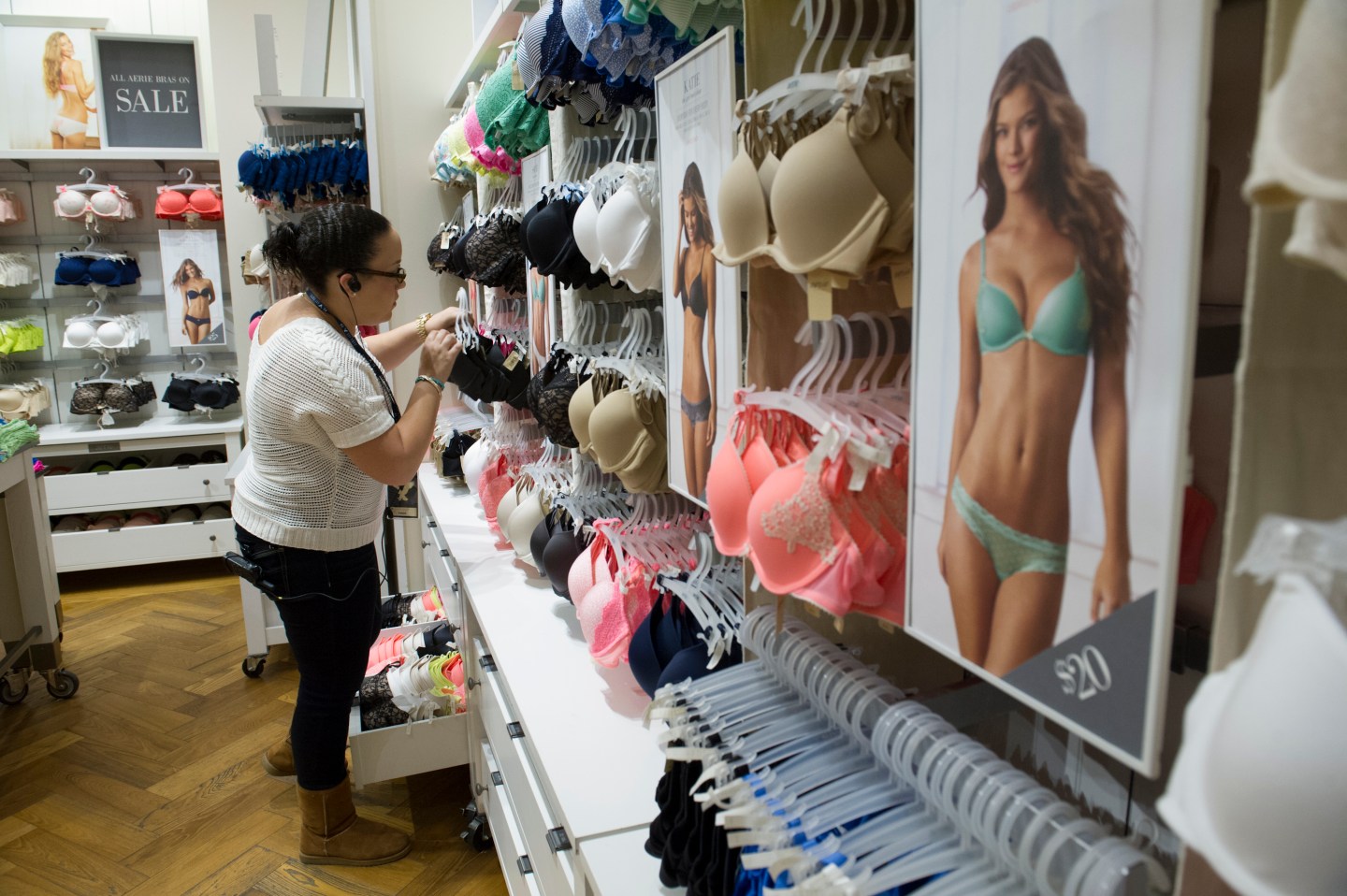 Is Victoria’s Secret starting to lose its relevance, even a little bit?

But the hyper-sexualized brand, with its propensity to airbrush models, has come under fire. Young women especially chafe at the whip-thin models who are airbrushed. Indeed, another sexed-up brand, Frederick’s of Hollywood, recently shuttered its brick-and-mortar stores due to declining sales.

Although Victoria’s Secret is not in danger of losing its dominance any time soon, says retail consumer analyst Kristin Bentz, there are competitors nipping at Victoria’s Secret’s heels. And they’re using more natural-looking models and selling more practical merchandise. Here are five challenging Victoria’s Secret’s stranglehold on the lingerie market:

No retouching, no airbrushing. That’s the mindset at this 10-year-old lingerie brand whose parent company is popular teen retailer American Eagle. Aerie takes a hard line against artificially “perfecting” the images of its models. “AerieREAL is about celebrating young women as they are,” Jen Foyle, Aerie’s global brand president, tells Fortune, referring to the company’s campaign against manipulating images.

“Embracing a more realistic image of young women and promoting body positivity has deeply resonated with our customers,” Foyle says. Aerie’s customer base has grown by more than 10% in the past year, and, Foyle reports, the company has delivered seven consecutive quarters of comparable sales and earnings growth.

Above is a plus-size model in an Aerie ad, as part of its campaign around National Eating Disorders Week.Courtesy of Aerie

Sexy at any size—delivered: ADORE ME

This “subscription-box” company delivers pretty underthings from a customized showroom of items directly to members’ doors each month.

No wonder it’s struck a chord with millennials, the coveted under-35 cohort that’s comfortable conversing with brands digitally and shopping from mobile devices. Indeed, 70% of the brand’s traffic originates from its mobile app, says Adore Me founder and CEO Morgan Hermand-Waiche.

Adore Me lingerie and related merchandise is designed by a former Victoria’s Secret chief of creative. Among its own secrets to success: It operates as a subscription-only membership service, launches 30 to 40 new items a month, and offers a wide range of cup sizes—from 30A to 44G. Adore Me also uses smart engagement across social media, mobile, email, and TV-exclusive promotions. Early product launches, sweepstakes, and giveaways challenge Victoria’s Secret in-store discounts.

Adore Me lingerie, made in extended sizes Courtesy of Adore Me

So the two, friends since college, set out to upend the market in 2014 with lingerie designed and built by women, for women. The result is Negative Underwear, whose goal, they say, is to sell confidence that isn’t in the form of bows or push up pads. “Confidence is the real sexy,” one says.

The company says its signature soft and minimalist pieces, available online and via trunk shows, are drawing customers in the 18-24 and 35-44 age ranges. A privately held company, Negative Underwear doesn’t divulge its numbers, but the founders say that revenue increased 150% between 2014 and 2015, and that this year is on track to double last year’s results.

It doesn’t matter if a store’s dressing room is papered in pink and has a cushy chair. Getting fitted for a bra can rock anyone’s confidence, as Michelle Lam experienced. The CEO and founder of True&Co. discovered that more than 80% of women are wearing bras that don’t fit, in part because no one wants to get measured.

Lam’s background in data science led her to avoid the traditional band and cup size, and focus instead on the shape of the breast. True&Co.’s five-minute “Fit Quiz” uses big data and algorithms to lead shoppers to lingerie that will flatter, regardless of shape.

Now that more than two million women have plugged in their personal measurements and provided feedback on what they love or loathe, True & Co. says it has acquired 60 million pieces of proprietary data that they use to refine fit recommendations and to design their own lingerie. A new “Try-On Truck” and catalog integrate customers’ online records and offline interactions.

ThirdLove has also challenged the traditional sizing that is a Victoria’s Secret mainstay. By aggregating tens of thousands of real women’s measurements through its app, the company created half-cup sizes (i.e. A 1/2 , B ½, C ½), which founder Heidi Zak says has completely changed the way women buy bras. “Thirty-five percent of our bras sold in the A-E range are in these exclusive half-cup sizes,” she tells Fortune.

Since launching in 2013, revenue has grown 400% year over year, Zak says. “Our success is also shown through our substantial repeat purchase rate—on average, a woman purchases new bras every 12 months, but the average ThirdLove customer purchases a second bra within just 45 days,” she says.

More than 30% of women need bras in half sizes. ThirdLove created them.

ThirdLove says more than 30% of women need bras in half sizes; it created them. Courtesy ThirdLove

Correction: An earlier version of this story incorrectly referred to ThirdLove as Third Love. Fortune regrets the error.