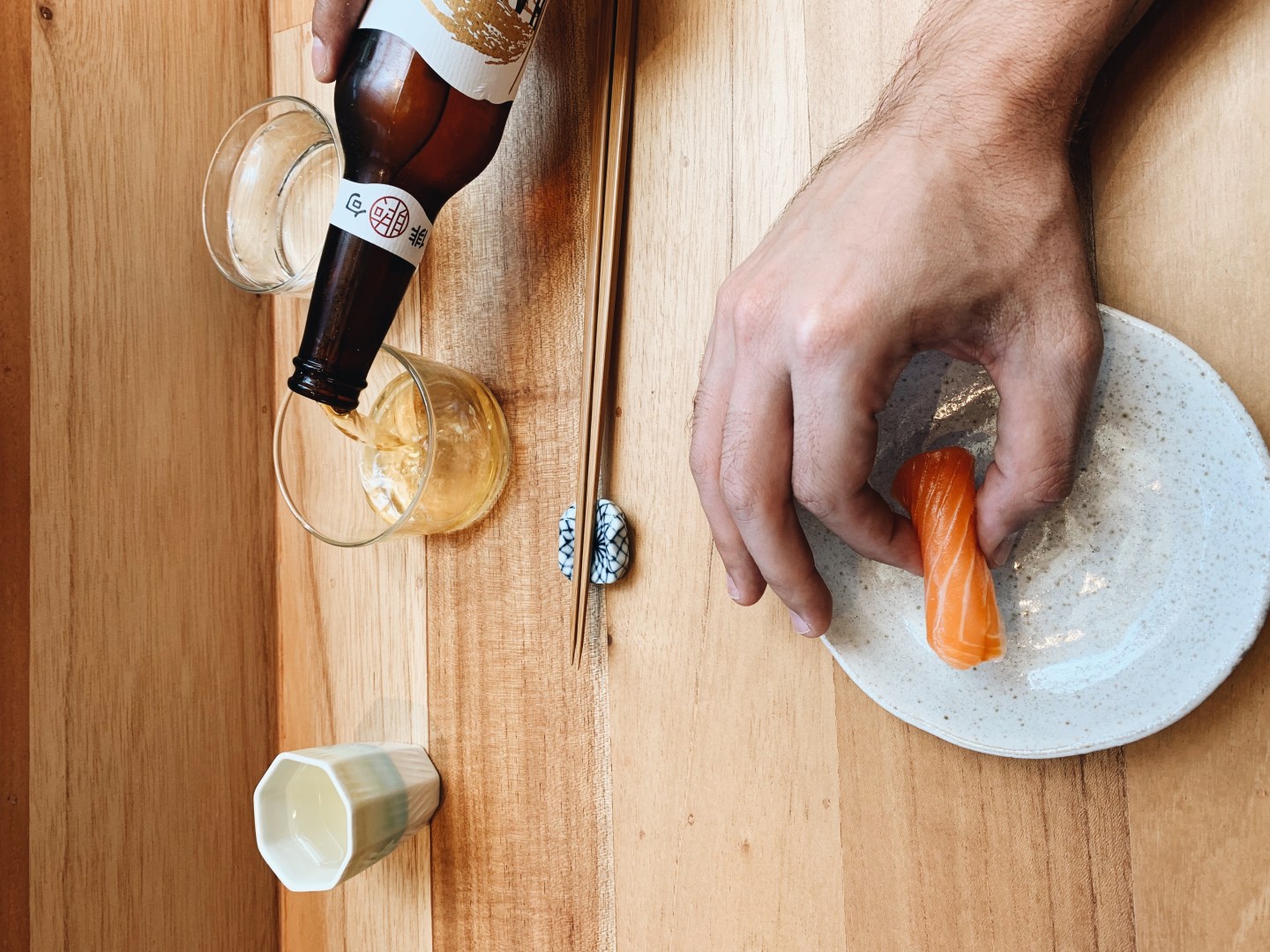 The restaurant serves Mexican sake, made in the state of Sinaloa by a company that also brews the rice lager beer Haiku.
Misaki

Seats at the sushi bar of Misaki, newly opened in Los Cabos, look out from just high enough of an angle that the blond wood of the window frames only the ombré of blues, from endless sea meeting clear blue sky. Looking down at the table, a sampler of tuna sashimi echoes the coastal ombré—this time in shades of pink, presenting the jewel-toned akami, the slightly fattier cut of chutoro, and the pale pink of the meltingly tender and much-coveted belly called toro.

The food—and the service and setting inside—evoke that of the highest-end sushi restaurants around the world. But most of the seafood and the views of the Pacific Ocean feature the best of Mexico.

The enmeshing of Japanese culinary traditions with Mexican ingredients brought restaurateur Edo López acclaim in Mexico City, where he all but owns a corner of Cuauhtémoc now known as Little Tokyo. López’s restaurant group, Edo Kobayashi, is named after his mother’s maiden name; his grandfather fled to Mexico during World War II. Thus, the Tijuana native marries his Japanese heritage with his native country’s ingredients, starting with his first restaurant, Rokai, which serves a sushi menu and omakase, similar to what Misaki offers.

But there’s also the Japanese whisky bar (Tokyo Music Bar), a natural wine and bar-food stand-up-only spot (Le Tachinomi Desu), and more—including ramen, yakitori, coffee, pizza, and other assorted partnerships—that bring López’s Japanese-Mexican influence to San Diego, Miami, and New York City. Now, López brings his expertise to the Pacific coast, installing a restaurant mere feet from the ocean, in a place where seafood has always held court as king, but sushi has not.

López’s restaurants are as sharp and precise as the knives Kazuki Takubo, Misaki’s chef, uses to slice fish. That remains true here, at his latest, perched atop the Solaz resort complex. “We bring the most Japanese experience we can,” explains a server. “The same glasses, plates, and techniques if you went to Japan.”

But there are slight differences in the ingredients, and those are the places where Misaki becomes most poignant on the drinks menu: in the coriander and nopal (cactus paddle) cocktail with gin, tonic, and cilantro; and in the Mexican sake, which comes from a company just across the Gulf of California in the state of Sinaloa that also brews the rice lager beer Haiku. Much of the fish comes from Ensenada, up north on the Baja Peninsula, and just south of López’s hometown: It arrives unmarred, immaculate, and fresh, ready to be coddled by the chefs.

At the sushi bar and tables in the main room, the à la carte menu offers classic izakaya-style starters like gyoza, Japanese fried chicken, and tempura. The difference is in the ingredients and execution: The Pacific shrimp encased in the tempura remain ebullient with brightness through the frying; and the fresh baby corn—a far cry from the canned version seen in the U.S.—alludes to Mexico’s most sacred ingredient. Donburi, or rice bowls, are the most affordable options, starting at about $17 for a tempura bowl, with a chirashi (assorted fish over rice) coming in at about $30.

Though the restaurant’s prices reflect the care put into the meal, the skill of the chefs, and the luxury resort location, they still fall somewhat below what you’d see at comparable New York City or Los Angeles restaurants. Rolls start at $3, nigiri at $5. But the true treat comes from indulging in the luxury of the full omakase menu, available only in the six-seat back room. Running from $120 to $150 per person, depending on what the chef’s whims are that night and which fish is fresh, it sticks close to the classic edo-style of sushi, offering a parade of unique, pristine pieces of nigiri, subtly nudged with flavor and handed directly over the counter by the chef.

Behind the sushi bar, the chef uses circular motions to grate sushi’s own sacred ingredient: wasabi. The traditional sharkskin grater makes quick work of the Japanese root—the result milder, sweeter, and more complex than the paste seen at lesser shops; there’s no burning or nostril-clearing feeling. Served alongside sea bass with yuzu kosho (a mix of Japanese citrus and peppers) or accompanying a bit of akami brushed with a soy-sauce-ginger-garlic mix, it provides a tiny boost of heat.

The fish served are mostly familiar to sushi fanatics, with a few exceptions, most notably totoaba. After it was nearly fished into extinction in the late 20th century (prized in Mexico for the flavor of its meat and in China for its swim bladder), the large drum fish endemic to the region has since been successfully farmed. Served with a touch of white soy sauce and salt, it is vaguely reminiscent of the sea bass served just before it, but is more tender, subtle, and complex—a treat for seasoned sushi eaters looking for a new taste. Even familiar fish come in intriguing and innovative ways—like the kampachi topped with a pesto of spring onion and ginger.

The omakase is a meandering, captivating exploration of Baja seafood through Japanese culinary eyes, with just a few deviations (the salmon, for example, comes from New Zealand). And while the grand finale might not have as much to do with the greater location of Baja, nothing screams indulgent sushi meal at a luxury resort in quite the same fashion as an eel and foie gras hand roll topped with shaved truffles.

—Here’s how to get a degree in gelato