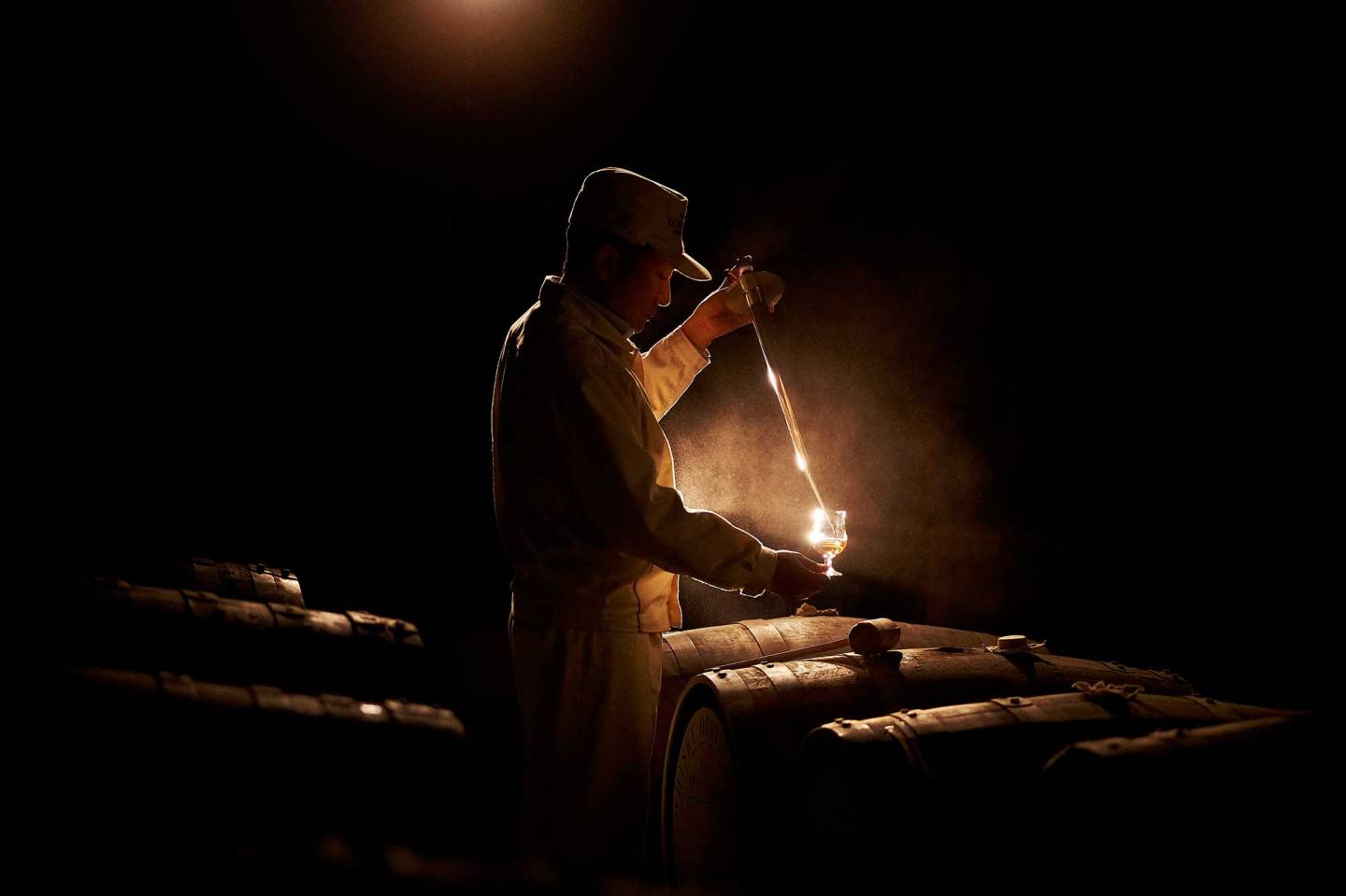 For more than a millennium, a quiet but mighty lifesource has drawn people to a region in Japan that straddles the modern-day Osaka and Kyoto prefectures. Here, at the base of Mount Tennōzan and at the confluence of three rivers, mineral water flows with such purity that it was recorded in an ancient collection of Japanese poetry during the Nara period, some 1,200 years ago.

Centuries later, celebrated tea master Sen no Rikyū chose the area and its water source, or Minase, to build his teahouse. At the beginning of the 20th century, the water’s lore attracted a young entrepreneur named Shinjiro Torii to the small town of Shimamoto. Perhaps this fabled water could be the wellspring he’d been searching for, the missing component in his latest endeavor and the one closest to his heart: developing a whisky delicate enough to please the Japanese palate.

And thus, Japanese whisky was born.

But what makes a whisky Japanese? To figure that out, and to learn how Shinjiro Torii’s Suntory Spirits has become a legend in itself, Fortune ventured to where the fabled Minase waters flow to visit the Suntory Yamazaki Distillery, the first commercial whisky distillery Japan ever saw.

Nearly 100 years after Shinjiro selected Shimamoto as the site of his first distillery, Suntory Holdings Limited is a consumer product giant, reporting more than $23 billion in revenue last year from a range of food, beverage (beer, wine, and spirits), and even health and wellness goods. (In 2014, Suntory announced a $16 billion takeover of Beam Inc., which includes Jim Beam and Maker’s Mark, becoming one of the top five largest liquor distributors in the world.)

But water is still at the core of Suntory’s mission, and whisky—particularly the Yamazaki, Hakushu, and Hibiki labels—its celebrated hallmark. Such is their popularity that the bottles can be tricky to track down, and not just in Western markets. Even Suntory distilleries limit the number of bottles released each morning in their own souvenir shops.

In total, there are three distilleries in the whisky segment of the Suntory Spirits empire, and while Yamazaki is the most famous, each has its own character. At Hakushu, an idyllic mountain distillery a few hours outside of Tokyo, water carried down from the Japanese Alps that’s naturally far softer than Scotch distilleries complements the eponymous whisky’s characteristic smokiness. Chita, set against the backdrop of the Aichi Prefecture’s coast, is the only to distill grain whiskies. Yamazaki, however, is Suntory’s flagship distillery, built in 1923 to use the same legendary water source noted throughout history. But because Japan had no commercial whisky distillery before Yamazaki, Shinjiro had a unique opportunity—he got to decide what Japanese whisky would be.

Shinjiro was born at an auspicious time in Japan’s history, shortly after the samurai era came to a close and when the country was eager to join the global conversation. After working in shops as a boy, he opened his own import store in 1899. But Torii Shoten, Shinjiro’s small wine store in Osaka, was merely a study to advance his true ambition of producing on Japanese soil the very styles of wines and spirits he imported. It took nearly a decade, but in 1907 he released Akadama Port Wine (still in production today as Akadama Sweet Wine), the popularity of which funded construction of Yamazaki Distillery.

Though Shinjiro is widely regarded as the father of Japanese whisky, the founder of competitor Nikka Whisky also claims the title. Shinjiro had enlisted the help of Masataka Taketsuru, a young man who studied whisky in Scotland, for Suntory’s first whisky attempt, which failed gloriously. Released in 1929, the Shirofuda (or White Label) whisky and its bold smokiness was too forward too fast for a population that favored subtler flavors. As Suntory global brand ambassador and former master distiller Mike Miyamoto explains, it’s the equivalent of visiting Japan for the first time and sitting down to a truly authentic Japanese meal—it would be simply too foreign to enjoy. The pair parted ways, and Masataka founded Nikka Whisky shortly thereafter.

After that, it took some time for Shinjiro to land on a method and recipe that Japanese drinkers could embrace. But in 1937, Suntory Whisky (also known as Kakubin, so called for its square bottle) did just that. The secret formula? Japanese craftsmanship.

The Danish have hygge, that untranslatable feeling of coziness, but the Japanese have monozukuri. A nuanced term and relatively new to Japan’s lexicon, monozukuri refers to manufacturing and production, but with a commitment to craftsmanship and continued improvement and an emphasis on the act of making. In a way, the word blends Japan’s tradition of ritual and practice with its evolving industry.

In essence, that’s what informs Suntory’s practice. The company’s heart beats philosophy, employing balance and harmony in the whisky-making while drawing upon intrinsic Japanese values, including reverence for nature. While Suntory had the benefit of defining Japanese whisky to a degree, its blenders didn’t have the access to variety that Scottish producers did. Yamazaki had to produce its own library of distinctive whiskies in order to create complex commercial spirits, evidence of which is on display in the museum at Yamazaki Distillery, with thousands of bottled whisky expressions spanning decades lining the walls from floor to ceiling.

Every whisky that goes to market, including the single malts, benefits from precise blending orchestrated by Suntory’s lineage of master and chief blenders. The rich, complex profile of Hibiki Japanese Harmony, for instance, represents all three distilleries in five primary component parts: Yamazaki’s American white oak, sherry, and mizunara (or Japanese oak) malt casks, plus Hakushu’s smoky malt and Chita’s grain whisky. The Yamazaki 12-year, on the other hand, is made solely of malt whiskies from the Yamazaki distillery, namely those aged in white oak, sherry, and mizunara casks.

Basically, it’s the flavor equivalent of painting a sun by mixing together the hues yourself as opposed to using a premade orange watercolor pan—the dimensional complexity is tangible.

You can taste it for yourself at the Yamazaki Distillery, which is open to the public and easy to access, just a short subway ride from both Osaka and Kyoto and a 10-minute walk from Yamazaki Station. There’s no cost to wander the grounds and explore its museum and extensive whisky library, but a reservation is required. You can also sip your way through specialty and hard-to-find pours available for purchase at the tasting counter. It costs about $10 U.S. for a guided tour (tasting included) through the production facilities, a highlight of which is learning about the tricky mizunara barrels, which are handmade by Suntory’s own coopers. But take note: Tours often fill up weeks in advance, so plan accordingly—by which we mean start in the on-site souvenir shop to score those limited-release bottles, bound to sell out by lunchtime.

The House of Suntory is more than its parts—more than whisky or sweet wine, more than sakura-infused gin and canned coffee, more than the varied products of one man’s vision. Because even though Suntory is known as the founding house of Japanese whisky, what’s not as widely recognized is that Shinjiro, by way of his company, is responsible for bringing Western bar culture to the East, introducing not only products but also ideas previously foreign but now deeply ingrained in Japanese culture.

The first nude advertising poster in Japan’s history was a promotion for Akadama Port Wine in 1922 (and went on to win first prize at an international poster competition in Germany). In 1931, Suntory hosted the country’s first cocktail competition. The post-war era saw Torys Bars—watering holes named for Torys whisky that served basic cocktails featuring Suntory spirits—popping up across Japan. By 1960, Suntory had introduced its first highball in a can, now a staple of social drinking.

Today, bars in Japan and beyond carry Suntory highball machines, which are partially responsible for egging on the latest highball revival. Part refrigerator and part tap, the machine pours a perfect whisky-soda highball every time, low in alcohol content but highly refreshing. The U.S. got its first highball machine not long after the 2016 launch of Toki, the first of Suntory’s whiskies to be available in the States before Japan, and the buzz it has created keeps growing.

In many ways, Shinjro’s no-longer-modest venture has come full circle, from importing Western goods and trends to nearly being sucked dry by Western demand, continuously finding ways to keep everyone’s glass half full.