Inclusion Was the Winner of the Democratic Debate: RaceAhead 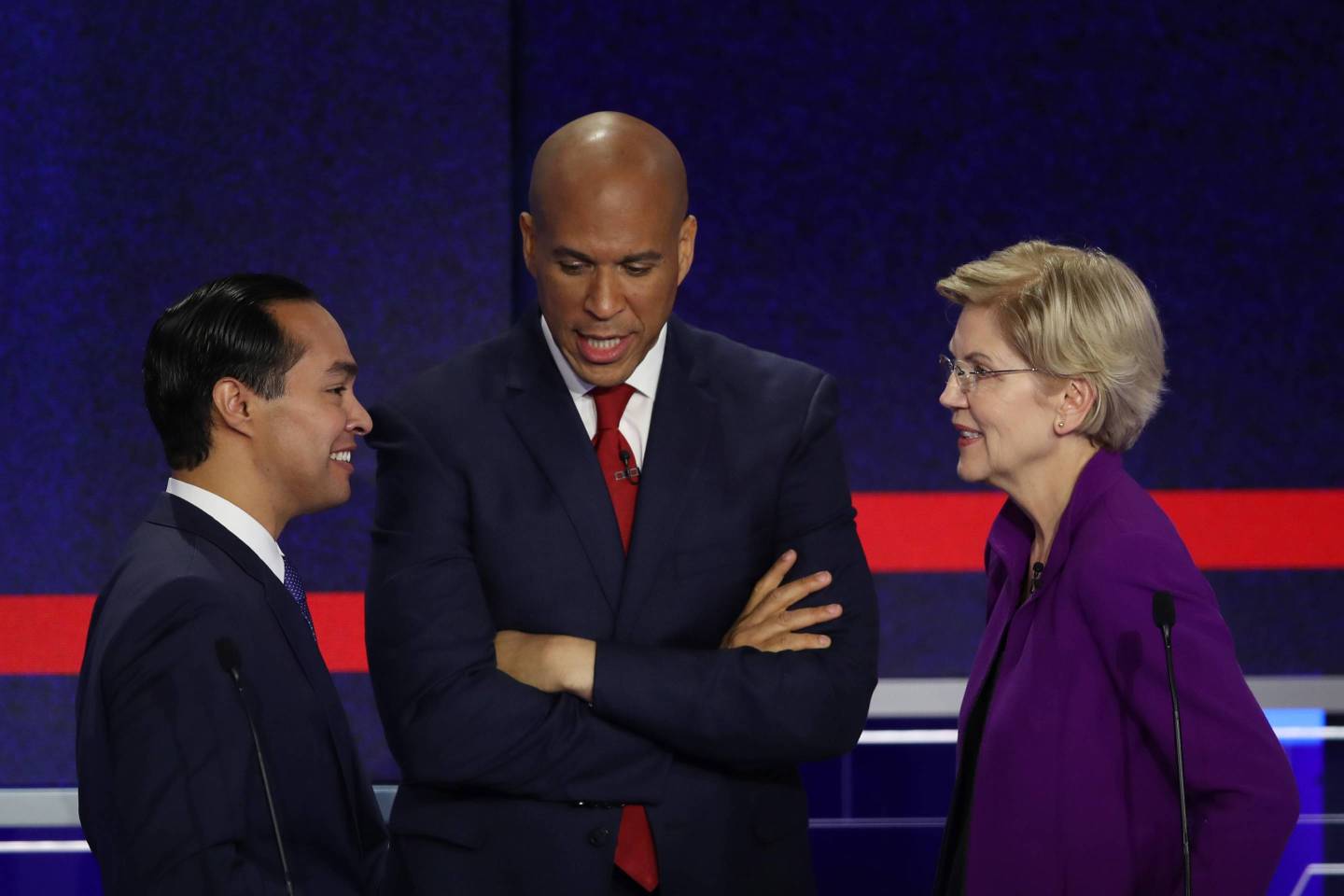 The first of two Democratic presidential debates are in the can, with the second one coming at us like a freight train. (Fortune’s got you covered on what to expect tonight here.)

Last night’s event brought out the chatty in all social networks, and the memescame early and often. (Mirándote, Señor Beto.)

Most observers, myself included, thought that Senator Elizabeth Warren won the evening, in part by coming prepared to explain her broader vision for the role of government in the lives of middle class and struggling families, but also by being the candidate against whom the others were measured. Right off the bat, her fellow debaters were asked to respond to three of her plans: debt-free college, higher taxes for the ultra-wealthy, and her scheme to break up the big tech companies. Vox has a good breakdown here.

But she was not alone in performing well.

Senator Cory Booker earned high marks for his passionate response in favor of gun control, which earned him a meaningful spike on Google trends; and for reasons most New Yorkers can’t quite explain, Mayor Bill de Blasio seemed to read as accomplished and credible.

The person who needed to make up the most ground, however, was Julián Castro, who had been polling in the 1 percent range. He was poised and prepared, particularly when he fielded the first question on immigration. Castro had been the first candidate out with a plan — which he was sure to mention, but got everyone’s attention when he referenced by name El Salvadoran asylum seekers Óscar Alberto Martínez Ramírez and his 2-year-old daughter Valeria, who died this week after making a desperate attempt to cross the Rio Grande.

“This metering policy is what prompted Óscar and Valeria to make that risky swim across the river,” Castro said of the Trump administration policy of limiting the number of migrants who can request asylum. “They have been playing games with people who are coming to try and seek asylum at our ports of entry. Óscar and Valeria went to seek asylum and they were denied the ability to make an asylum claim. So they got frustrated and they tried to cross the river and they died because of that.”

Moments later, my colleague Mark Dent explains, Castro brought up his plan to repeal section 1325 of the Immigration and Nationality Act and make border crossing a civil, not criminal offense, which prompted an uncomfortable exchange with fellow Texan, Beto O’Rourke.

But if you look past applause lines, the occasional sharp elbows, and the awkwardness of the random Spanish-language answer, inclusion was the big winner last night. And that may be more important than politics as usual, at least at this stage of the game.

Castro said some other names, too. “What about Eric Garner, Tamir Rice, Laquan McDonald, Sandra Bland, Pamela Turner, Antonio Arce?” he asked, naming black or brown people who had been killed by the police. “I’m proud that I’m the only candidate so far that has put forward legislation that would reform our policing system.” A Twitter account run by friends of Garner’s late daughter “noted and appreciated,” the mention.

And in a first, Castro mentioned transgender people, unprompted, in an answer about abortion care.

In a conversation about “reproductive justice,” he said, “And, you know, what that means is that just because a woman — or let’s also not forget someone in the trans community, a trans female — is poor, doesn’t mean they shouldn’t have the right to exercise that right to choose,” Castro said.

Booker also mentioned the “epidemic” of violence against transgender people. “We do not talk enough about trans-Americans, especially African American trans-Americans . . . and the incredibly high rates of murder right now,” Booker said. Warren even casually dropped “Latinx” into an answer, a nod to the gender-neutral term for people of Latin American origin.

“To hear someone specifically mention transgender rights in a context that wasn’t forced is enormous for us,” Charlotte Clymer, a transgender activist and spokeswoman for the Human Rights Campaign told The Washington Post. “It felt powerful in that moment.”

A nation that’s fluent in the languages of gender and racial inclusion is a distant dream, I know. But it makes a difference when powerful people talk the talk in public, even if you don’t like their politics, even if they don’t get it exactly right the first time.

Two SCOTUS decisions have big implications for politics and governanceEach ruling offers a victory to one of the two major political parties. The first delays the addition of a citizenship question to the 2020 census, a move which could have triggered a massive undercount of vulnerable populations. The other decision removes the opportunity of federal review in even the most extreme examples of partisan gerrymandering in state voting districts. “We conclude that partisan gerrymandering claims present political questions beyond the reach of the federal courts,” Chief Justice John G. Roberts Jr. wrote in the 5-4 majority opinion. New York Times

But when nationalism has successfully dehumanized the other, there is no breaking through, and people who imagine that a photographic message must assuredly be so powerful that it will touch all hearts are forced to grapple with a more confounding truth: Not all consciences operate alike, not everyone is susceptible to what seems a basic, even rudimentary level of empathy. And so, there is a paradox: We resist the idea of living in an us-vs.-them world only to find that our basic sense of “us” is already fractured. We look out at our fellow humans and can’t honestly understand how their minds work. At some level, we think, “Can’t you see what is happening in this image?” As if seeing and understanding are identical.—Art critic Philip Kennicott on the image of the bodies of Salvadoran migrant Óscar Alberto Martínez Ramírez and his nearly 2-year-old daughter, Valeria