Mudslinging and Mirth: What to Expect During Wednesday’s Democratic Debate 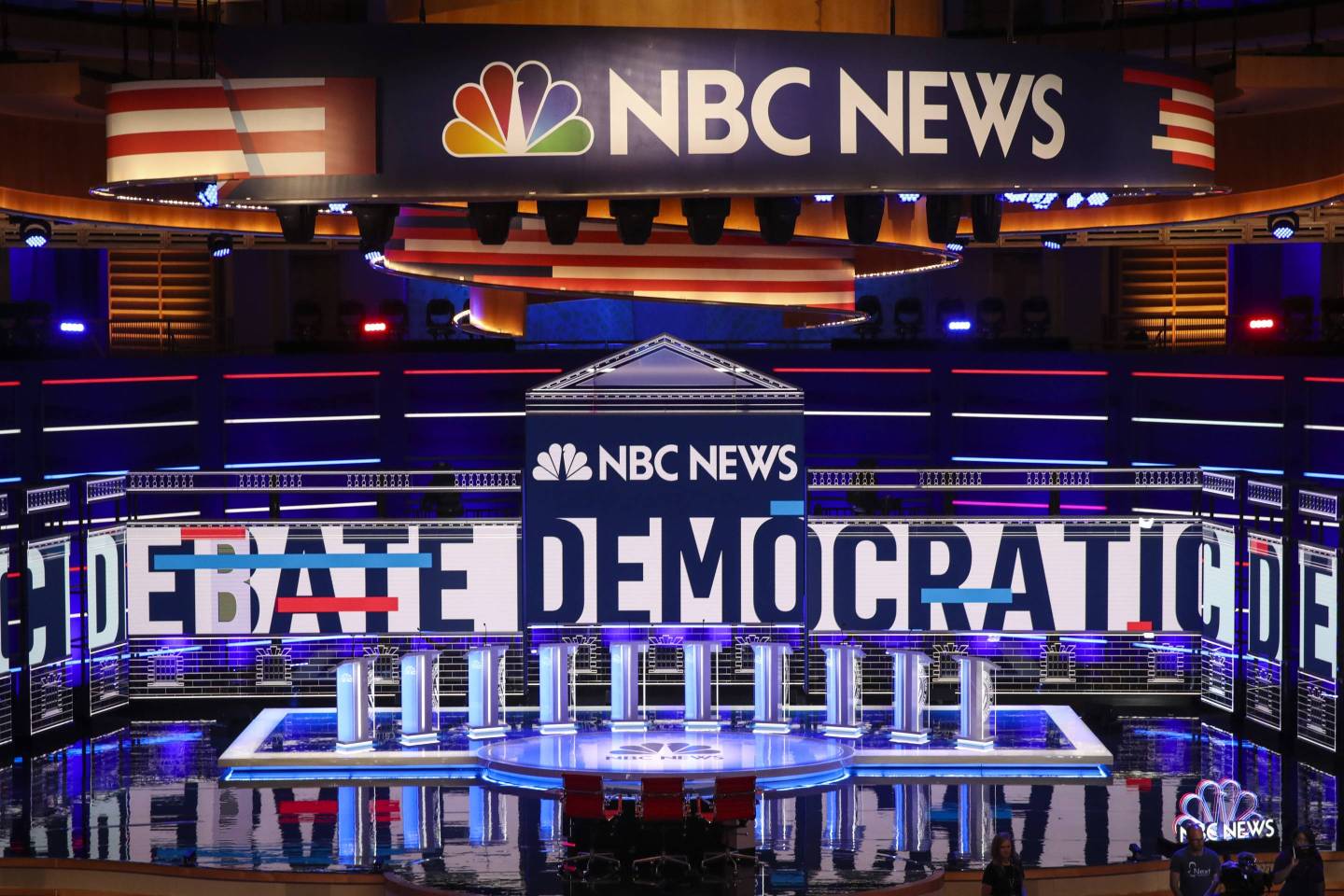 MIAMI, FL - JUNE 26: The stage is set for the first Democratic presidential primary debate for the 2020 election at the Adrienne Arsht Center for the Performing Arts, June 26, 2019 in Miami, Florida. A field of 20 Democratic presidential candidates was split into two groups of 10 for the first debate of the 2020 election, taking place over two nights at Knight Concert Hall of the Adrienne Arsht Center for the Performing Arts of Miami-Dade County, hosted by NBC News, MSNBC, and Telemundo. (Photo by Drew Angerer/Getty Images)
Drew Angerer Getty Images

With U.S. Sen. Elizabeth Warren of Massachusetts the only candidate in Wednesday’s spread of 10 consistently polling as a top-five contender, several lesser-known candidates will use the opportunity to be seen and heard. There also is likely to be banter over a lot of issues that have not recently grasped the public’s attention but will probably be part of the campaign discourse.

“Elizabeth Warren is going to have a lot of pressure on her in part because she’s the only first-tier candidate who will be on the stage the first night and secondly, because of pretty high expectations for how she’ll perform,” Kilgore said. “She was a championship debater going back to high school and she has a pretty impressive set of policy proposals,” the consultant added.

He referred to Warren’s ideas that include breaking up tech giants such as Facebook and Google to create a more equitable and competitive marketplace, and taxing the very rich to fund universal child care and pre-K programs.

The Washington-based consultant noted there have been predictions that Wednesday’s faceoff will be negative and aggressive. Candidates will need to watch for that, he said.

“It’s high stakes because if you act over aggressive you do look desperate and you might do the winnowing yourself,” according to London. “I think the candidates will have to be careful about how they sling.”

The public also can expect candidates to bring up age-old issues such as the 1994 crime bill and the 2005 bankruptcy bill, said Democratic strategist Rebecca Katz. Today’s candidates often say both pieces of legislation go against their beliefs.

“I think what will be so surprising is how much of the past we may be discussing,” Katz said. “Some of these politicians have a long history in government and (U.S. Sen. Bernie) Sanders (of Vermont) and (former Vice President Joe) Biden have cast many votes.”

Even more significant, she said, is that Wednesday will present a unique opportunity for the public to see three women candidates on the stage.

Lester Holt and Savannah Guthrie of NBC News, Jose Diaz-Balart of Telemundo and NBC News, Chuck Todd of NBC News and Rachel Maddow of MSNBC will moderate. Candidates will have up to 60 seconds to answer questions.

The Democratic National Committee chose to spread the first debate over two nights because of the large number of candidates who qualified to take part based on number of donors and poll numbers. Higher polling candidates will be at the center of the stage, meaning that Warren and former O’Rourke will stand next to one another center stage. O’Rourke’s poll numbers have been sliding, and he likely will feel the pressure to perform well and raise his numbers, political watchers are saying.

One factor that will not be president on the first night is Democratic frontrunner Biden, and this also is likely to affect the dynamics on Wednesday night, experts said. This will present an opportunity for candidates to take shots at the former vice president without him being able to immediately respond.

As for members of the public who are still trying to figure out the difference between 20 candidates, London advises viewers to pay attention.

London added, “At the end of the first night there’s going to be one or two people who have been written off, who people are going to say after this debate, ‘Wow, they were impressive.’ “