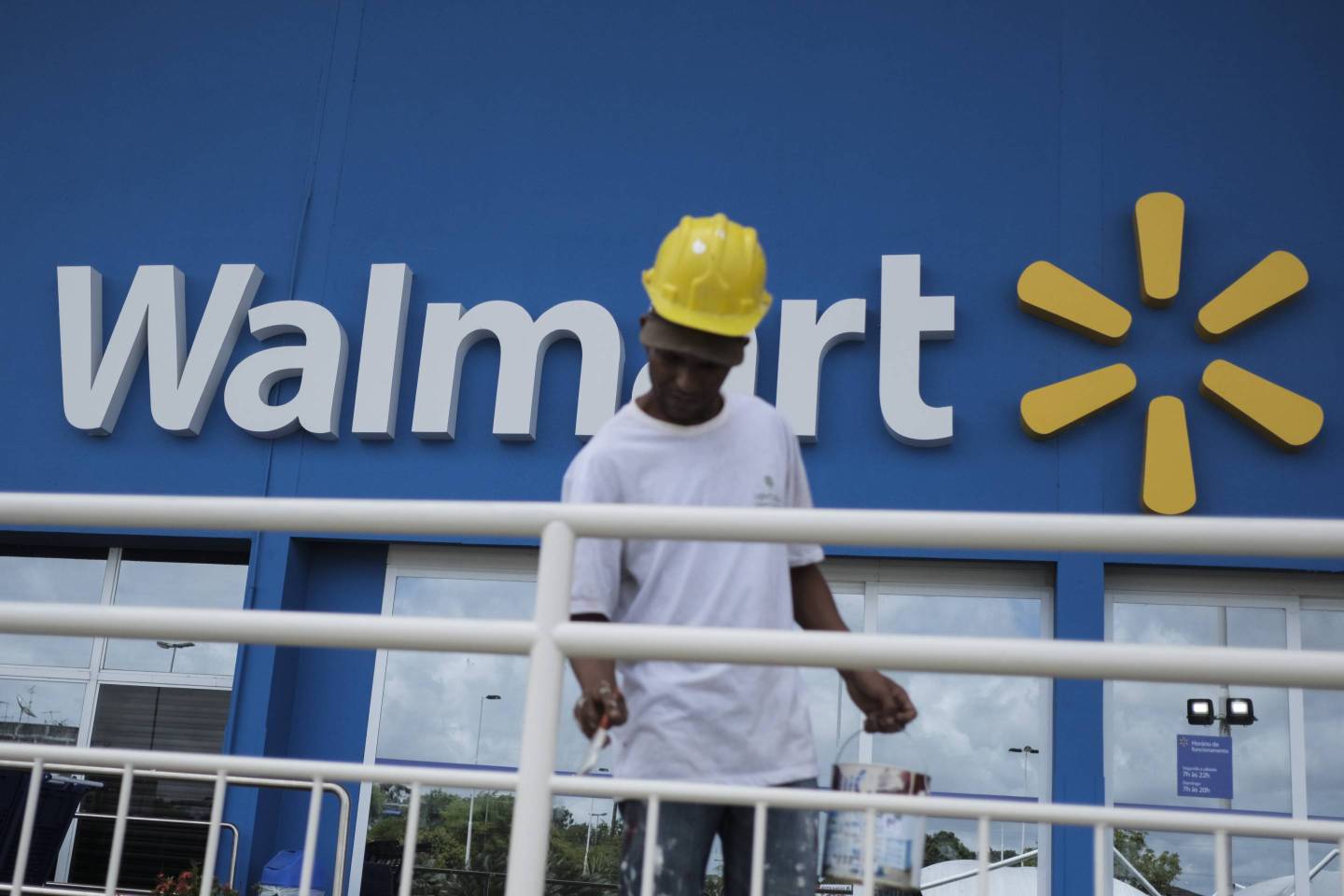 A worker painting the crates of a Walmart store for an inauguration in the city of Recife, in the Northeast of Brazil, on December 6, 2017. The Brazilian unit of Wal-Mart Stores has decided to integrate its physical retail and e-commerce activities along with a campaign to renovate its stores, the company said on Tuesday. (Photo by Diego Herculano/NurPhoto via Getty Images)
NurPhoto NurPhoto via Getty Images

Walmart Inc. has agreed to pay $282 million in penalties and a Brazilian unit admitted to violating a U.S. anti-bribery law, providing a relatively subdued ending to a seven-year investigation that spanned the globe and at one point looked poised to yield record foreign-corruption fines.

In parallel announcements on Thursday, the Justice Department and the Securities and Exchange Commission faulted the country’s largest retailer over payments made to fast-track store openings in Mexico, China, Brazil, and India. Walmart will pay about $138 million in criminal penalties and $144 million in disgorgement to resolve the SEC’s allegations.

WMT Brasilia pleaded guilty Thursday to failing to keep accurate records, while the U.S. parent reached a non-prosecution agreement with the Justice Department over violations of the Foreign Corrupt Practices Act. The company will have a compliance monitor for two years as part of that accord and Walmart Chief Executive Officer Doug McMillon said the company is “committed to doing business the right way.”

The retailer’s operations in Brazil are currently handled by a company called Walmart Brasil, which is 80% owned by private-equity firm Advent International.

The entity that pleaded guilty, WMT Brasilia, “was and always has been a holding company,”
according to a Walmart spokesperson. “Today it has ownership of the entity which owns 20% of the current business after we sold it last year.”

The resolution, disclosed in court filings in Virginia and press releases, was a muted end to what was once seen as a case targeting high-level officers. At one point, people familiar with the probe have said, U.S. authorities were asking up to $1 billion in penalties. While the penalty is about one-sixth of the $1.78 billion levied last year against Petroleo Brasileiro SA in one of South America’s biggest corruption scandals, Walmart wound up spending about $1 billion in legal fees and an overhaul of its compliance systems.

“The case may not have turned out to be as good or as fruitful as the government thought,” said Michael Koenig, a former federal prosecutor now a partner at Hinckley, Allen & Snyder. “This notion that the government is only successful if it gets a conviction or a billion-dollar settlement is just plain wrong. You have to go where the investigation leads and what may have started out as thinking this was going to be the greatest investigation since Enron for a host of reasons turned out not to be what the government thought.”

The expectation of what the Walmart investigation might reveal were set by a series of articles in the New York Times in 2012 outlining details of allegations the retailer paid some $24 million to Mexican officials to win quick zoning changes, sidestep licenses, and environmental permits and deflect opposition to open stores, turning Walmart into that country’s largest private-sector employer.

Allegations that America’s largest retailer was running a pay-to-play scheme outside the U.S. gave a boost to the Justice Department’s FCPA unit, which had suffered some high-profile court losses and was defending attempts by business interest groups to rein in its prosecutors.

But the Walmart case posed challenges for investigators. Much of the conduct uncovered in Mexico, for example, couldn’t be used as evidence because it was too old, people familiar with the matter have previously said. So the government sought to build stronger cases in other countries. In Brazil and India, investigators found more recent examples of what they believed were improper payments, yet struggled to find examples of rampant misconduct in China, the people said.

In the closing days of the Obama administration, Walmart balked at demands to pay more than $600 million in penalties, leading prosecutors to go back to gather more evidence from witnesses, people familiar with the matter told Bloomberg at the time. That, in turn, led to a lengthy secret court battle over whether the Justice Department could bring Walmart’s internal lawyers before the grand jury. By this point, the investigation had already spanned more than five years.

In 2017, the company set aside almost $300 million for a possible settlement. Months later, a federal appeals court in Virginia blocked the Justice Department from interviewing Walmart’s lawyers, removing leverage the government had in the criminal case. The two sides became deadlocked for months over what misconduct the retail giant would admit to, a person familiar with the matter previously said.

On Thursday, the Brazilian unit admitted that $527,000 in improper payments to an intermediary were inaccurately recorded on financial records. Brazil employees logged those payments as going to construction companies when they knew the money was going to a former Brazilian government official, according to the plea agreement filed in Virginia. The former official’s ability to obtain licenses and permits quickly earned her the nickname “sorceress” or “genie,” according to the unit’s plea agreement. Walmart earned more than $3.6 million in profit from stores built by these construction companies.

The non-prosecution agreement with the U.S. outlines much broader conduct that prosecutors said ran from 2000 to 2011 and included Mexico, China, and India. Walmart executives were aware of problems regarding payments by the foreign subsidiaries to third parties but failed to stop them, according to the Justice Department.

No criminal charges against individuals have been brought.

—Walmart’s signature blue vests are getting a big redesign

—Apple is partnering with Best Buy for repairs. Will it fix consumers’ complaints?

—How Target is breaking away from the retail pack

Get Fortune’s RaceAhead newsletter for corporate culture and diversity insights.