Mark Stevens is Banned, But Here are the Other Tech Titans You May See Courtside on the Warriors’ ‘Billionaire’s Row’ 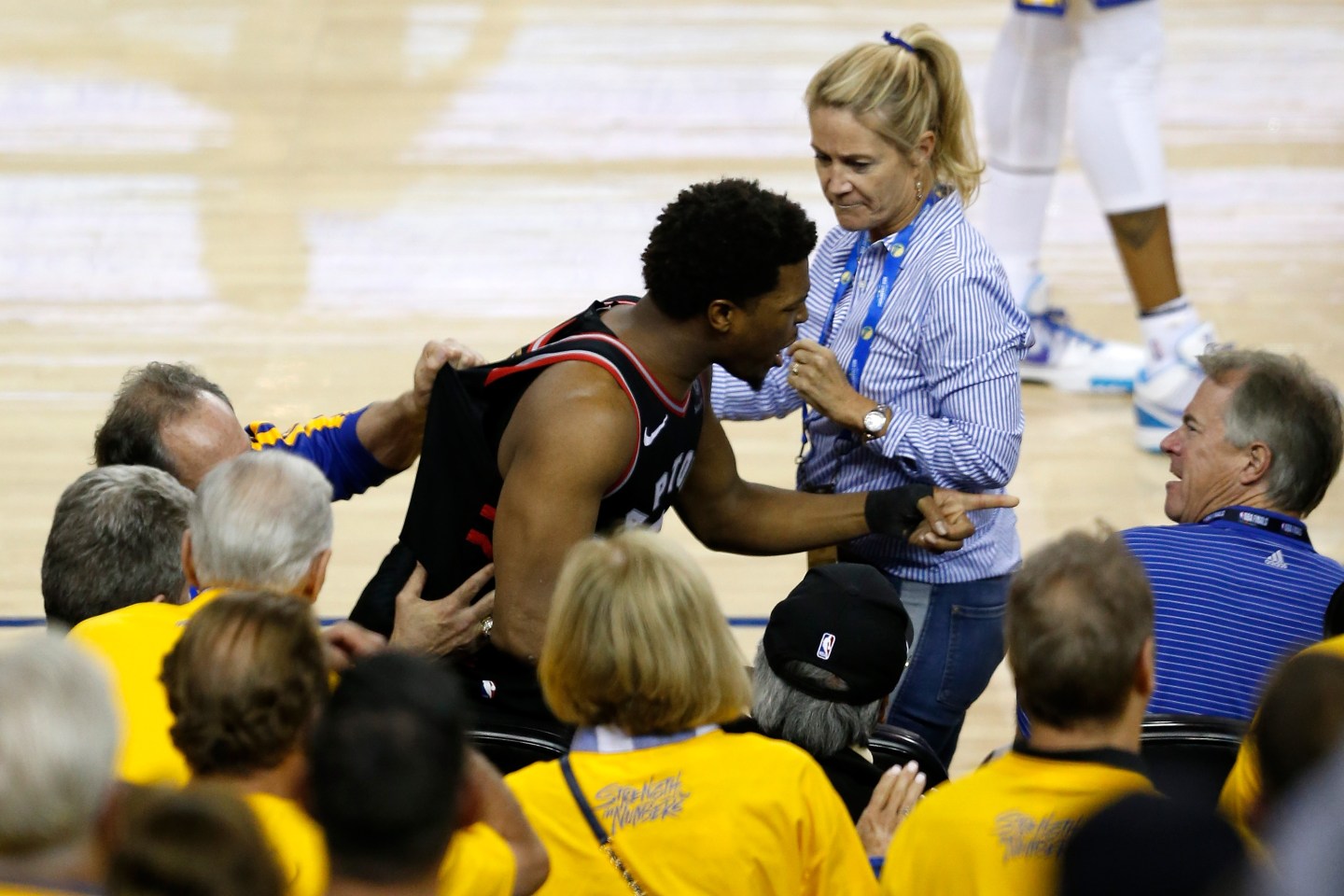 OAKLAND, CALIFORNIA - JUNE 05: Kyle Lowry #7 of the Toronto Raptors argues with Warriors minority investor Mark Stevens (blue shirt) after Lowry chased down a loose ball in the second half against the Golden State Warriors during Game Three of the 2019 NBA Finals at ORACLE Arena on June 05, 2019 in Oakland, California. According to to the Warriors, Stevens will not be in attendance for the remainder of the NBA Finals as they look further into the incident. NOTE TO USER: User expressly acknowledges and agrees that, by downloading and or using this photograph, User is consenting to the terms and conditions of the Getty Images License Agreement. (Photo by Lachlan Cunningham/Getty Images)
Lachlan Cunningham—Getty Images

It caused quite a stir when the conservatively dressed fan sitting courtside who shoved Toronto Raptors guard Kyle Lowry during Game 3 of the NBA Finals turned out to be Silicon Valley billionaire venture capitalist and Warriors minority owner Mark Stevens. He was consequently banned from attending games for one year, fined $500,000 and his stake in the team likely in jeopardy.

The incident cast a spotlight on a well-kept Warriors secret, which is that if you know who to look for, you can almost always spot a tech billionaire at a Warriors game. So much so that the courtside seats near the Warriors’ bench are often referred to as “Billionaire’s Row.”

It makes sense, given that Warriors co-owner Joe Lacob is also a longtime VC. Other regulars include Ben Horowitz, a co-founder and general partner at the VC firm, Andreessen Horowitz. Horowitz is considered good friends with Andre Iguodala, the Warriors’ swingman, and known for advising the basketball star along with Jeff Jordan, an Andreessen Horowitz partner.

Salesforce CEO Marc Benioff has been known to sit up close to watch the action at Oracle Arena, the Warriors current home in Oakland, California. Airbnb CEO Brian Chesky has also been spotted taking in games. Many front row fans likely left early Friday after the Warriors lost Game 4 to the Raptors 105-92 as Toronto now has a commanding 3-1 lead in the series.

One of the most boisterous Warriors fans is Eddy Cue, Apple’s senior vice president of internet and software services. He’s often seen jumping out of his seat during Warriors’ games. Cue is such a fan that he even tweeted a photo of himself wearing a huge gold and diamond-encrusted Warriors championship ring when the team won its first title in 2015.

At one game, Cue was seen apparently yelling at pop princess Rihanna, a Cleveland Cavaliers fan at the time, during the 2017 NBA Finals. Cue reportedly told others nearby to “tell that b- to sit down,” at the Grammy-winning singer’s direction. RiRi’s fierce legion of fans, dubbed “Rihanna’s Navy,” trolled Cue and Apple mercilessly on social media. This prompted Cue to respond via Twitter. “Nothing but love for Rihanna (and KD, too!) As usual, I was excited about our lead and actually talking to Marissa, 8 seats to my right,” Cue tweeted. While Cue didn’t mention who Marissa was, many assumed it was former Yahoo CEO, Marissa Mayer.

Indeed, the links between tech and the Warriors are so strong that star players Stephen Curry, Kevin Durant, and Iguodala have invested in several startups.

Curry has invested in CoachUp, a startup that pairs private coaches with young athletes, SnapTravel, a Toronto-based startup that promotes simplifying the hotel booking process by making reservations on message platforms like WhatsApp, and Pinterest. Durant has invested in online food delivery service Postmates and Acorns, a micro-investing app.

Iguodala has invested in the Arianna Huffington-backed Thrive Global, a health and wellness site; Walker & Company, a health and beauty startup targeted to people of color, and The Players’ Tribune, the media platform allowing athletes to write first-person accounts founded by baseball legend Derek Jeter.

One of the team’s main sponsors includes e-commerce site Rakuten (their logo is on the team’s jerseys), and its new tech-enhanced arena in downtown San Francisco opening this fall will undoubtedly mean more techies will attend.

Expect to see even more billionaires in attendance once they don’t have to cross congested traffic on the Bay Bridge and instead take a long, but occasionally brutal trek up to the city from the Valley on U.S. Highway 101.