Who Is Mark Stevens? Here’s What We Know About the VC Banned for Shoving Raptors Star Kyle Lowry 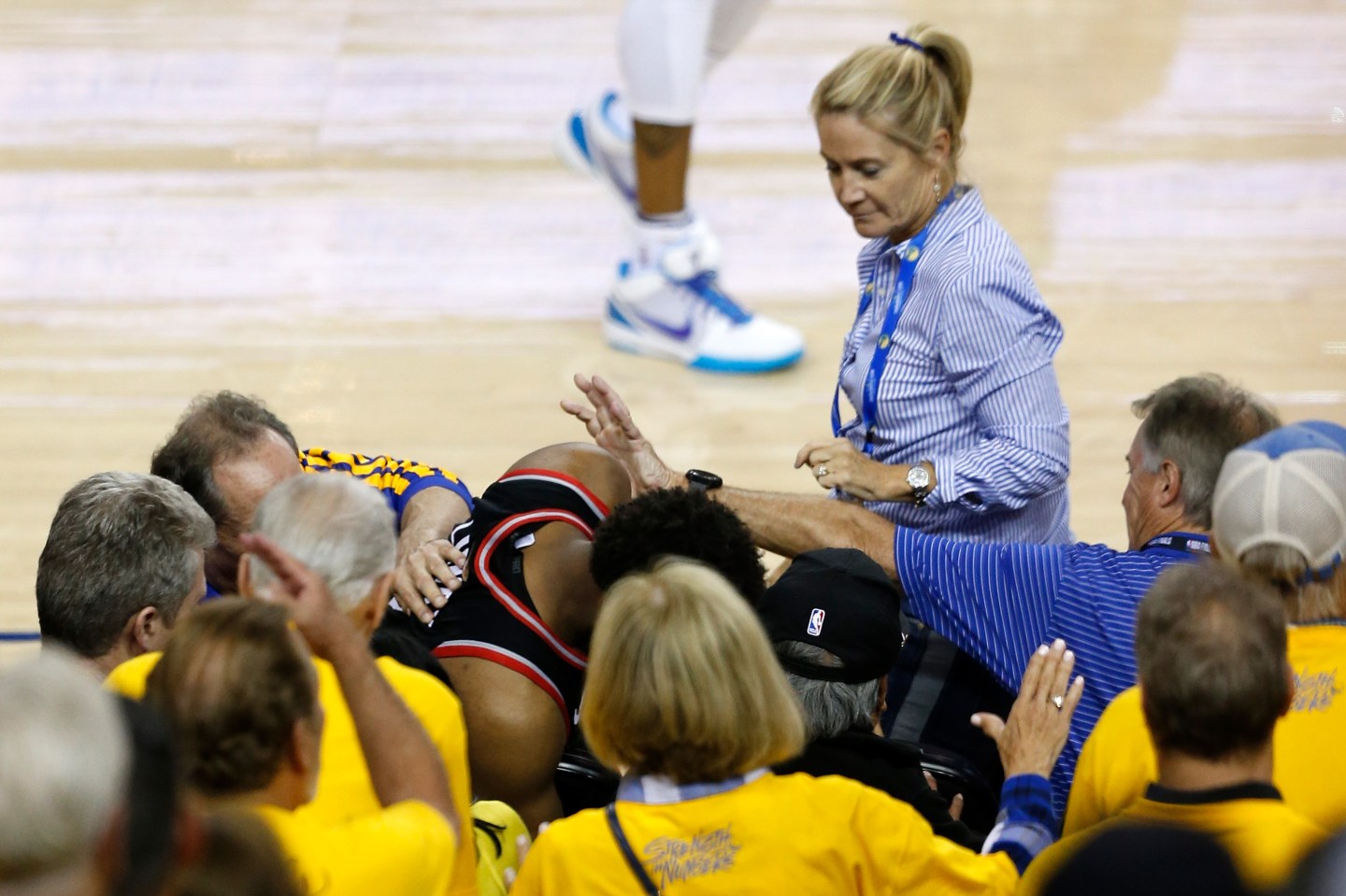 OAKLAND, CALIFORNIA - JUNE 05: Kyle Lowry #7 of the Toronto Raptors is pushed by Warriors minority investor Mark Stevens (blue shirt) after falling into the seats after a play against the Golden State Warriors in the second half during Game Three of the 2019 NBA Finals at ORACLE Arena on June 05, 2019 in Oakland, California. According to to the Warriors, Stevens will not be in attendance for the remainder of the NBA Finals as they look further into the incident. NOTE TO USER: User expressly acknowledges and agrees that, by downloading and or using this photograph, User is consenting to the terms and conditions of the Getty Images License Agreement. (Photo by Lachlan Cunningham/Getty Images)
Lachlan Cunningham—Getty Images

At first glance, he looked like an overzealous fan who shoved Toronto Raptors guard Kyle Lowry during an intense Game 3 of the NBA Finals Wednesday.

Turns out he’s not just any fan, but Golden State Warriors minority owner Mark Stevens, a Silicon Valley venture capitalist. As a result, the NBA and the Warriors said Thursday they have banned Stevens from NBA games effective immediately for one year and fined him $500,000 as a result of the incident with Lowry. The ban includes all of next season as well.

Stevens issued an apology for his behavior late Thursday afternoon saying he accepts the punishment handed down and takes “full responsibility” for his “lapse in judgment.”

“What I did was wrong and there’s no excuse for it. Mr. Lowry deserves better,” said Stevens, adding that he has attempted to reach out to Lowry and the Raptors to apologize. “I need to be better and look forward to making it right.”

NBA Commissioner Adam Silver told reporters Thursday “In this case, I think the one-year ban and the additional ban is appropriate. I certainly understand his sentiment. There’s not some rule book I can look to here what to precisely to do. This was a fair outcome and we did take into account how contrite Mr. Stevens was.”

Stevens is a managing partner of S-Cubed Capital which he founded after spending 23 years at renowned VC firm Sequoia Capital (he became a managing partner in 1993). While at Sequoia, Stevens played a pivotal role with numerous investments with companies including MP3.com, Pixelworks, and Nvidia. He serves on several boards including Nvidia and Second Spectrum, the latter which provides real-time data tracking of NBA games.

As a partner at Sequoia in the 90s, it was hard not to get immensely wealthy, as the firm placed early bets on companies ranging from Yahoo to Google. Stevens, whose worth is estimated to be more than $2 billion, is a longtime benefactor for the University of Southern California, where he attended college and has served on its Board of Trustees. Stevens also has been a co-chair of USC’s Investment Committee and a member of its Finance and Executive Committees.

He’s also the founder and chairman of an innovation center bearing his name. Stevens also serves on the Dean’s Advisory Board of the Harvard Business School. He joined the Warriors in 2013 when former part-owner Vivek Ranadivé bought a majority interest in the NBA’s Sacramento Kings and had to divest his share of the Warriors.

Wednesday’s incident occurred in the fourth quarter when Lowry dove into the front row at Oracle Arena while attempting to save the basketball from going out of bounds and Stevens, who was two seats away, shoved him. Lowry became irate, and began pointing towards Stevens and made a shoving motion when referees arrived courtside.

Stevens was ejected from his seat and was escorted out by security. Axios first reported that it was Stevens who pushed Lowry. Toronto Star sports columnist Bruce Arthur tweeted that Stevens apparently told Lowry several times to “Go F-Yourself.” Lowry confirmed what Stevens said during a news conference on Thursday.

The Raptors won Wednesday’s game 123-109 to take a 2-1 lead in the series as Lowry told reporters during his postgame press conference “there’s no place” for that type of behavior. “He had no reason to touch me. He had no reason to reach over two seats and then say some vulgar language to me,” Lowry said. There’s no place for people like that in our league, and hopefully, he never comes back to an NBA game.”

Before Stevens was handed a year-long ban, the Warriors said he would not attend any more games this season. The team publicly apologized to Lowry and was “extremely disappointed” with Stevens’ behavior that “did not reflect the high standards that we hope to exemplify as an organization…There is no place for such interaction between fans – or anyone – and players at an NBA game.”

NBA superstar LeBron James agrees, expressing his concerns on Instagram. The Los Angeles Lakers star and three-time NBA champion said the incident raises all kinds of issues and more swift action should be taken against Stevens.

“When you sit courtside you absolutely know what comes with being on the floor and if you don’t know it’s on the back on the ticket itself that states the guidelines. But he himself being a fan but more importantly, PART-OWNER of the Warriors knew exactly what he was doing which was so uncalled for,” James said. “He knew the rules more than just the average person sitting watching the game courtside so for that Something needs to be done ASAP!”

James also asked what would’ve happened if Lowry put his hands on Stevens in retaliation.

“You guys would be going CRAZY!! Calling for him to damn near be put in jail let alone being suspended for the rest of the Finals all because he was (protecting) himself,” James said.

Warriors star Stephen Curry agrees with James for how Lowry handled himself. The sharpshooter said Thursday that there’s “a lot of different reactions you could’ve had but (Lowry) handled it correctly.”

Curry’s teammate, guard Shaun Livingston, also condemned Stevens’ actions. “You have to face it, you have to address it right away. Again, credit to the league for doing that because boundaries have to be in place.”

Meanwhile, James, who had been keeping low this postseason after his streak of playing the last eight NBA Finals snapped this season, said he had to speak out.

“After saw what I saw last night, took time to let it manifest into my thinking, I couldn’t and wouldn’t be quiet on this!, said James adding the hashtag, #ProtectThePlayers#PrivilegeAintWelcomeHere.”