Is Molecular Whiskey the Futuristic Booze We’ve Been Waiting For? 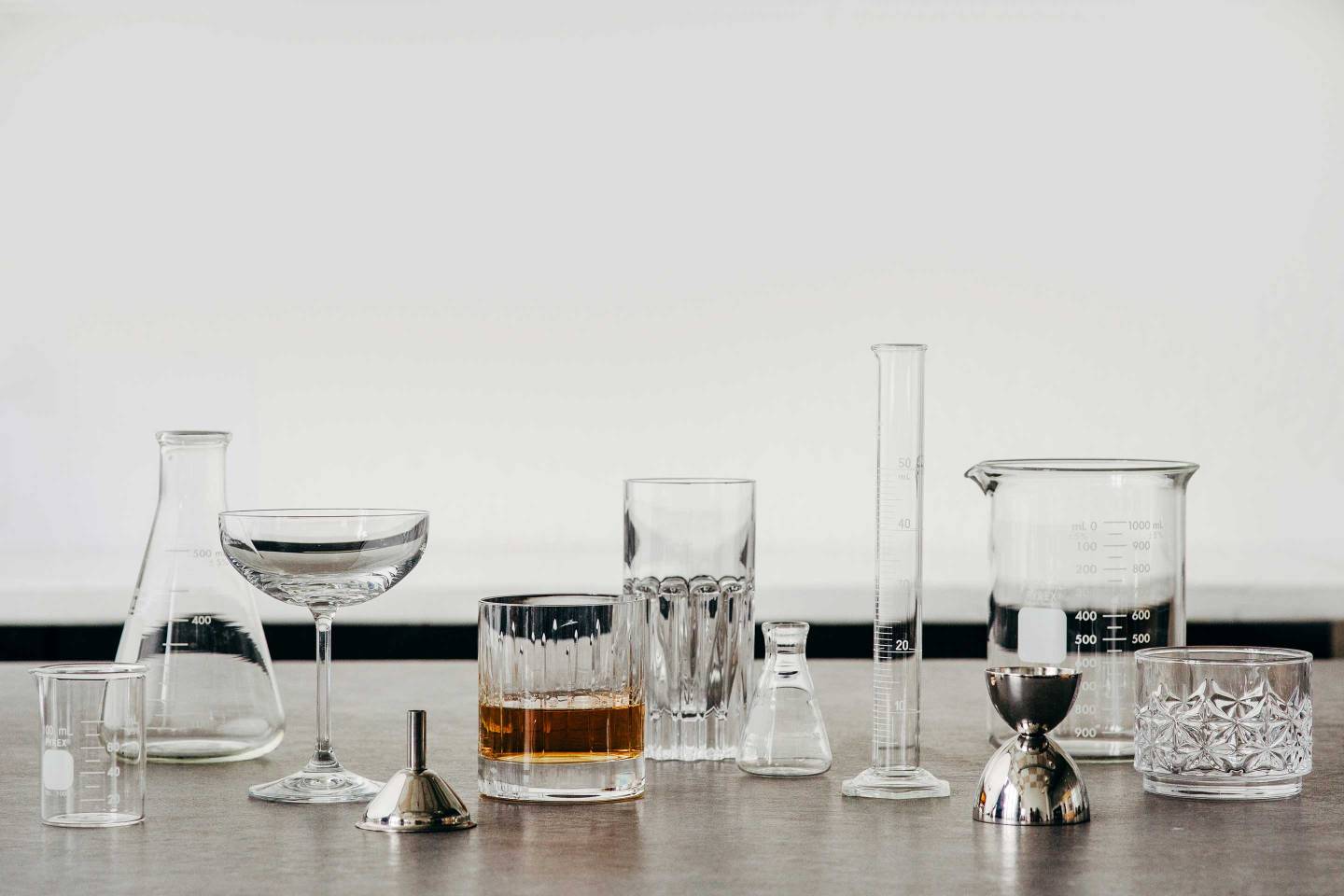 Tasting whiskey usually means enjoying flavors created from the interaction between spirit and barrel over an extended period of time. However, some companies are rethinking this traditional narrative.

Endless West, a San Francisco-based startup, recently launched a spirit made without the use of tried and true techniques, like barrel aging, in a process the company labels note-by-note production. Billed as the world’s first “molecular whiskey,” Glyph is not just a symbol of what happens when science, alcohol, and ambition meet, but what might attract future generations of drinkers to the products they purchase. But what does whiskey made in a lab actually involve?

At Endless West, note-by-note production is a three-stage process, beginning with mapping the molecules that give fine whiskeys their unique tasting profiles. To do this, their team studies the molecules found in currently available whiskey and spirits, analyzing what characteristics differentiate one whiskey from another.

Once specific molecules are identified, the next phase is locating and acquiring them in their purest forms, such as sugar from corn or esters from fruit. Everything is sourced naturally from plants, yeasts, and fruits as opposed to using artificial ingredients.

The final step involves using the chosen molecules along with a neutral grain spirit as a base to build the flavor profile of a whiskey.

“It’s important to emphasize that everything we make is our own original recipe. Using our note-by-note production process, we can make Glyph in under 24 hours or overnight,” says Endless West CEO and co-founder Alec Lee. The idea of being able to produce a whiskey in 24 hours that could match the flavor profile of a 24-year-old aged whiskey might seem outrageous, but it’s that question of “what if” that tends to drive most innovations.

“The reality is that most spirit and winemaking processes are pretty inefficient, especially when you consider the requirements for aging,” says Lee. “We’re simply making a statement that you can reimagine this traditional product in a new way and certain cost, time, and sustainability advantages happen to come with it.”

With an increasing demand for companies across industries to practice and preach sustainable production methods, a voice offering an alternative to sacred distilling traditions is intriguing enough to attract investors, industry professionals, and hopefully, consumers. “The single most important clarification here is how sustainability isn’t the central thesis of our appeal,” Lee says. “The central thesis is the ability to create an age old product that we know and love using a radically different medium that is inherently more efficient.”

From the scientific perspective, the premise that the molecules found in aged whiskey can be found throughout nature is valid enough for individuals to conduct experimentation. However, despite years of studying, making, and drinking whiskey, humans still have work to do when it comes to understanding whiskey’s DNA.

“The problem with saying ‘we analyzed whiskey down to the molecular level and reconstructed a new whiskey based on that information’ is that the complexity of whiskey is even to this day poorly understood,” says Dr. Pat Heist, co-founder and chief scientific officer for Wilderness Trail Distillery and Ferm Solutions, Inc. “There are likely chemicals in there that you can taste, but that are in levels so minute that they can’t be picked up by even the most sophisticated chemical analysis.”

As with any new product making its debut in the industry, opinions have varied. “I love science and innovation, so I’m not as opposed to the existence of products like this as most of my colleagues, but it’s hardly equal to whiskey. It’s a whiskey substitute,” says drinks writer Camper English of Alcademics.com. English first tasted Glyph as a judge in a blind tasting at the industry renowned San Francisco World Spirits Competition. That same competition awarded Glyph a silver medal in 2019, which the organization defines as “outstanding spirits that show refinement, finesse, and complexity,” in its Other Miscellaneous Spirits category.

“It’s not a world that really rewards the new kid on the block,” says Fred Minnick, author of Bourbon: The Rise, Fall, and Rebirth of an American Whiskey. Minnick notes that Lost Spirits in California was one company he knew of that’s been able to produce rapid-aging rums and whiskies using proprietary technology, but few have found long-term success when it comes to cheating Father Time.

Like any scientific experiment, there can always be unintended consequences. For some industry experts, there are good reasons as to why lab made whiskey doesn’t work for them. “Whiskey is an American heritage product that needs to be respected. Is building a liquid in a lab going to employ hundreds of people to make it and stimulate a local economy? Nope. Just because you can apply technology to something it doesn’t necessarily improve it,“ says Francine Cohen, founder of trade industry magazine and strategic brand consultancy Insidefandb.com. Though Cohen was not moved by her initial tasting of Glyph, she did indicate she would sample Glyph again if improvements were made from its original formula.

While Glyph, like traditionally produced whiskies, may not win over every palate in the industry, challenging the way consumers think about alcohol production demonstrates the widespread appeal making spirits has had from generation to generation. Though the age of a guest self-identifying as a molecular whiskey drinker may never come to fruition, the use of Glyph for cocktails might turn out to be the sturdiest bridge that connects this company to consumers.

Glyph already has an in-house mixologist creating original cocktail recipes, and the product is available in New York and California. “I love trying new spirits and cocktails so I would absolutely try it in a cocktail if I saw it on a bar menu. Why not?” English admits.

If the story of whiskey to this point has been a lesson on the virtues of patience and trusting the process created by professional distillers, the next chapter might focus on customization and what can happen when modern technology and outside-the-box experimentation mix. Though traditional practices will always be revered, the ability to apply new learnings in order to create perspective is something that’s always worth discussing and testing out—especially when drinks are involved.

—Why liquor makers are promoting cocktails over shots

—Move over Bourbon, premium rum wants its turn in the spotlight