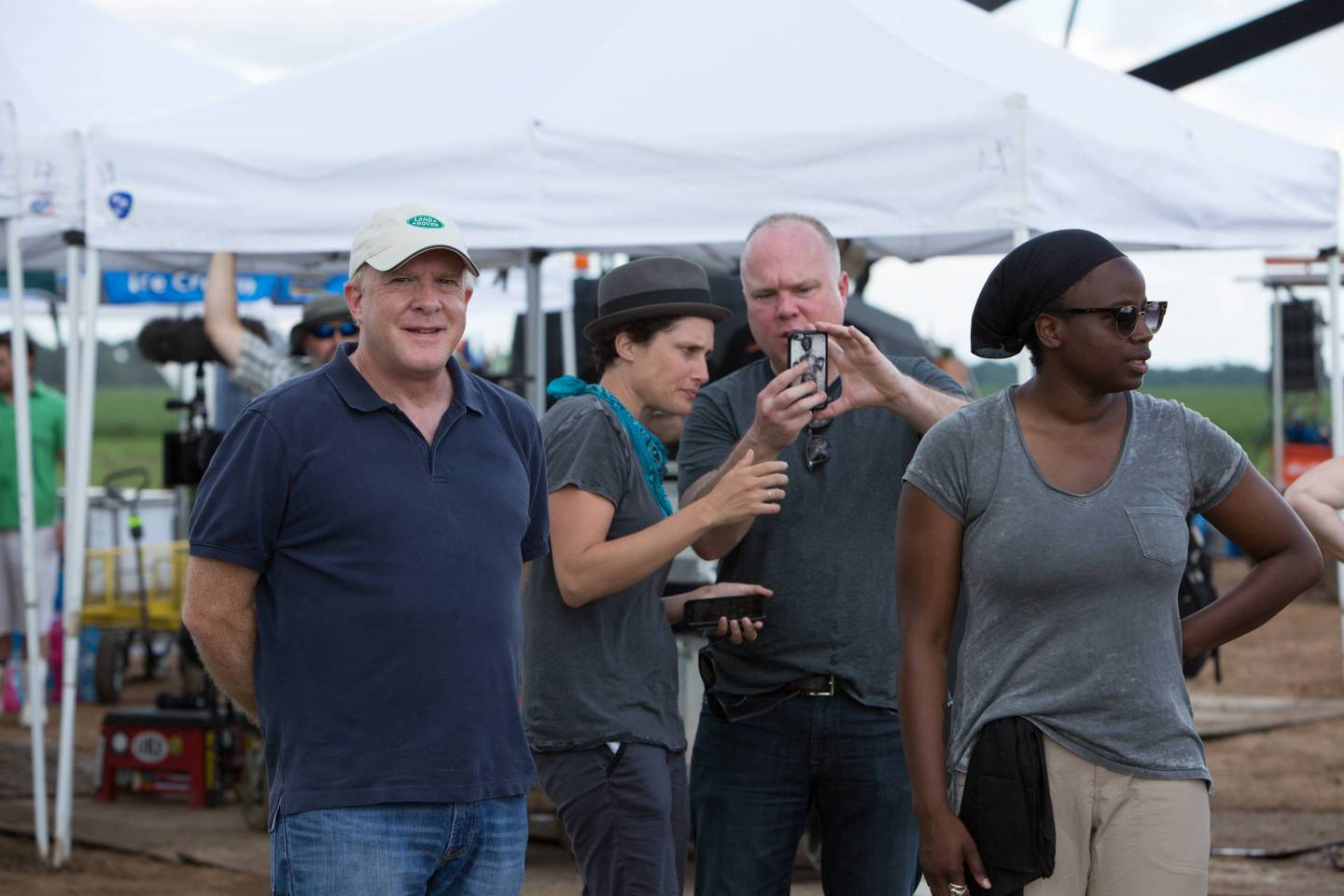 After producing and packaging more than 370 independent movies over the last three decades, from Sling Blade to Dallas Buyers Club, Cassian Elwes’ knack for bringing difficult stories to the screen has made him a unparalleled force in Hollywood.

He just never imagined he’d be in the middle of the drama.

Elwes says he had a life-affirming epiphany following a bizarre August 2012 incident on a JetBlue flight from New York to L.A. when he helped subdue an unruly passenger. (The young man, who said he was a Marine, was later arrested after punching Elwes in the ribs.) Tweeting during the ordeal, Elwes said: “I replay the whole thing in my mind again as the adrenaline wears off. What’s the message, what’s the point?” He says the event left him yearning for more meaningful connections in his work, and life.

Nearly seven years later, the 59-year-old Brit—who cut his teeth as a self-taught film financier on Rob Lowe’s breakout movie Oxford Blues in 1983—can claim both. In 2014, he launched a mentorship program called Horizon, which awards two emerging female filmmakers grants at Sundance each January. And he has publicly committed to hiring more women directors on his projects; among them is Dee Rees, who helmed Elwes’ four-time Oscar-nominee Netflix drama Mudbound. But he is also speaking out, perhaps to the dismay of some of his male peers, about how and why Hollywood has systemically failed women for so long.

Fortune sat down with Elwes inside his West Hollywood offices on the eve of his most recent release, J.T. Leroy, starring Laura Dern and Kristen Stewart (and on which 2017 Horizon grant-winner Andrea Villanueva worked as a director’s assistant). He discussed his journey from self-taught indie producer to feminist ally; why some men are angry about the current tide toward gender parity in the industry; and why his mission extends beyond pitching women directors as “good for business” in Hollywood.

Fortune: You’re one of few high-profile men—Ryan Murphy being another—who is fighting for gender equity, specifically for female directors. Why have so few others done the same?

Elwes: Sadly, I don’t have an answer. I find it shocking too. I don’t think it’s totally conscious; I think producers and executives simply don’t want to experiment with “new hires” because so much money is riding on each project. “I prefer to work with the people who’ve always delivered for me.” That’s the mentality.

But even if it’s subconscious bias, it still begets a cycle of conscious exclusion.

Yes. And now I have a lot older, white male friends who feel that there’s bias against them. It’s the pendulum swinging all the way to the other side.

You started your advocacy work for women not long after the airplane incident. Why and how did your vision take shape?

I think I saw in that event the impact one person can have on another. I talked to Franklin Leonard, who runs The Black List [the annual survey of Hollywood executives’ favorite unproduced screenplays, over 400 of which have been made since 2005] and told him I was thinking about doing work for Habitat for Humanity. He said, “No, you should use your mind to help young people in Hollywood.” And I said, “Okay. That’s better.”

How did you create a working model for mentoring women?

I decided first to mentor a young writer, encourage him or her to send scripts to The Black List, bring them Sundance, and teach them how independent movies get made. We got around 200 applicants and I selected a writer named Matthew Hickman. But while we were at Sundance in 2014, Women in Film [and the Sundance Institute] released the now infamous, 60-page Annenberg Report by Dr. Stacy Smith that outlined the plight of the female director. It was one of greatest horror scripts I’d ever read. The stats for women on studio films were horrific. I’d been working almost exclusively in indie film, so I never knew the problem was that bad.

One ugly reality exposed in the report was the struggle faced by women who break out at Sundance to make their second films. Was that news to you too?

Yes, unbelievable. But I thought: What was I going to do? I ruminated a lot after I got home on how women are treated. I thought about my daughters, who were starting to work in film. I thought about when young men interview for agency jobs, the older boss thinks, “He’d be great a wingman.” When a woman comes in he thinks, “She’d be a good assistant…” Around four months after that Sundance trip, the lightbulb went off: Problems for women start the minute they finish film school, so I’d focus on helping young female directors, straight out of college.

How concerned were you about undertaking this process?

Very. I thought, “I can’t be a man doing this on my own!” so I asked some of the best independent female producers I knew to be my partners: Christine Vachon (Boys Don’t Cry), who is the greatest; Lynette Howell Taylor (A Star is Born); and Michelle Satter at Sundance signed on as an adviser. I came up with the name Horizon, started an Indiegogo fundraising site, and also sold around $2,000 in personal movie memorabilia.

So the money went straight to funding Horizon?

What were your key selection criteria?

The women had to be in school, or within a year of graduating, submit a two-minute short film, and be 28 or younger. You can tell in a two-minute piece if someone has any idea where she should be putting the camera. (Laughs) We set a submission deadline of Oct. 31. About a week before that, we only had 20 applicants… Then we got deluged and received over 200 short films the final week. Then on some level it was scary because you’re thinking, ‘Wow, there are at least 250 women right now who really want a film career.’

Four hundred submissions later, around a dozen up-and-coming female directors have since been awarded grants via Horizon. But they aren’t the only women you’ve helped to prop up in the last few years. You personally lobbied hard for Dee Rees to be hired to direct your Depression-era feature [2017’s] Mudbound. Why?

Dee was hungry to put something new on-screen after debuting her first film, Pariah, in 2011. She had a very clear vision. She wanted the female characters to be equal to the male characters. She wanted to balance screen time for the white and black characters. She was so focused… She knew exactly what time of day she’d shoot each scene. She knew what every costume would look like. Dee was the bullseye of what Stacy Smith said in that report: A young, white male director comes to Sundance with a successful film and makes another movie within 18 months. For women of color, that period can last six years, during which many women simply drop out of the business because they can’t support themselves.

You helped to sell Mudbound to Netflix for over $12 million, and it went on to earn the company’s first haul of non-documentary Oscar kudos, including a history-making nomination for cinematographer Rachel Morrison. How do we make sure people like Dee keep getting hired?

Dee probably won’t stop working now—we’ve since made another film together—and that’s how it should be. If you do great work, you should continue to make more work. When I was an agent at William Morris, from 1993 to 2008, there were very few women and barely any female directors being repped. The system had been created to help white male directors: They were who the studios were hiring, so they were who the agencies were selling. But now when agencies present prospective directors to a studio, there are actually women on those lists! That was a key problem identified in Dr. Stacy Smith’s report: Agents weren’t suggesting female directors, and if they did, God forbid if they failed. But if a male director failed, he’d always get another movie. Agencies are finally seeing women directors as good business now. “Oh okay, so the more women who get hired, the more money we make?” (Laughs)

Are there moments from your own career you think back on now and cringe that maybe you did or said something that today might be considered inappropriate?

I certainly witnessed a lot of moments as a producer in casting sessions that now make me cringe. But I have to say that I was very lucky in that I met and fell madly in love with my ex-wife when I was quite young, like 26 or 27. Also I worked alone, [so] I wasn’t really part of a scene where I may have gotten into trouble. I was literally teaching myself how to raise funds and make a lot of low-budget movies.

You worked with very few women during those early years. Did it ever occur to you, “I should probably hire a woman for this movie?”

No. I don’t think I had time to wonder about it. Being a young producer in this town without a lot of relationships was difficult. All the studio executives and agents were buddy-buddy with each other. I would hear stories about 40 guys going on a white-water rafting trip and think, “I wish I had gone on that!”

So you felt excluded, essentially how women have always felt in business.

I saw you speak on a Sundance panel this year and you said men are “really scared” by the current movement in Hollywood. Have you experienced pushback from your male peers from the advocacy work you’re doing?

Not directly. I think some people look at what I’ve done and say, “Oh, that’s a smart business move.” But it was much deeper than just business. My experience with that young man on the plane caused a real shift inside me. After years of working in an agency where five alpha males controlled 80 other alpha males, I started to feel a moral obligation to say, “It doesn’t all have to be this selfish.”

What would you say to men who haven’t yet committed to helping gender equity become a reality?

Our business is finally shifting in positive ways. Some God-awful things happened along the way that helped to push the agenda forward, but the genie is out of the bottle and it ain’t going back in. Men in positions of power need to lean in and realize that history is always on the side of equality and they should be on the right side of it, too.

—Get used to Disney’s nostalgia-based remakes

—The race for the 2020 Academy Awards has already begun

—Why was the ‘Game of Thrones’ finale blocked in China?

—What we learned from the 2019-2020 TV upfront presentations