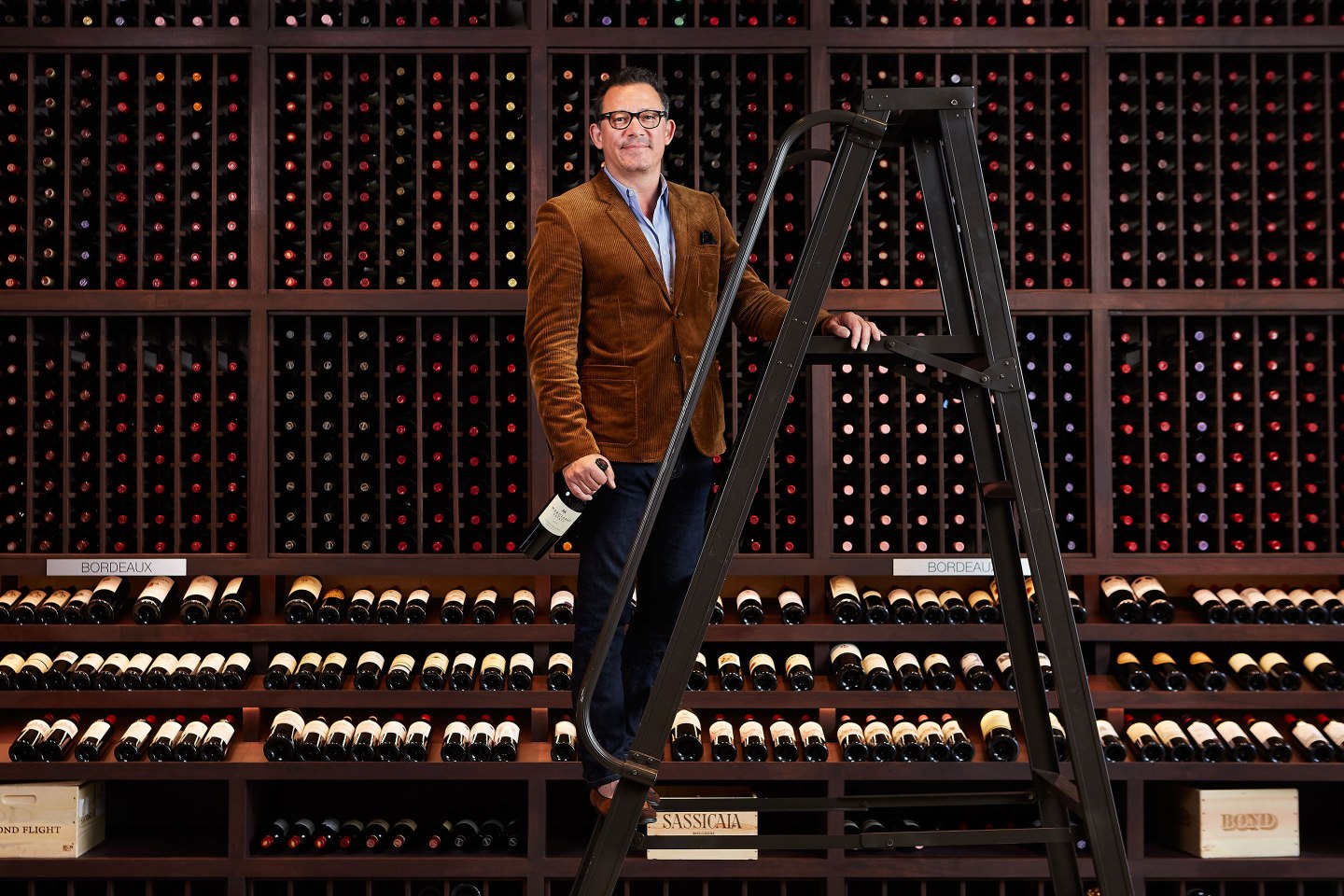 Christian Navarro can barely stride 10 paces down the big, breezy corridors of the Four Seasons Resort in Maui without stopping to clap a shoulder or kiss a cheek. Though this Hawaiian luxury hub plays host to many traditional celebrities—the Oscar-winning actor Mahershala Ali hangs out by the lobby, awaiting a car—on this weekend, the first in March, 52-year-old Navarro, the president of Los Angeles’ preeminent wine seller, Wally’s Wine & Spirits, is top dog. He’s organized the resort’s first annual wine and food classic, convening high-end producers from France, Italy, California, and 200 wine connoisseurs for four days that might best be described as oenophiles gone wild.

By the adults-only pool, there’s a “glass­ology” class taught by a Riedel representative who decries the ubiquitous balloon-shaped glass as “the enemy of all red wine.” (He instructs note-taking attendees to pour a New Zealand Sauvignon Blanc from a narrow glass into a paper cup, asks his co-instructor what it smells like in that lesser vessel, and nods gravely at her response: “tragedy.”) On a lawn overlooking the ocean, the “Discovery of Pinot Noir” seminar devolves into a debate about the merits of making Pinot in California vs. France. (“They can have hail in July,” says a Napa loyalist. “We have an embarrassment of sunshine.”) On the balcony of a penthouse suite, it’s time to saber a magnum of vintage Billecart-Salmon Champagne, but the sharpest tool in the room is a butter knife. No matter! An assistant rushes down to the lawn to shoo passersby away from potential flying cork and glass, but a suave Frenchman does the job quickly, cleanly, and seemingly effortlessly as Navarro whoops and shoots a video on his phone. As the host, isn’t he a bit anxious?

“Look, we’re in Hawaii,” he says. I think I see his eyes roll behind his shades; a diamond-encrusted cross glints below his neck. “For me, it’s easy. People showed up; these guys are professionals. I just have to go around, shake hands, and remember everybody’s name. If I can do that, it’s all good.”

Navarro’s swagger and carefree attitude belie his unlikely ascent to the top of the high-end wine world. His mother brought him to the U.S. when he was a toddler, fleeing violence in their native Mexico City. They settled in Palm Springs, but Navarro “never went to school,” he says, and at 18 he hitchhiked to Los Angeles with dreams of making it as an artist and friends who let him crash with them, to a point. “I was homeless,” he says. “I lived on the street and needed to get a job.” He applied for one at a frozen yogurt chain called Penguin’s and another at Wally’s, a wine shop in the Westwood neighborhood of L.A. “Penguin’s didn’t hire me because I didn’t have a high school diploma,” he says, “but the wine store needed a floor sweeper.”

He struck up a friendship with the founder of Wally’s, Steve Wallace, who got curious about his floor sweeper’s palate after he wafted a Pinot Noir under Navarro’s nose and Navarro correctly identified its aroma as strawberry. “I sat down and started tasting wine, and I found, even though I couldn’t read very well, I can’t do math very well, I’m probably a little dyslexic, that I could remember everything I smelled and tasted, and then was able to articulate it back,” he says. During the 1980s he was Wallace’s right-hand man, nurturing relationships with famous clients who came in to build their cellars, like Tom Cruise, Jack Nicholson, financier Michael Milken, and Michael Ovitz, cofounder of Creative Artists Agency. “Those two guys [Milken and Ovitz] took me under their wing and introduced me to everybody,” Navarro recalls. “They kept saying I’m the best. Even if I’m not the best, if they say I’m the best, now I’m the best.”

Because of his deep virtual Rolodex of wine buyers and sellers, if Navarro gets, say, an allocation of a particularly coveted Bordeaux, he very likely knows collectors who have been waiting to pounce on it. These days he texts with clients like Drake, who rap-bragged about booking a private room at Wally’s in his 2018 song “Diplomatic Immunity”: “Booked a private room at Wally’s/Waiter twistin’ the cork.” Drake was referring to the Beverly Hills location of Wally’s, a hybrid bar, restaurant, and wine shop; a similar outpost opened in Santa Monica last year.

In 2013, when Wallace retired, Navarro bought Wally’s with Paul and Maurice Marciano, the brothers behind the Guess clothing line who have long trusted him to steer them in the right direction when it comes to wine. “He has a passion for wine, a knowledge for wine, that I haven’t seen in many people,” says Maurice. “He also has great, great contacts. He develops relationships. There is no price for that. Either you have it or you don’t.”

In 2016, the Maui Four Seasons entrusted Navarro with the task of elevating its wine lists. (Guests in “elite suites” can choose from a rarefied menu that includes a 2012 Château Pétrus and a 2009 Cristal.) “He also said, ‘It can’t be me picking the wines, and you leave it at that,’ ” says Mark Simon, the resort’s director of marketing. “You need to invest in your people.”

At Navarro’s suggestion, the resort established a program that pays for sommelier training for any employee who’s interested. It now has 20 people in the sommelier program and one master sommelier. “Three years ago, we only had two somms on property, total,” Simon notes.

Somms greet Navarro with bear hugs. Throughout the weekend, well-wishers buzz around him. But he continues to insist he’s nothing special. When asked if there was a moment when he realized that he’s pretty good at this wine thing, he says, “I still don’t think that. Because of my youth and my past, I’ve never really looked in the rearview mirror. If I stop to think about it, it kind of scares me.” Plus, he says, gesturing at the bubbling Billecart-Salmon, there are more pressing matters at hand. “You can come here and have a world-class gastronomic experience. In the Pacific, there’s nothing like this.”

Navarro’s Guide to Building a Cellar

Q: Say I’m a casual wine drinker, and I want to invest in a cellar. Where should I start?
A: Buy wines that have ageability: good quality Cabernet Sauvignon, Pinot Noir. Something with stamina. You don’t want to take a Chenin Blanc from Santa Barbara, put it in a wine cellar, and three years later think it’s going to be better. That generally doesn’t happen.

Are there particular vintages that are a good value right now?
Get in on inexpensive Bordeaux and really nice California Cabs. I’d recommend the 2015 Château Giscours (about $65), the 2014 Jonata Todos ($50), and 2014 Daou Reserve Cabernet Sauvignon ($60).

Is there a wine region that hasn’t quite peaked yet, where it would be good to start buying from?
The central coast of California is probably the most under-the-radar area in the world right now, from Santa Barbara to San Luis Obispo and Paso Robles. Those wines have very good quality, very high value, and they’re waiting to be discovered.

Do you recommend any apps for managing a wine collection?
CellarTracker is great. You can see what your peers are thinking about a product and get a communal rating, instead of some dusty old guy south of London determining when you open something.

Is it true that if you’re planning to cellar a particular wine, you should buy multiple bottles of it?
Absolutely. Here’s what happens: You buy wine, you put it in your cellar, you take it out, you discover, “This is amazing. It just needs two more years.” Two years ­later, you have another bottle set aside. It’s the journey you take with the wines, that’s the fun.

Where should I get the wine that’s going in my cellar? A vineyard, an auction, a website, my local wine store?
First, discover what you like, and then you should probably have a relationship with all of the above. It’s crucial to develop a relationship with a merchant to find out what the best varietals are for you, how long you want to age them, and what you’re looking for as far as taste profile. A good merchant will have a lot of selection. Wally’s has 8,000 unique bottles. I guarantee we have 500 items in your price range.

A version of this article appears in the June 2019 issue of Fortune with the headline “Hollywood’s Wine Seller.”

—A tequila sommelier on how to drink Mexico’s favorite spirit

—A guide to the food and wine capital of South Africa

—Low ABV, fruit-flavored beers are having a moment