A Tequila Sommelier on How to Drink Mexico’s Favorite Spirit 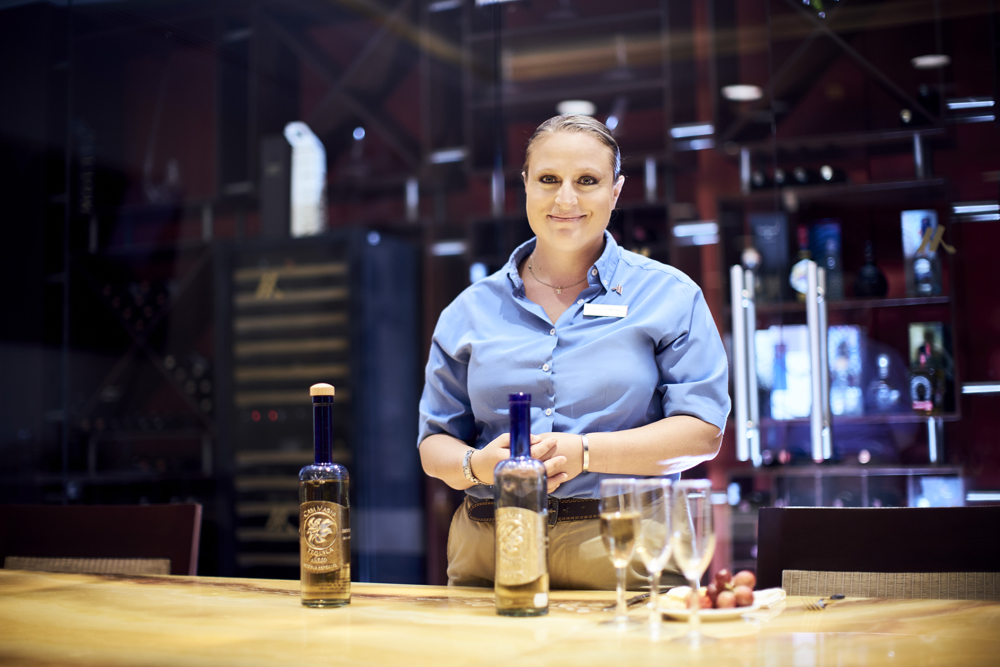 Put the salt and lime away—there’s no room for them at Audrey Formisano’s tasting table.

The tequilera, or tequila sommelier, wants everyone who visits her for a tequila tasting at Marriott Puerto Vallarta Resort & Spa to forget that the spirit may have been an accomplice to soul-crushing hangovers during their college years. Tequila, she insists, has graduated from party shot to craft spirit, and it can be every bit as nuanced—and enjoyable—as a glass of wine or fine cognac. You just have to change your approach, and Formisano is here to help.

Like her accent, Formisano is layered with Spanish and French influences. She studied hospitality and earned her sommelier accreditation in her home of Marseilles, France, a region known for its rosé production. In the early aughts, a drive to learn Spanish brought her to Puerto Vallarta, Mexico, and it’s here—just 90 miles from the town of Tequila itself, where the spirit originated—that she discovered her passion for the country’s drink of choice.

It’s something the certified tequilera shares with patrons through tequila tastings that feature the hotel’s proprietary brand, CasaMagna, which she helped develop from plant to barrel to bottle. She points to the blue agave in the cactus gardens and explains that it’s from these plants, which grow for seven years before being shaved down to their piña cores, that tequila is made, and that it can only be made in and around the state of Jalisco.

Fortunately, she says, you can enjoy it anywhere. Here, we’ve asked Formasiano to share tips for sipping, savoring, and inevitably selecting a bottle of tequila to enjoy even after the vacation has ended.

Formisano: When we take the tequila, we will use our senses, right? So we will see, for instance, the color, like say we have the first one: the blanco, the white tequila. We will look at the color, then we will start to look around the glass to see if it has the legs. Then we will smell it, and I’ll ask what you: Is it fresh, floral? What kind of perfume do you feel? And then, of course, have a little sip to see how it feels in your mouth. And then I’ll say, oh, maybe we should have a little shrimp, because the white tequila goes really well with fish. I did a bachelorette party with only dessert.

Are all of your tequila tastings paired with food?

Yes, it’s about balancing the taste in your mouth. The white tequila will open your appetite. It’s good with light flavors like seafood, lime, apple. It’s good for appetizers. Reposado is typically paired with heavier entrees or strongly flavored dishes like chicken or a more potent fruit. Añejo is usually served with dessert—anything chocolate—like mousse. When you have a drink like that, it’s for sipping. Some tequila can be compared to a fine cognac that I have back home, and this is what tequila is all about for me.

What’s the difference between the tequilas?

There are five types. I always tell my guests that the blanco is like the passport of tequila. Mexicans consider it the purest, as it hasn’t been in an oak barrel at all. Blanco, or “white” in Spanish, smells like agave, has a floral taste and a fresh finish.

The joven, which means “young,” has a fresh taste as well. It’s like a mix between blanco and reposado, though it’s less popular or not regularly carried.

The reposado, “rested,” is when you’ll start to smell the hints of oak from the barrel, which can come from France, the States, or Canada. The barrels can be used up to seven times, and the reposado can be in the barrel for up to a year. It tastes like chocolate or vanilla, depending on your own palate, and has a smooth, buttery finish.

The añejo, “aged,” will have a strong oak smell, and can have a chocolate, caramel, or even toasted almond taste, with a creamy finish. It stays in the barrel for up to three years.

The añejo extra, “extra aged,” ultimately depends on the brand of tequila. It can be extra oaky, toasted, or smoked.

What should people look for when selecting a tequila if they can’t taste it first? Does the bottle tell us anything?

The alcohol content should be between 38% and 42%. For a pure blue agave tequila, no sugar can be added during production and no other spirit can be blended in after distillation. This bottle will say 100% agave. If it does not, it’s what’s called a mixto: 51% agave with 49% sugar, like sugar cane. That doesn’t mean it’s a bad tequila, but the tequilas made with 100% blue agave are best for sipping vs. mixing into cocktails. I would use the blanco or maybe reposado tequila in cocktails.

On the back of the bottle, the CRT (Consejo Regulador del Tequila, or tequila regulating counsel) stamp means it’s certified. That’s the denomination of origin. People think it’s tequila because we’re in Mexico, but no! It’s because we are in the state of Jalisco, which is so important to the country.

Fill in the blank: If you like a vodka soda…

Try a Paloma made with white tequila, grapefruit, soda, and a salt rim.

Try La Bandera, which looks like the colors of Mexico, with lime, white tequila, and sangrita.

Opt to sip an añejo.

What’s the greatest misconception people have about tequila?

In Europe or in the States, tequila is about the college years—that’s what we think of. Unfortunately when you’re in Vallarta, you have the shirts that say, “One shot, two shot, three shot, floor,” so people think that you’re going to get drunk with tequila or have a headache. It’s not like that at all. Tequila is not about the hangover; it’s about the experience.