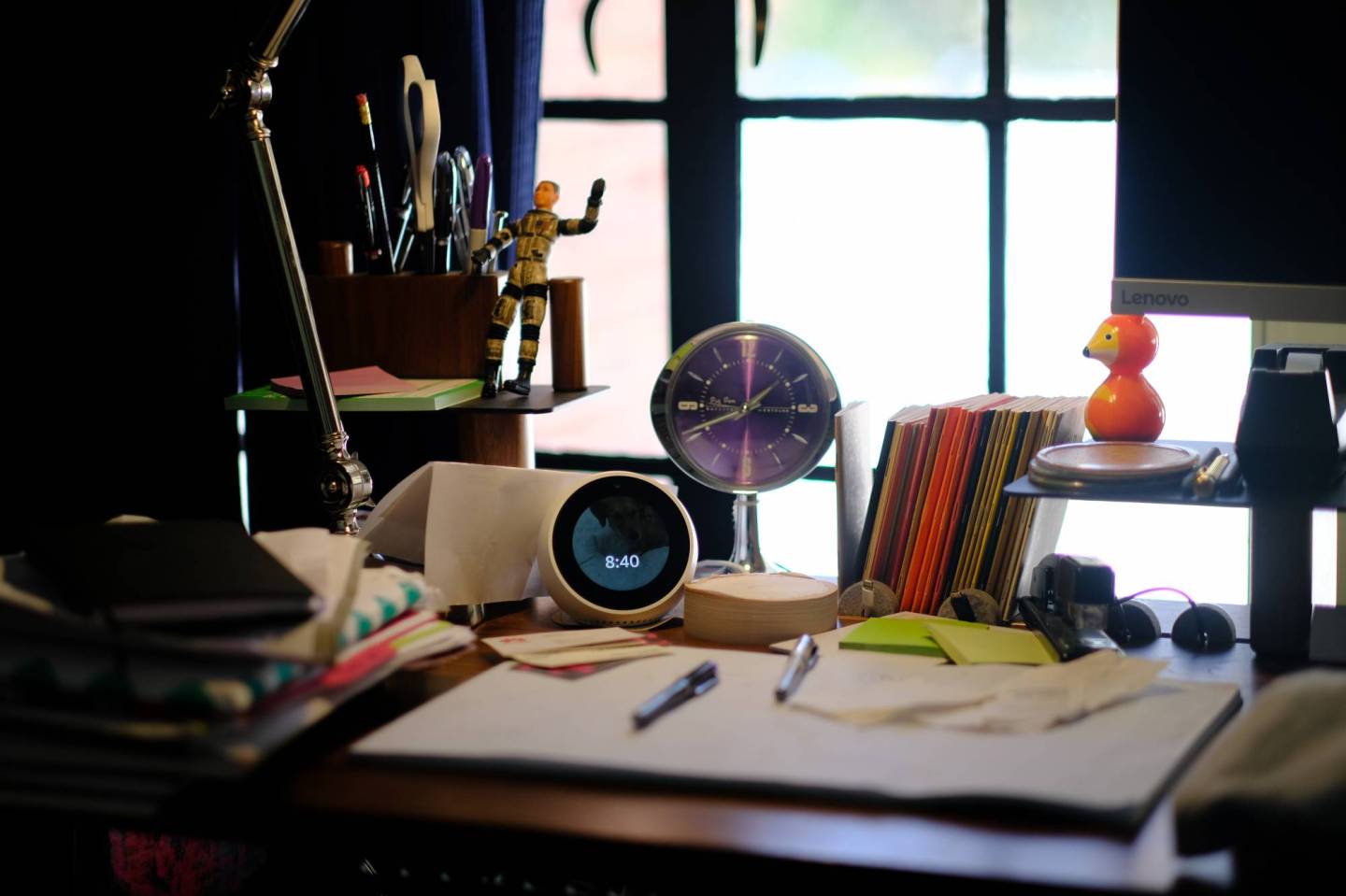 Saturday Night Live remains one of the few shows that can entice my entire family, including the three teens¹ to put their phones down², sprawl out on the couch, and enjoy together. Mind you, it’s usually on Sunday morning on the Tivo. This past week’s episode with guest host (and former SNL writer) John Mulaney was a classic, and the best bit was definitely the Willy Wonka send-up, Bodega Bathroom. But it was my family that got the last laugh on me when the skit turned to a spoof of the song “Seasons of Love” from Rent. “There’s 525,600 items, 525,000 unrelated things, 525,000 flavors of ramen,” the cast sang. “Dad, that’s like your office,” someone piped up.

To be fair, I’ve been working on going paperless for some decades. It’s just not working out very well. And have you noticed that digital life can be just as overstuffed, sprawling and disorganized as real life? There are hundreds of files in my Dropbox account, even more in my Google Drive if you include photos, plus whatever stuff got into my iCloud Drive folder. Adobe also has some of my stuff in the cloud, as do a bunch of note apps. I also acquired a Microsoft OneDrive account somewhere along way. Look a little closer and there are different contacts listed in Google, on LinkedIn, even in my Apple Contacts app on my computer and on my iPhone (come on, Apple).

So let’s just say I was intrigued by Steven Melendez’s brilliant piece for Gizmodo this week about “digital hoarders.” Did you know there’s even a Reddit forum for these people? It’s /r/datahoarder. Forget my excess of New York Times articles saved to Evernote—there are people spending $3,000 on hard drives to save old BBC sound effect samples or digital copies of illuminated manuscripts. But digital hoarding—or really, collecting—is unlike its real world counterpart and can be a healthy and positive behavior, so says psychology professor Gregory Chasson of the Illinois Institute of Technology. “The collections tend to give pride and positive feelings, whereas hoarding tends to be associated with stress and disorganization,” he tells Melendez. Now I just need the professor to speak with my kids.

Footnotes:
¹Our oldest turned 20 recently, so I really shouldn’t be calling her a “teen” anymore.
²Of course, the phones come right back up as soon something really funny happens so they can Insta about it.

Global coverage. The race is on to connect Africa more directly to the cloud, and it looks like Microsoft is in the lead. The company on Wednesday opened two new cloud computing data center “regions” in Cape Town and Johannesburg, South Africa. Amazon says it's opening an AWS data center in Cape Town in the first half of 2020. Google, which doesn’t currently operate an African data center, opened an A.I. research center in Ghana last year.

The one you actually want. The maker of the scratch resistant "Gorilla Glass" used on smartphones, Corning, confirmed on Tuesday that it is working on a bendable glass that could be used in future foldable smartphones. “We are working with our customers on this challenge and are currently sampling our development glass with them," a spokesperson said. Among Corning's top customers? Apple. And speaking of future Apple product signals, the company acquired the patent portfolio of failed home security startup Lighthouse AI.

Get in line. Embattled food delivery startup Munchery filed for bankruptcy. The company owes $28.5 million in secured debt to lenders and $6 million in unsecured debt (half to thousands of former customers with unfulfilled gift cards), according to a Chapter 11 filing. At the other end of the food delivery (and ride sharing) startup spectrum, Grab raised $1.5 billion of venture capital from the SoftBank Vision Fund in a deal valuing the company at $14 billion.

A unicorn gets its horn. Away from the eats, mobile banking startup Chime raised $200 million from investors led by DST Global at a valuation of $1.5 billion.

Nailing jello to the wall. France unveiled its proposal to tax tech giants on Wednesday. The 3% revenue tax—known as the “GAFA” tax after the initials for Google, Apple, Facebook, and Amazon—would apply to tech companies that sell digital products from third parties, traffic in user data or sell digital advertising, and that pull in global annual revenues above €750 million ($848 million) and French revenues above €25 million ($28 million).

Trying to keep up with the fast-changing business of podcasting, Nicholas Quah's weekly Hotpod newsletter is an essential read. This week, Quah explored the much-hyped startup Luminary, backed with $100 million of venture capital and armed with a plan to offer a premium subscription to a select group of podcasts. The entire issue is worthwhile, but I particularly liked Quah's creative disdain for the overused metaphor that Luminary wants to be the "Netflix of podcasting."

Why Bad Design Is Important By T.F. Chan

T-Mobile Has Spent $195K at Trump's D.C. Hotel Since Announcing Its Merger With Sprint By Natasha Bach

Do You Have a 'Work Wife?' These Founders Think You Should By Erica Cerulo and Claire Mazur

Did I mention my kids are hooked on Instagram? The phenomenon of impressing your friends with amazing photos and clever captions has become the bane of some Parisians' existence, it seems. Residents of a street near the Bastille called Rue Crémieux are freaking out about the hoards of Instagrammers stopping by to photograph their picturesque pink houses and overflowing window boxes. They want the city to bar visitors from walking through on nights and weekends. Bonne chance !