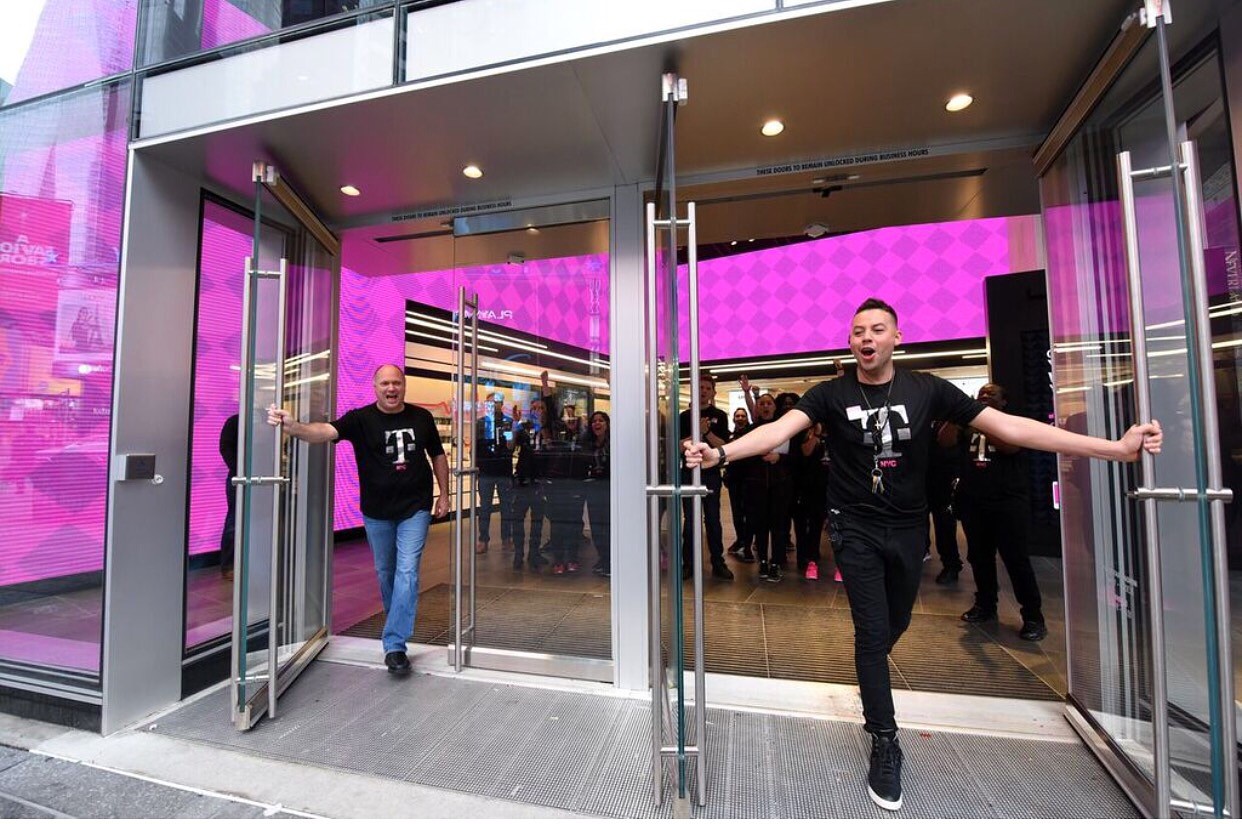 Start spreading the news: Ivan Beltran is making it in New York, thanks to some help from T-Mobile.

Beltran is the general manager of T-Mobile’s “Signature Store” in Times Square, one of the most prominent retail locations for the mobile carrier nationwide.

Beltran was born in Mexico City, grew up outside of Wichita, Kansas, and always dreamed of living in New York City. Some 16 years ago, he was working at a T-Mobile call center in Wichita when he decided to make the move to the Big Apple. T-Mobile eased the transition, giving him a job at a retail store. Since then, he’s worked his way up the ladder and landed the Signature Store general manager position nearly three years ago. Beltran didn’t have the director-level experience company recruiters were looking for. “But,” he recalls, “I had that passion and love for our brand,” he says.

The maverick telecom firm gave him a chance—and the decision has been a hit. The company is known for blending mobile phone commerce with corporate cool, and today, Beltran and his team of 80 staffers regularly host public events in the 4,000-square-foot space, such as recent LGTBQ Pride gatherings.

Beltran says he’s grateful T-Mobile made the call to put him at the center of the action in the largest city in the U.S.

“What it means to me is I work for a company that truly values their employees,” Beltran says. “A company willing to take risks.”

Beltran isn’t alone in appreciating T-Mobile as an employer. The company ranks as one of the 2018 Best Workplaces in New York. My organization, research and people analytics firm Great Place to Work, just announced the list in partnership with FORTUNE. The list recognizes the top workplaces in New York state as well as the New York City metropolitan area, and is based on employee responses to Great Place to Work’s Trust Index employee engagement survey.

Key to being a top workplace in New York is having leaders who are willing to listen to a local workforce that is known for being outspoken.

“People in New York are not shy,” says Jon Freier, T-Mobile’s executive vice president of retail channels. “If there’s a problem, they’re going to tell you.”

Freier cites a rolling series of employee meetings with company executives in New York and throughout the country. At these events, Freier and other leaders take in feedback and aim to respond with policy changes on the spot or a decision within 24 hours. “That energizes the team,” Freier says. “It shows, ‘I’m not coming to a stiff corporation where I’m talking to the suits.’”

This emphasis on an enthusiastic workforce is part of T-Mobile’s strategy to beat rivals on customer service. Freier likes to say there are only two kinds of employees at T-Mobile: “those who serve customers and those who serve people who serve customers.” During a massive nation-wide hiring spree last year, the company explicitly sought passionate and energetic job candidates. Last year, T-Mobile opened 1,500 stores, brought on 10,000 new employees and saw revenue climb 8.3 percent to $40.6 billion.

The service-focused strategy seems to be working. T-Mobile ranked second only to Verizon in customer service according to a recent report by research firm tom’s Tom’s Guide, and was ranked first in customer satisfaction among full-service wireless carriers by J.D. Power this year.

A big factor in T-Mobile’s success, Freier says, is the company’s embrace of employee individuality. “We tell people, ‘we want you to be you,’” he says. “We think people do their best work when they can be themselves.”

The be-yourself mantra starts at the top. T-Mobile’s CEO John Legere has shattered the mold of the buttoned-down CEO, brashly attacking competitors, making quarterly earnings meetings with his leadership team totally transparent to all employees and hosting a weekly cooking show.

Framing T-Mobile as the hip “un-carrier” also has involved taking a bold stance on diversity themes. The company’s Superbowl ad this year turned heads with a montage of babies of different races and a voice-over that positioned T-Mobile as a defender of inclusion: “Some people may see your differences and be threatened by them. But you are unstoppable.”

Ivan Beltran sees himself as proof the company is walking this talk. He felt supported by T-Mobile when he moved to New York City, and in the way his supervisors encouraged his promotions over the years from associate manager to store manager to district manager. The kicker was when the company bet on him with the Signature store leadership position. That move more than doubled the number of people he managed besides put him in an important role as leader of one of just six T-Mobile Signature Stores nationwide.

Beltran’s store is part retail shop, part showroom. It features products, of course, but also 4,000 square feet of flashing screens and interactive displays such as a selfie station that allows visitors to broadcast themselves to Times Square. The store also doubles as an events space, for occasions like “Military Mondays” when T-Mobile brings in military veterans and touts the company’s service plans tailored to vets and their families.

It’s fitting for Beltran to be at the center of all this glitz and glamour. He studied acting for three years and has been part of New York City’s independent film scene. He may return to acting eventually.

For now, New York show biz for him is within the theater of his store. He says his proudest moment was when he and his team opened the store’s doors in January 2016.

The event wasn’t that different from a Broadway opening night. “That was so special, because I saw the amount of work that went into it,” Beltran recalls. “It’s something that stays in my heart forever.”