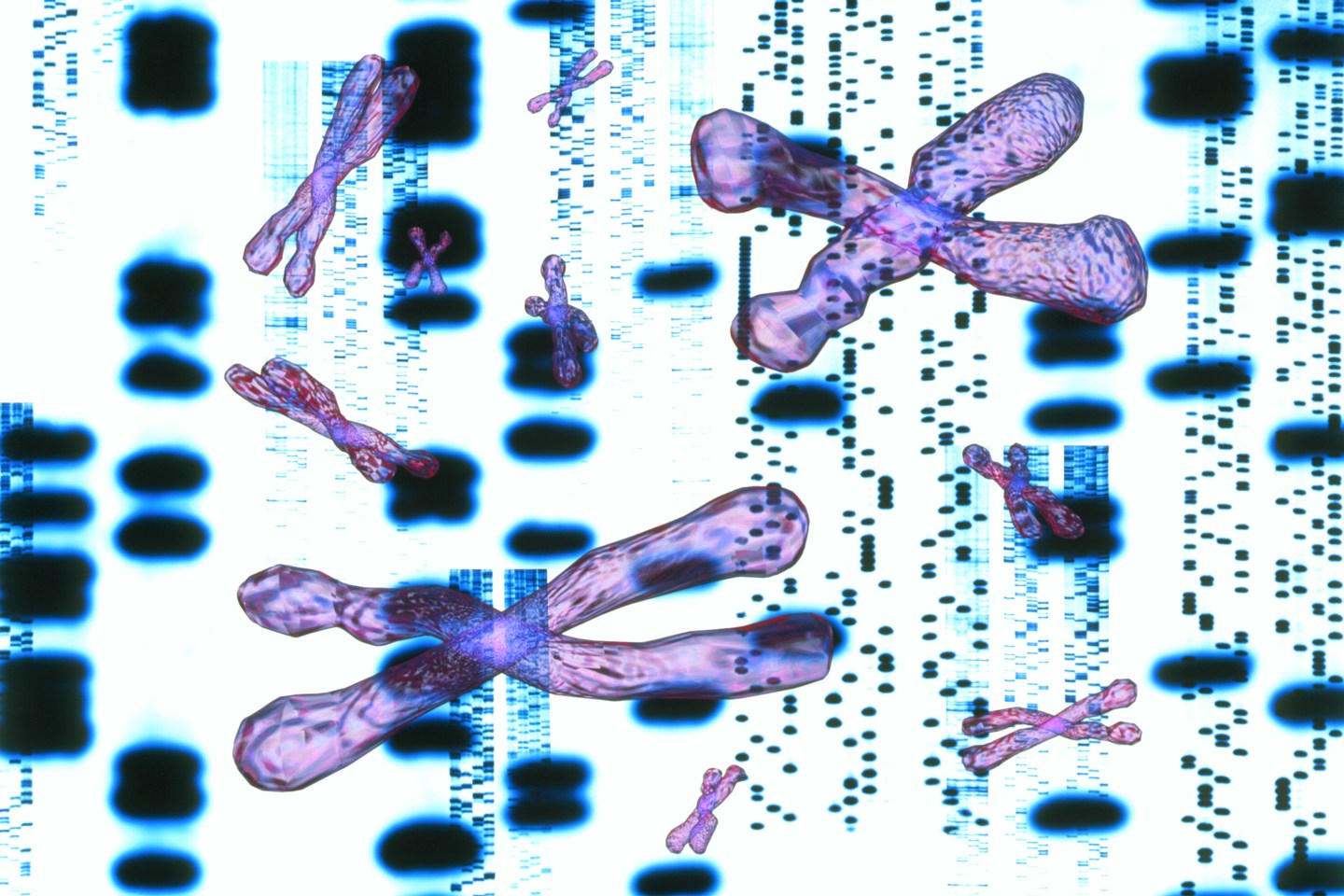 DNA sequences & chromosomes. Computer artwork of an autoradiogram of DNA (deoxyribonucleic acid) sequences. A close up view of a sequence is superimposed in the foreground. Also in the foreground are chromosomes (mauve). In the cells of an organism, DNA is found in chromosomes.` Here the DNA sequences are four rows of irregularly spaced black bands. A DNA sample can be taken from body fluids such as blood, and body tissues. The DNA is then fragmented with enzymes to form the banding pattern. The bands represent the positioning of the base pairs on the DNA molecule. This makes up the genetic code in the form of genes which is unique to every person.
Alfred Pasieka—Getty Images/Science Photo Library

Intelligence and a sense of well-being may result from just over 1,000 of our genes—as little as 4% of our genome—while depression, anxiety, and schizophrenia could be caused by even fewer, according to two studies published in Nature Genetics on Monday.

People with genetic advantages towards intelligence may live longer, too, but also be more likely to have symptoms associated with autism.

The impact of this research could be better diagnoses of autism and ADHD, and of people at risk for depression, Alzheimer’s, and schizophrenia. Beyond diagnosis, a better understand of these genes could allow direct treatment for—or the reduction of risk of developing—diseases or psychiatric traits through gene therapy, a method of directly modifying genes that is proving itself in clinical testing for particular conditions.

Because the research reveals underlying mechanisms that contribute to intelligence, it could help fuel controversies about genetically based differences in intelligence, as well as whether to allow those who could afford it to receive therapy that might let them live longer. This study didn’t look into race, ethnicity, gender, or similar factors, however, and the ability to manipulate a large set of genes to change humans isn’t on the horizon.

Previous research has shown that both above- and below-average intelligence and a risk for depression and other aspects of neuroticism can be inherited. But the genetic mechanisms have remained murky, even as ever more genes that contribute to a variety of physical diseases have been mapped.

These two studies provide significant direction in identifying the genes that can affect everyday behavior and intellectual achievement.

One study examined neuroticism, considered a risk factor for a host of traits that can degrade the quality of life, including depression, anxiety, and schizophrenia. Examining genetic traits and surveys from nearly 450,000 people, researchers in Europe and the U.S., and from the company 23andMe found almost 600 genes and 136 regions on chromosomes (“genomic loci”) that have significant correlations with those aspects of neuroticism. Depression and worry seemed to have different pathways, the study found.

The other study, which shared as corresponding author, Danielle Posthuma of Vrije Universiteit Amsterdam, and had an even larger array of researchers and institutions working around the world, examined data from just under 300,000 people to draw connections on intelligence. The study found 1,016 genes and 205 locations, nearly all of them previously unconnected with intelligence, had a correlation not just with intelligence, but with a reduction in risk of unrelated conditions.

That included Alzheimer’s and ADHD. It also found an association with higher indications of intelligence and both longer lives and greater incidence of autism.

The two new studies rely on the increasingly large number of people who have been genotyped, a form of genetic analysis that identifies genetic traits rather than full gene sequences. Globally, hundreds of thousands of people have agreed to have their genetic data used anonymously in studies paired with a variety of health information, questionnaires, and cognitive tests. However, these studies rely almost entirely on people living in the United States and a few European countries.

A meta-analysis relies on re-examining data from multiple studies with enough of a basis of similarity to remove error and reinforce key findings via statistical methods. As a result, meta-analyses can sometimes throw findings of a group of studies into doubt, or provide even more rigorous reinforcement.

These two studies, rather than providing firm conclusions, offer enormous guidance for further research that more directly connects and tests the statistical analyses.