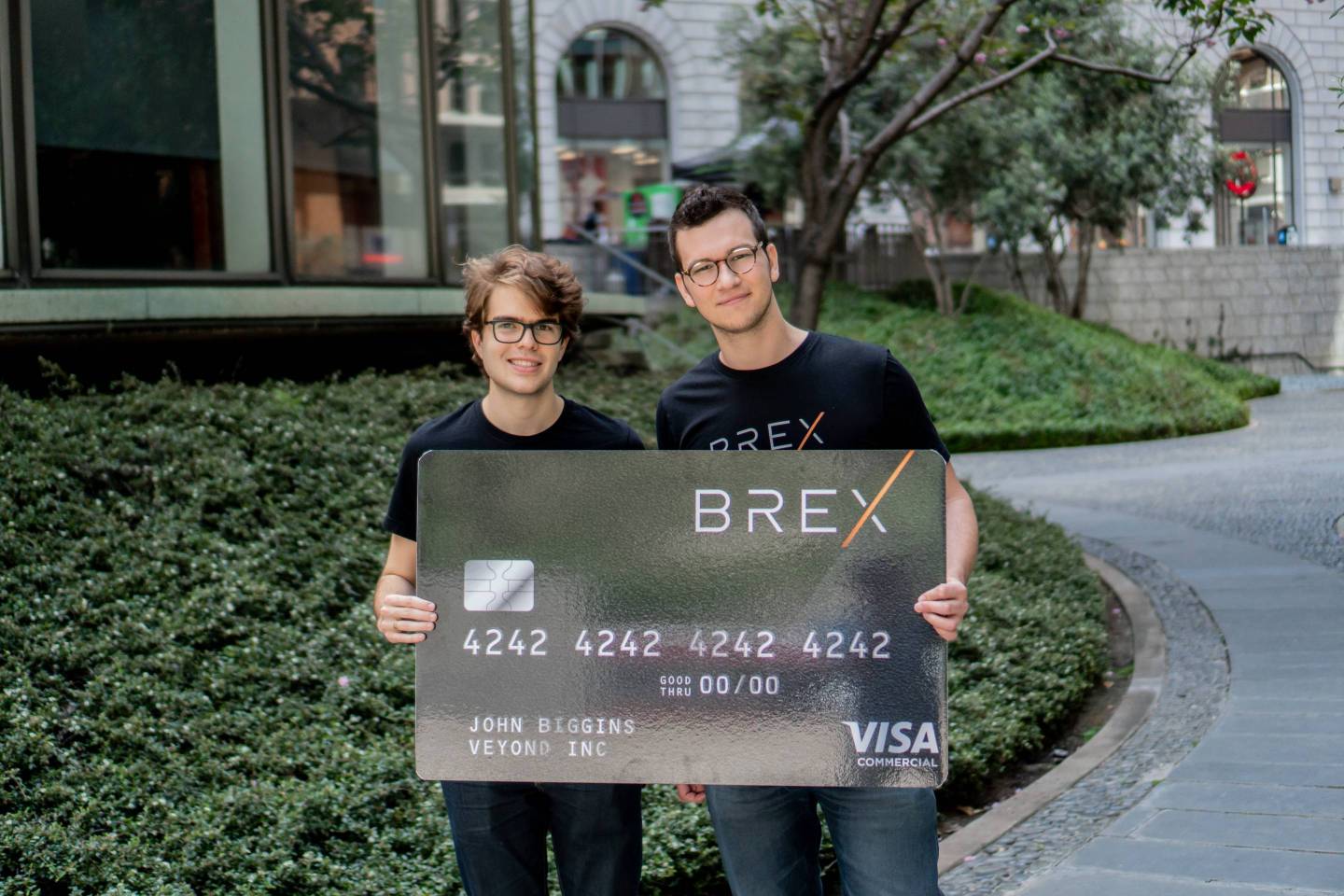 Brex cofounders Pedro Franceschi (left) and Henrique Dubugras, CEO, hold up an oversized version of the credit card they are providing to other startups.
Courtesy of Brex

Y Combinator led the Series B funding round for San Francisco-based Brex, which participated in the tech accelerator’s winter 2017 class and now provides credit cards to many of its portfolio companies. VC firm Ribbit Capital, Thiel and Levchin also participated in the investment, as did Yuri Milner of DST Global, Tiger Global hedge fund billionaire Chase Coleman and former Visa CEO Carl Pascarella. Brex declined to disclose its valuation.

Founded by two young Brazilian entrepreneurs, the idea for Brex came about somewhat serendipitously. After selling their first fintech startup—a Brazilian payments company called Pagar.me—in 2016, Henrique Dubugras and Pedro Franceschi applied and were admitted to California’s Stanford University. But they dropped out after the first semester when their next venture, an augmented reality startup, was accepted into Y Combinator.

A few weeks into the accelerator program, though, they realized they preferred to stick with fintech, and pivoted to the concept that became Brex. They drew inspiration from their own personal experience.

“We couldn’t get a corporate credit card—none of our YC batchmates could either,” says Dubugras, Brex’s 22-year-old CEO. It didn’t matter that every Y Combinator company had received at least $120,000 in funding (the accelerator’s standard deal of admission). Because most of the early-stage startups did not yet have revenue, traditional credit card issuers turned them down. Some startup founders opted to run company expenses through their personal credit card, but Brex’s founders, coming from Brazil without an American credit history, had even fewer options.

“This has been a longstanding pain point for many of our founders,” Anu Hariharan, a partner at Y Combinator Continuity, added in a statement.

So Brex came up with a plan to fill that need: a credit card that does not require proof of cash flows, a security deposit or a FICO credit score for approval—only $100,000 (or more) in a bank account. “We just look at cash—how much investors gave you,” Dubugras explains. “We want to be the best corporate card for startups.”

Since launching a beta version of Brex last September, the company has signed up most of the startups in its Y Combinator class and subsequent batches, including more than 25% of the current summer 2018 batch that just began this month. Brex has also landed some larger clients, including lending startups SoFi and Affirm (founded by Brex backer Levchin), and genetic testing startup Color Genomics. In total, Brex now has more than 1,000 customers (counting multiple employees from the same company separately).

The new funding, bringing Brex’s total capital raised to $57 million, will go in part towards expanding the company’s 30-person headcount and marketing, with a goal of reaching $300 million in spending on its cards this year, and $1.5 billion by the end of 2019. But the bulk of the capital will function as a cushion given the risks of providing credit to fledgling startups.

“A big part of the money is just going to be sitting there in case anything goes wrong,” says Dubugras, citing fraud and other potential problems.

But Brex is not shouldering as much of the risk as traditional banks and card underwriters. Brex credit card balances must be paid off at the end of each month, or the card is canceled—meaning it essentially offers a 30-day loan in the form of a charge card. As Dubugras puts it, “You pay or you pay.” (If a company doesn’t pay, it’s generally because it has run out of money and failed, he adds.)

Instead of charging interest like other credit card companies (which allow unpaid balances to carry over), Brex charges $5 per user per month. As an incentive to lure new clients, however, it’s offering to waive that fee for anyone who signs up in the first two months following Tuesday’s launch. And in lieu of credit card rewards points, Brex is giving away other signup bonuses including $5,000 in Amazon Web Services credits, as well as savings on food delivery services Instacart and Doordash.

Credit card holders can also use Brex’s built-in expense management software, which can analyze spending by vendor and allows users to text images of their receipts in reply to expense notifications to link them.

Brex is open to working with both startups and more mature companies within the U.S., but there are some exceptions—marijuana firms, to which it cannot provide credit given federal drug laws, and cryptocurrency startups, which require case-by-case approval from Brex’s own banking partner, Sutton Bank.

While Brex isn’t yet planning to integrate cryptocurrency as a payment method for cardholders, it may in the future.

“If it becomes mainstream ever, it’s going to be inevitable for us,” Dubugras says.