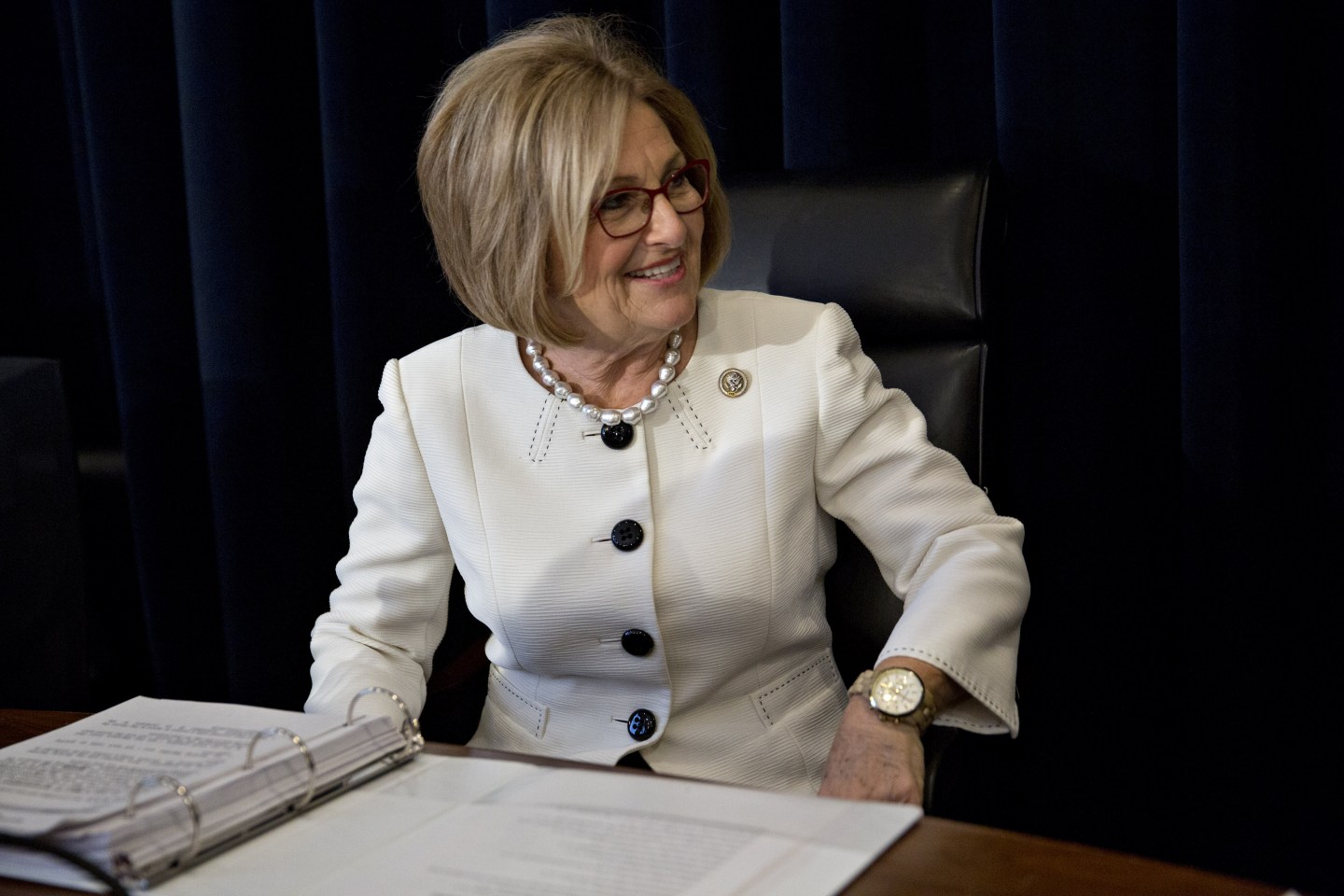 Representative Diane Black, a Republican from Tennessee and chair of the House Budget Committee, waits to begin a House Budget Committee markup hearing in Washington, D.C., U.S., on Thursday, March 16, 2017. While the GOP bill, called the American Health Care Act, was approved by a third committee in the House of Representatives on Thursday, the 19-17 vote was the first time Republicans crossed party lines to join Democrats against the bill. Photographer: Andrew Harrer/Bloomberg via Getty Images
Bloomberg via Getty Images

More women are running for governor in the U.S. this year than ever before, spurred by a Democratic backlash against President Donald Trump and a whopping 18 states that are on the November ballot but have no incumbent in the race.

With some state filing deadlines still ahead, as many as 77 women are expected to run in almost all of the 36 states with a governor’s race this year, according to the Center for American Women and Politics at Rutgers University. That would be more than double the record of 34 female candidates in 1994.

After all the votes are in, it’s possible the number of female governors will meet or exceed the record of nine serving at once, which occurred in 2004 and 2007, said Jennifer Duffy, who tracks gubernatorial elections for the nonpartisan Cook Political Report.

All four of the incumbent female governors up for re-election this year — in Alabama, Iowa, Oregon and Rhode Island — are favored to win. Retiring New Mexico Governor Susana Martinez, a Republican, is widely expected to be replaced by another woman, Democratic U.S. Representative Michelle Lujan Grisham.

And in heavily Republican South Dakota and Tennessee, Representatives Kristi Noem and Diane Black have real shots at their governor’s mansions as the current occupants retire. Of female candidates for governor in 2018, 36% are Republicans, compared with 25% among contenders for the U.S. House.

While primaries are months away in many states, a number of other women already are emerging as top-tier candidates. Democratic Representative Colleen Hanabusa is picking up key endorsements in her primary contest against incumbent Hawaii Governor David Ige and, if she prevails, would be the likely victor in November in the heavily Democratic state.

In another Democratic-dominated state, Connecticut, former three-term Secretary of State Susan Bysiewicz is among the leaders in a crowded field vying for the party nomination. In Florida, former Representative Gwen Graham stands a significant chance of snagging the Democratic gubernatorial nomination in the race for the open seat of retiring Governor Rick Scott, who is running for the Senate. In Michigan, former state Senate Minority Leader Gretchen Whitmer is vying for the Democratic nomination in another open contest.

Of the 77 women expected to run for governor this year, 46 have already filed and another 31 plan to file papers before their states’ deadlines, according to the Rutgers’ center. Two of those who filed have already lost their primary contests.

The office of governor has been a prime stepping stone the presidency, with 17 former state chief executives going on to the White House.

Nearly two-thirds of the women running for governor are Democrats. “Women are generally more Democratic than men are, so you’re seeing a tremendous amount of candidates emerging on the Democratic side, fueled by anger at Trump’s victory,” said Kyle Kondik, managing editor of Sabato’s Crystal Ball, a campaign-tracking project of the Center for Politics at the University of Virginia in Charlottesville.

The fact that half of the 36 gubernatorial races feature open seats creates just as strong a lure for candidacies, Duffy said.

In Tennessee, candidate Black says the open seat was a key factor in her decision to enter the race after serving four terms in the House, including a stint as chair of the Budget Committee. She earlier served in the state legislature for more than a decade, and the retirement of Republican Governor Bill Haslam increased the odds she could take the top state role, she said.

“The seat is open and this governor is termed out, and I thought this is my opportunity to do what I would have loved to have done eight years ago before I went to Congress,” Black said in an interview. “And that is having a stronger voice in setting policy for my own state.”