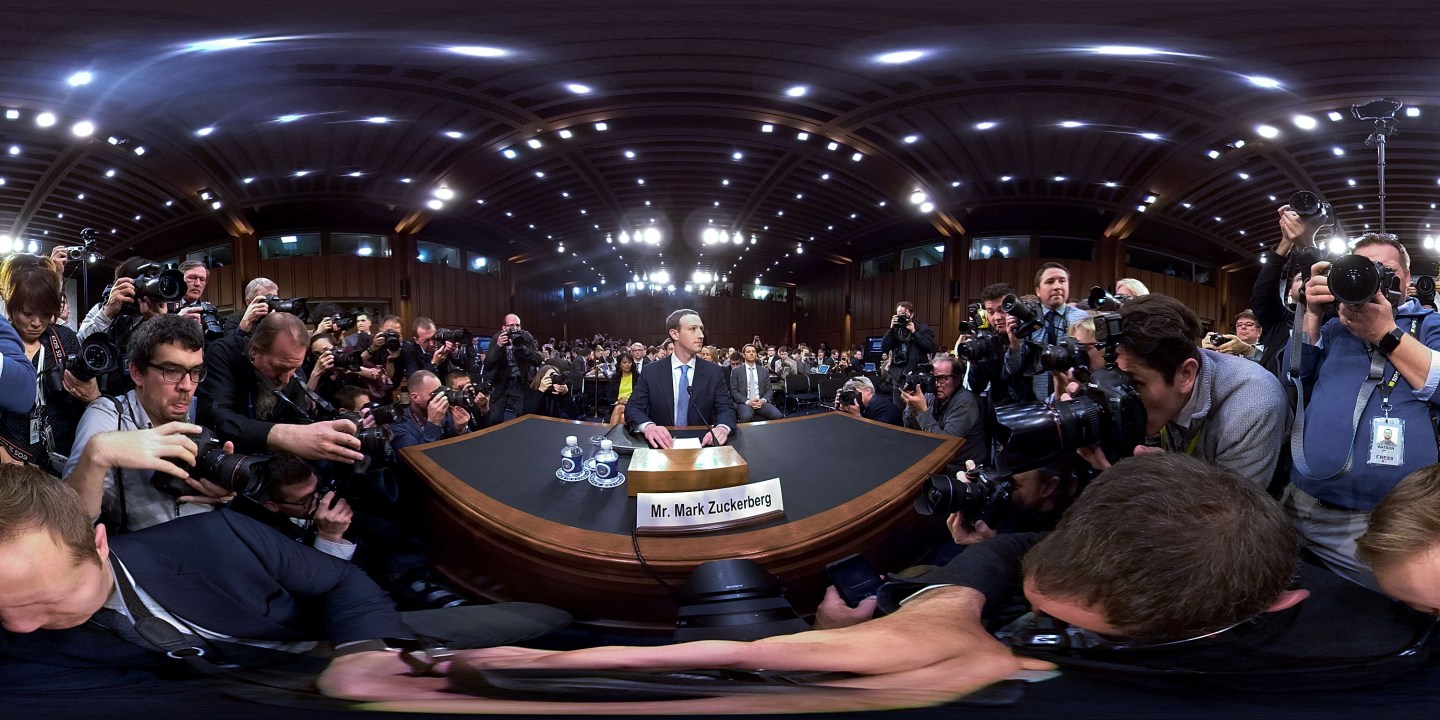 WASHINGTON, DC - APRIL 10: (EDITOR'S NOTE: Image was created as an Equirectangular Panorama. Import image into a panoramic player to create an interactive 360 degree view.) Facebook co-founder, Chairman and CEO Mark Zuckerberg arrives to testify before a combined Senate Judiciary and Commerce committee hearing in the Hart Senate Office Building on Capitol Hill April 10, 2018 in Washington, DC. Zuckerberg, 33, was called to testify after it was reported that 87 million Facebook users had their personal information harvested by Cambridge Analytica, a British political consulting firm linked to the Trump campaign. (Photo by Chip Somodevilla/Getty Images)
Chip Somodevilla Getty Images

Alan Murray here, filling in for Adam Lashinsky, who in turn is subbing for me at CEO Daily. Don’t ask us why. Just take a deep breath, and know it will all be over in five days.

My friend Michael Boskin has posted a smart piece on Project Syndicate, listing the five reasons why big tech companies—which enjoyed stunning earnings and surging stock prices last week—are going to remain at the center of Washington policy discussions in the coming decade. It’s worth a read if you want to understand why Mark Zuckerberg’s congressional testimony is the first, not the last, you’ll be seeing of tech titans on Capitol Hill—and why Jeff Bezos may put his second headquarters nearby.

1. Privacy. Europe has taken the lead on this one, with its far-reaching General Data Protection Regulation (GDPR), but the U.S. eventually will follow, perhaps adopting an affirmative “opt-in” from users before collecting their data, Boskin says.

2. Market power. The four largest U.S. firms by market capitalization are now all tech firms: Apple (AAPL), Alphabet (GOOGL), Microsoft (MSFT), and Amazon (AMZN). (For the moment, Berkshire Hathaway has edged out Facebook (FB) for fifth place.) An anti-trust regime that finds problems with the AT&T-Time Warner merger, as the government now does, can’t ignore the dominance those four have in the economy.

3. Control of information. Current controversies over “fake news,” Russian interference in the election, and bias in online news all underscore the fact that Google and Facebook have replaced traditional media in providing many people the information they need to be effective citizens. That role has always been accompanied by public obligations.

4. Concentration of wealth. The success of the tech giants has not only made their owners among the world’s wealthiest, but also benefitted their employees disproportionately as well, in stark contrast to decades of slow wage growth for the median worker. While policies to address distributional concerns “should not suppress entrepreneurship or discourage work, saving, or investment,” says Boskin, they will be hard to avoid.

5. National security. The increasing sophistication of cyber warfare, as well as China’s “alleged theft of intellectual property and forced technology transfers,” are another reason tech firms will increasingly find themselves in policy makers sights—as demonstrated by recent U.S. action against China’s ZTE and China’s blocking of Qualcomm’s acquisition of NXP.

Boskin, an advisor in George H.W. Bush’s administration, is certainly no regulatory zealot, so Silicon Valley should take heed of his prediction.

By the way, Boskin didn’t write his piece in list form; I did that. If you, like me and Marc Andreessen, among others, are a believer in the power of lists, you should definitely read the Journal’s delightful “ahed” on the topic published Saturday.