Goldman Sachs: China Is Beating the U.S. in the Gene Editing Arms Race 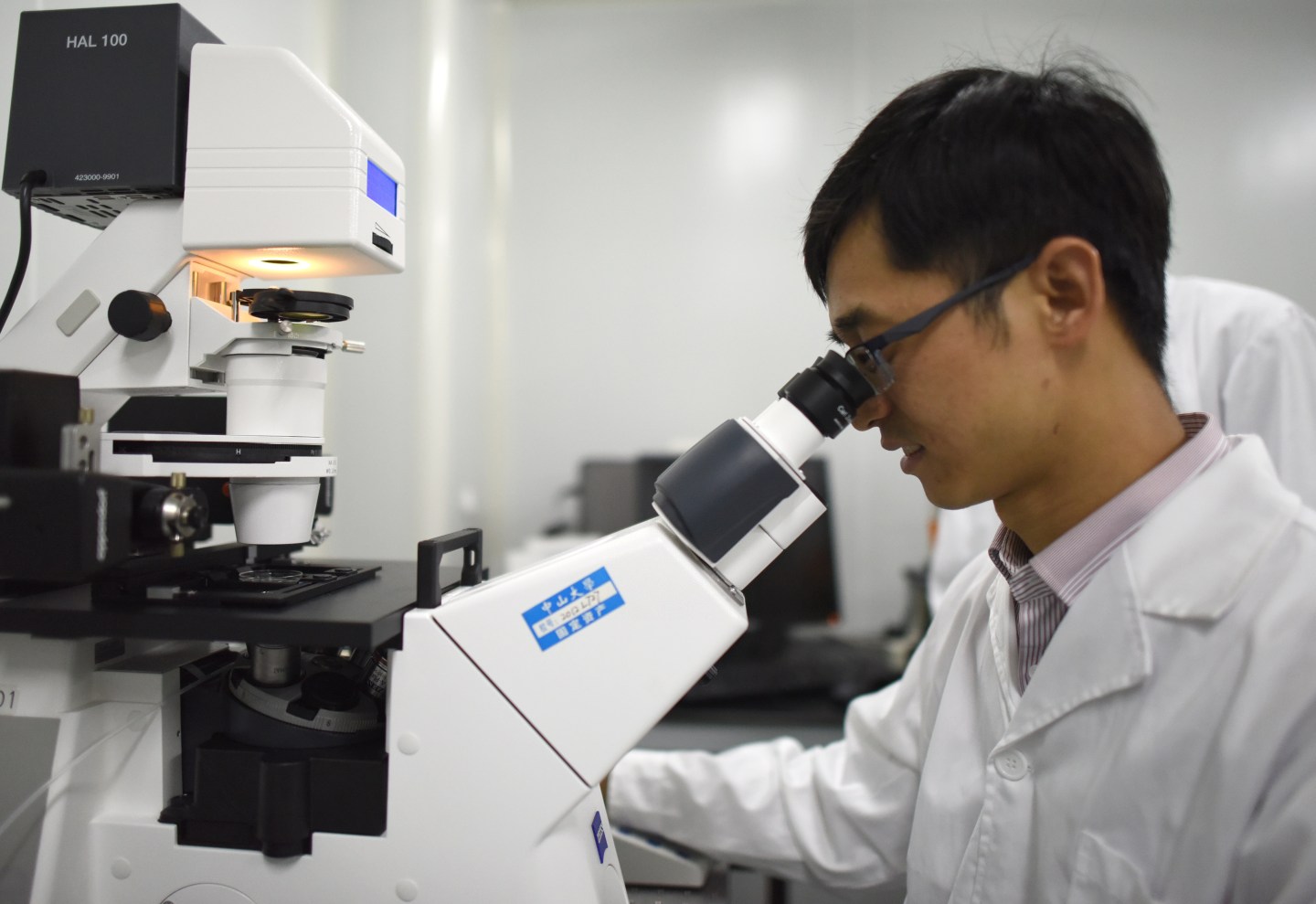 GUANGZHOU, April 7, 2016-- Associate Prefessor Huang Junjiu, also a gene-function researcher, makes experiments at Sun Yat-sen University in Guangzhou, capital of south China's Guangdong Province, April 2, 2016. In April of 2015, biologist Huang Junjiu published the first report of a human embryo with edited genes, sparking a global debate on the ethics of such research. In his study, Huang and his team used spare embryos from fertility clinics that could not progress to a live birth, and modified the gene, responsible for a kind of blood disorder, in the embryos. To accomplish the task, they adopted a powerful technique known as CRISPR-Cas9, which can be programmed to precisely alter DNA at specific sequences. (Xinhua/Lu Hanxin via Getty Images)
Xinhua News Agency Xinhua News Agency/Getty Images

In recent years, the advent of gene editing and cell-engineering technologies to fight rare diseases, cancer, and a number other serious conditions has taken the biopharma world by storm across the globe. The Food and Drug Administration (FDA) approved therapies known as “CAR-T”, from Novartis and Gilead/Kite Pharma, that re-engineer patients’ own immune cells to destroy blood cancers last year. Chinese scientists launched the first known human trials of CRISPR—the genomic tech that involves slicing and dicing the body’s very source code—to combat cancer back in late 2016.

That latter development led renowned scientist and cancer immunotherapy expert Dr. Carl June to predict “Sputnik 2.0, a biomedical duel on progress between China and the United States” on this genomic front. But China is currently winning that race, outpacing the U.S. when it comes to developing new wave CAR-T and CRISPR treatments, according to a new Goldman Sachs analysis reported by Endpoints News.

“As of the end of February 2018, there were nine registered clinical studies testing CRISPR-edited cells to treat various cancers and HIV infection in China, vs. only one study in the U.S.,” wrote Goldman analyst Salveen Richter and her team in a research note. “All of the studies were initiated / sponsored by top-tier public hospitals across China, and [more than] 80 patients were reported as being treated by these investigational genome medicines.”

China is still a bit behind the U.S. on CAR-T trials, according to Goldman, but is hot on America’s trail. And when it comes to CRISPR, the nation has a distinct head start: China’s Natural Science Foundation funded 90 CRISPR initiatives in 2017 alone and nearly 300 in the past four years.

None of this means the U.S. is doomed to fall behind its international rival over the long run. For instance, stricter regulatory scrutiny in China could slow the roll on certain gene-editing and CAR-T projects. And there’s plenty of interest from pioneering biotechs and pharmaceutical partners in America to keep the field competitive. Down the line, though, issues like pricing could play an important factor in who wins the battle for market share around the globe since such treatments are extraordinarily expensive.

The issue is likely here to stay. Earlier this week, pharma giant Novartis struck a massive deal to purchase gene therapy developer AveXis for $8.7 billion, and manufacturing sites across the world are preparing for a big demand spike for groups that can carry out this kind of genetic and biological tinkering on a mass scale.