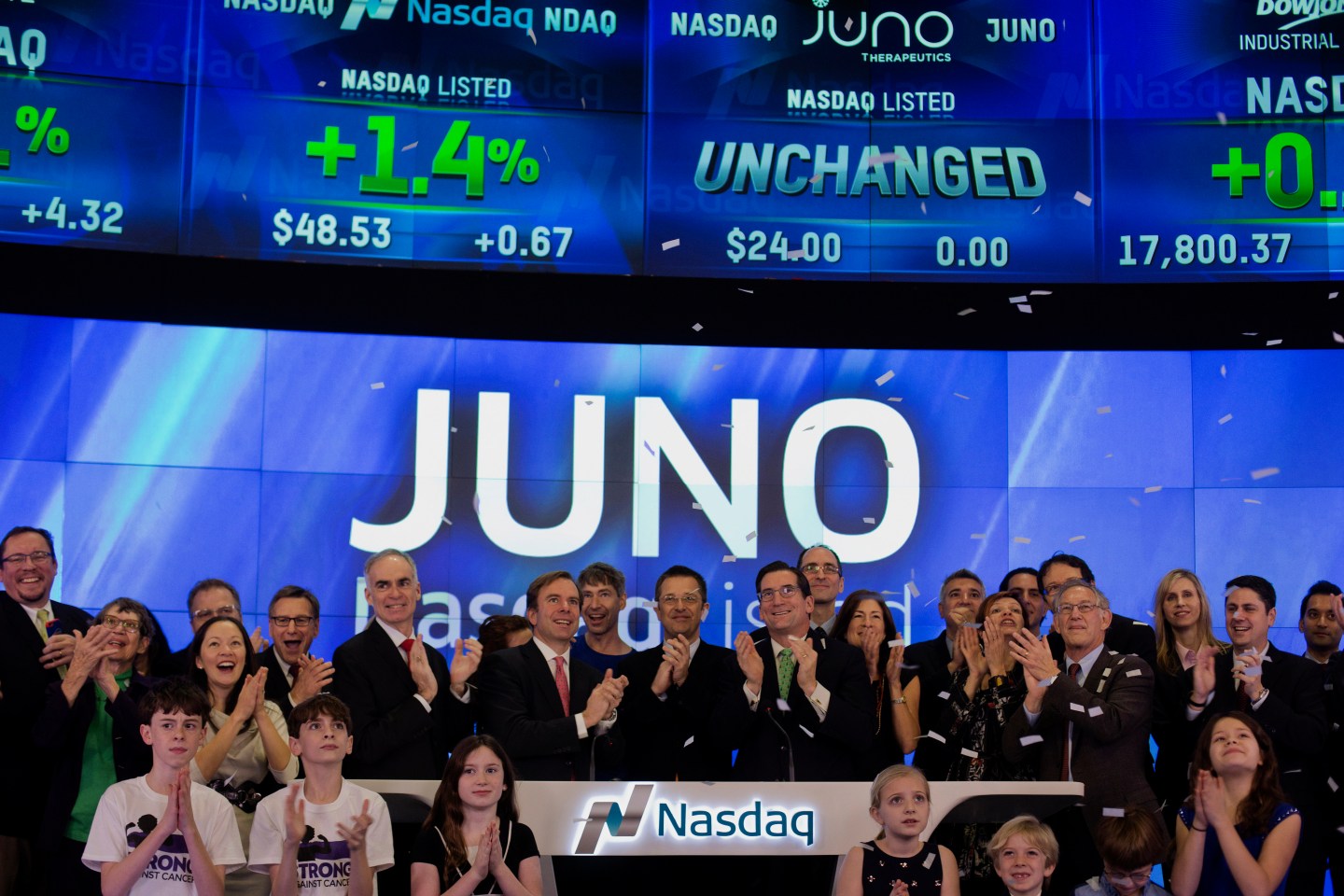 Juno Therapeutics Inc. executives, employees, and their families gather for a photograph during the company's initial public offering at the Nasdaq MarketSite in New York, U.S., on Friday, Dec. 19, 2014. While Nasdaq helped usher in the U.S. stock markets electronic trading revolution four decades ago, its latest pitch to corporations picking their home exchange is the human element. Photographer: Victor J. Blue/Bloomberg via Getty Images
Photograph by Bloomberg—via Getty Images

U.S. biotech giant Celgene announced that it’s buying cancer drug maker Juno Therapeutics in a $9 billion acquisition, one of the largest deals ever struck by the former company. Juno Therapeutics stock rose more than 26% on the news Monday, and Juno stock is actually up more than 75% since rumors of the buyout began swirling last week. Celgene stock remained relatively flat.

The market reaction to the Celgene Juno deal underscores its popularity with analysts and biotech journalists, who largely praised it as a “smart” acquisition on Celgene’s part and a huge boost for Juno. Juno is creating a new type of cancer drug technology called chimeric antigen receptor T-cell (CAR-T) therapies, which literally reengineer patients’ own immune cells to target and destroy blood cancers. The first two of these groundbreaking new kinds of treatments, from Novartis and Gilead (through its acquisition of Kite Pharma), were approved by the Food and Drug Administration (FDA) last year; a single infusion of CAR-T has the potential to wipe out all signs of blood cancers in certain patients with the hardest-to-treat disease.

Juno CEO Mark Alles has come under fire for the company’s management before; but even some of his critics lauded the deal with Celgene.

Market reacting well to $CELG buying $JUNO, as it should. It’s a smart deal. I’ve said not-so-nice things about Mark Alles lately but he got this one right.

So just why is this such a “smart” deal? “Big pharma companies are in big trouble,” says Brad Loncar, a biotech investor who operates a fund focused specifically on companies developing cancer immunotherapy drugs. “They’ve been relying on artificial things to boost their bottom line, such as price increases and inversion mergers and other financial quirks.”

Celgene is exhibit A of this big pharma rut. The company raised the price for its flagship blood cancer treatment three times in 2017. “That’s not a sign of strength, that’s a sign of weakness,” says Loncar.

But with the Juno acquisition, Celgene is getting in on the ground floor of a new kind of cancer treatment space that promises to bring in billions in sales down the line while actually revolutionizing the way certain cancers are treated. The deal, in essence, represents a return to biotech basics: Medical innovation.

Juno, for its part, will be gaining access to a giant firm and the various resources that come with it, including a more experienced management team. But while the M&A harbors benefits for both firms, there are still some likely roadblocks ahead—including the fact that Celgene/Juno will be third to market behind its main competitors Novartis and Gilead.