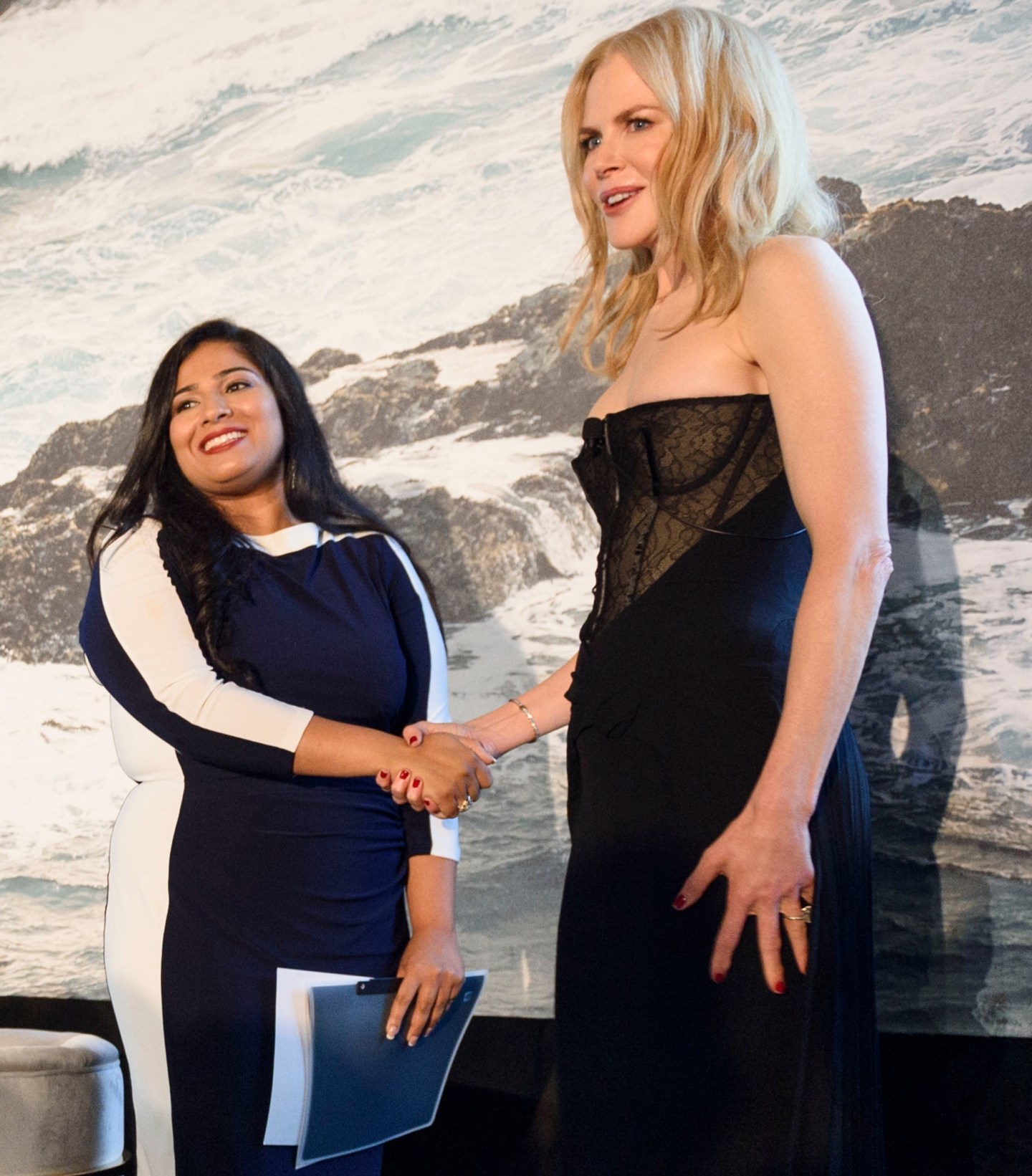 Art often imitates life: The good, the bad and the ugly. In this case, it has imitated the “infuriating, disappointing, demeaning and unjust”—words used by Silicon Valley professional Neha Rastogi to describe her 10-year marriage to an abusive ex-husband and her subsequent ordeal with the judicial system. (In June, a Bay Area judge approved a plea deal for her ex, startup entrepreneur Abhishek Gattani, sentencing him to just 30 days in jail.)

Last week, Rastogi publicly told her story for the first time. The former Apple manager spoke at an event co-hosted by non-profit Futures Without Violence, which aims to end domestic violence, and cable channel HBO, the network that airs Big Little Lies, a miniseries about the complex inner lives of women in a wealthy, seaside town. Actress Nicole Kidman—whose character, Celeste, has much in common with real-life Rastogi—was also on hand for an interview.

About 300 Bay Area techies, politicians, and other luminaries came to the event, which took place in San Francisco. After telling her raw and emotional story, Rastogi received a standing ovation.

She started her talk, though, by naming her alleged abuser. (As part of his deal, last April Gattani pled no contest to abusing his wife. While he did not provide a comment to Fortune, his defense attorney Michael Paez says he denies all allegations.)

“Abishek Gattani, my abuser, and I were married for a little over a decade,” Rastogi told the audience. “We had successful careers. A nice home. And above all a very spirited, loving daughter. From the outside, we were not just living the American dream, we were living the Silicon Valley ‘golden dream.’”

Things unraveled quickly. The marriage had been an arranged one, so Rastogi really got to know her husband only after getting married. “In the entire 10-year marriage, my husband beat me, humiliated me, degraded me,” said Rastogi. “I was no longer Neha. I was a bitch, a whore, a slut and worse.”

According to Rastogi, the abuse didn’t stop when she became pregnant with the couple’s daughter. She made multiple trips to the emergency room, and says her husband beat her even as late as eight months into the pregnancy. “My abuser had brainwashed me into believing that I deserved every bit of the abuse and the terror I went through,” she said.

The techie-turned-activist left the marriage after she “had to face reality”—she says her daughter, now four years old, became scared of her father. But while the marriage ended, another ordeal was just beginning: Despite the duration and severity of the alleged abuse, a judge approved a plea deal for Gattani: 30 days in jail, with credits for good behavior and time already served, plus two and a half months on trash pick-up duty and three years of probation. (Another recent Bay Area case, in which a Stanford student sexually assaulted an unconscious young woman, resulted in a lenient six-month sentencing for the offender. This month’s move by the U.S. Department of Education to rescind guidance on school-based sexual violence could make it even harder to curb such attacks on college campuses.)

Despite the disappointment, Rastogi has decided to work to raise awareness for other victims, shifting her identity from a survivor to an advocate for the cause. “In the last 14 months, I have heard from people all over the world in solidarity and support.”

She wants the case, and her chilling account of the abuse that went on in her marriage behind closed doors, to be a wake up call to everyone in Silicon Valley—and other communities. “We live in your neighborhood, we are your coworkers,” Rastogi told the audience at last week’s event. “And we are sitting beside you here tonight.”