The U.S. Is Weighing Whether to Abandon the Iran Nuclear Deal 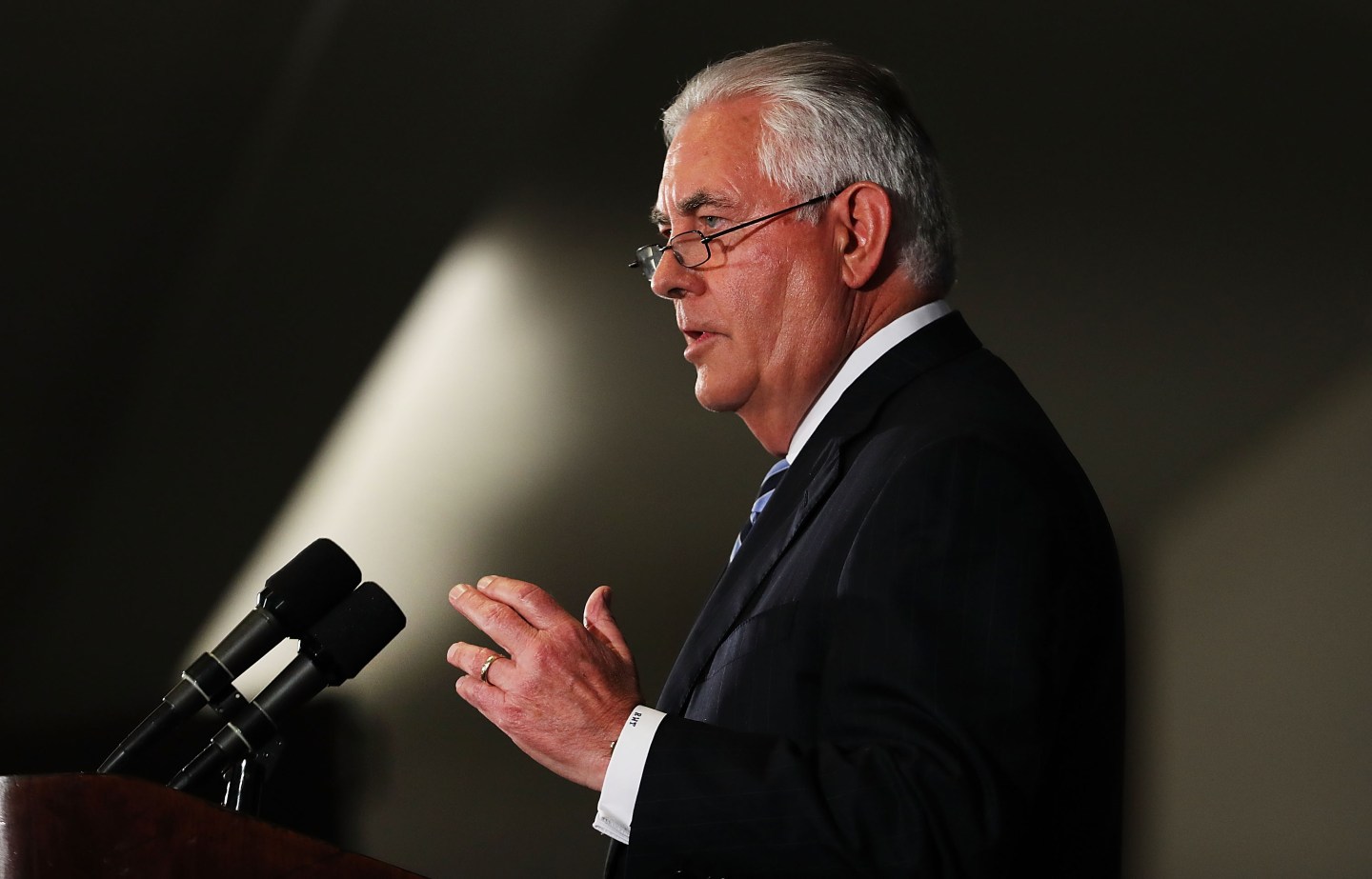 NEW YORK, NY - SEPTEMBER 20: Secretary of State Rex Tillerson speaks to the media following a meeting with Iranian leaders over the Iran nuclear deal on September 20, 2017 in New York City. President Donald Trump declared on Wednesday that he had reached a decision about how to proceed with the controversial nuclear agreement. (Photo by Spencer Platt/Getty Images)
Spencer Platt—Getty Images

The United States said on Wednesday it is weighing whether the Iranian nuclear deal serves its security interests even as Iran said it did not expect Washington to abandon the agreement.

A collapse of the 2015 deal, which U.S. President Donald Trump has called “an embarrassment” but which is supported by the other major powers that negotiated it with Iran, could trigger a regional arms race and worsen Middle East tensions.

Iranian President Hassan Rouhani vowed that his country would not be the first to violate the agreement under which Tehran agreed to restrict its nuclear program in return for the loosening of economic sanctions that had crippled its economy.

“We don’t think Trump will walk out of the deal despite (his) rhetoric and propaganda,” Rouhani told reporters on the sidelines of the U.N. General Assembly gathering of world leaders. He also ruled out the idea of renegotiating the pact.

Trump told reporters he had made a decision on what to do about the agreement but would not say what he had decided.

Matters were no clearer after Iran and the world powers that negotiated the deal – Britain, China, France, Germany, Russia and the United States – met for talks that a European source said included a long discussion between the U.S. and Iranian foreign ministers.

It was the first time that the two men, U.S. Secretary of State Rex Tillerson and Iranian Foreign Minister Mohammad Javad Zarif, had met since Trump took office on Jan. 20.

The EU’s foreign policy chief, Federica Mogherini, said all sides believed there had been no violations to the deal but she was unable to say after the roughly hour and 20-minute meeting whether the United States would stick to it.

“We already have one potential nuclear crisis. We definitely (do) not need to go into a second one,” she told reporters, alluding to North Korea’s pursuit atomic weapons.

Asked if the United States had committed to staying in the pact, she appeared to be at a loss and said: “Another question.” Tillerson told reporters Trump did not wish to leave the Iran nuclear issue to the next president.

“That is the reason he is very, very carefully considering the decision of whether we find the JCPOA to continue to serve the security interests of the American people or not,” he said, referring to the pact formally called the Joint Comprehensive Plan of Action.

The U.S. president, who on Tuesday called the deal “one of the worst and most one-sided transactions the United States has ever entered into,” told reporters he had made up his mind whether to keep the pact but declined to disclose his decision.

Trump must decide by Oct. 15 whether to certify that Iran is complying with the pact, a decision that could sink the deal. If he does not, the U.S. Congress has 60 days to decide whether to reimpose sanctions waived under the accord.

A senior U.S. official said Trump is leaning toward not certifying that Iran is complying with the pact and letting Congress effectively decide whether to kill the agreement.

The official said Trump could always change his mind before the deadline and noted he publicly and privately has fumed about the deal, feeling the United States was taken advantage of.

A source familiar with the U.S. discussions said the Trump administration is also considering ways to leave the agreement intact, sanction Iran for its missile tests and support for extremist groups, and then seek to strengthen the pact.

The prospect of Washington reneging on the agreement has worried some U.S. partners that helped negotiate it, especially as the world grapples with North Korea’s nuclear and ballistic missile development.

French President Emmanuel Macron told reporters it would be a mistake to pull out of the pact.

However, he also appeared to open the door for tougher action on Iran saying the deal was insufficient given Iran’s growing regional influence since 2015.

“Is this agreement enough? No. It is not, given the evolution of the regional situation and increasing pressure that Iran is exerting on the region, and given … increased activity by Iran on the ballistic level since the accord,” he said.

An official from a Gulf nation suggested that his country could accept the deal’s collapse. Should Trump either not certify Iranian compliance or withdraw from the deal entirely, the Gulf official said: “I think we can live with that.”