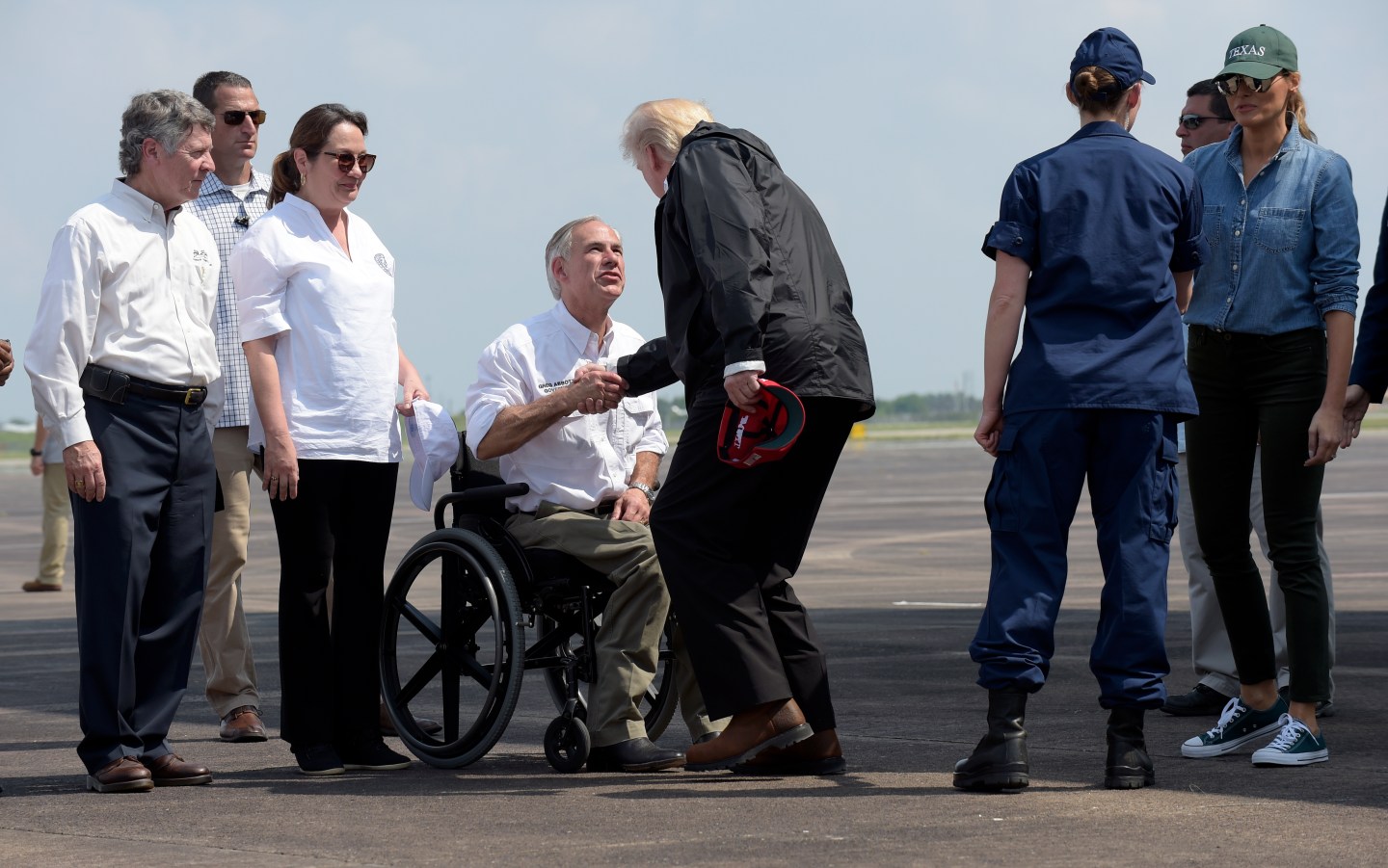 President Donald Trump visited a Houston relief center on Saturday to meet with some of the thousands of Texans forced out of their homes by severe flooding triggered by Harvey, one of the most powerful storms ever to hit the United States.

Visiting the devastated state for the second time in a week, the president and his wife, Melania Trump, were greeted warmly on an unannounced stop to NRG Stadium, a convention complex converted into a center to assist storm evacuees.

The first couple’s first stop was at the center’s “kid zone” where they hugged and chatted with some of the children who were playing there. At one point, Trump, dressed in a black rain jacket and no tie, picked up a child and kissed her on the cheek. The first lady, wearing a cap with “Texas” written in white letters, knelt on the floor with a gaggle of children.

Later, the couple handed out prepared meals to the crowd, pausing frequently to greet and take “selfies” with some of the delighted aid recipients.

The visit gave the president an opportunity to show a warm and empathetic side to victims of the worst storm to hit Texas in 50 years. Some have criticized him for staying clear of the disaster zone during a visit on Tuesday, when he said he did not want to hamper rescue efforts.

Kevin Jason Hipolito, 37, an unemployed Houston resident rescued from the roof of his car two days earlier when his first-floor apartment was flooded, was pleased by Trump’s visit to the fourth-most populous U.S. city.

“I’m a Democrat. It raises the morale,” he said while the Trumps served lunch. “This shows a lot of support.”

Baseball, affectionately known as “America’s pastime,” also returned to Houston on Saturday, a hint of normalcy for a city where the routines of daily life have been disrupted for people of every social stratum.

At Minute Maid Park, the Houston Astros took an early lead against the New York Mets in the opening game of a Saturday doubleheader, the first time the team played at home since Harvey struck. Houston Mayor Sylvester Turner threw out the first pitch, and a moment of silence was observed for those who perished.

Sports have helped other cities rebound from catastrophe, such as when the Mets played the first baseball game in their damaged city 10 days after the attacks of Sept. 11, 2001.

But the Houston game was sparsely attended and the event appeared to lack the drama and emotion that marked the return of sports to other cities hit by catastrophes in recent years.

Harvey came on the 12th anniversary of Hurricane Katrina, which killed about 1,800 around New Orleans. U.S. President George W. Bush’s administration was roundly criticized for its botched early response to the storm, and the Trump administration appeared intent on avoiding such a misstep.

Robert Hendricks, 48, an electrical engineer standing on line at NRG Stadium, was skeptical about Trump’s visit to Houston.

“What’s he going to do, use us as props to serve us lunch?,” he said, but added: “It’s good that he’s showing his face.”

Later on Saturday, the Trumps will move on to Lake Charles, Louisiana, an area hammered by the storm after pummeling the Houston area with more than 50 inches of rain and leading to the deaths of at least 46 people.

The storm, one of the costliest to hit the United States, has displaced more than 1 million people, pushed river levels to record highs and knocked out the drinking water supply in Beaumont, Texas, a city of 120,000 people.

After Hurricane Harvey came ashore last Friday, much of the damage took place in the Houston metropolitan area, which has an economy about the same size as Argentina’s.

Seventy percent of Harris County, which encompasses Houston, at one point was covered with 18 inches (45 cm) or more of water, county officials said.

In the Harris County area of Clear Creek, the nearly 50 inches (127 cm) of rain that fell there equated to a once in a 40,000 year event, said Jeff Lindner, meteorologist with the county Flood Control District.

The storm shut about a fourth of U.S. refinery capacity, much of which is clustered along the Gulf Coast, and caused gasoline prices to spike to a two-year high ahead of the long Labor Day holiday weekend.

When Trump visited the Gulf of Mexico coastal region on Tuesday, he met with state and local leaders and first responders, largely focusing on the logistics of the government response rather than the suffering of residents.

In a letter to Congress on Friday, the Trump administration asked for a $7.85 billion appropriation for response and initial recovery efforts. White House Homeland Security Adviser Tom Bossert has said funding requests for aid would come in stages as more became known about the impact of the storm.

Texas Governor Greg Abbott, who accompanied the president on his visit to the Houston relief center, has said his state may need more than $125 billion.

The storm, which lingered around the Gulf Coast for days, dumped record amounts of rain and left devastation across more than 300 miles (480 km) of the state’s coast.

In the city of Lake Jackson, south of Houston, officials late on Friday ordered additional evacuations of homes near the lake as the city struggled with flooding streets.