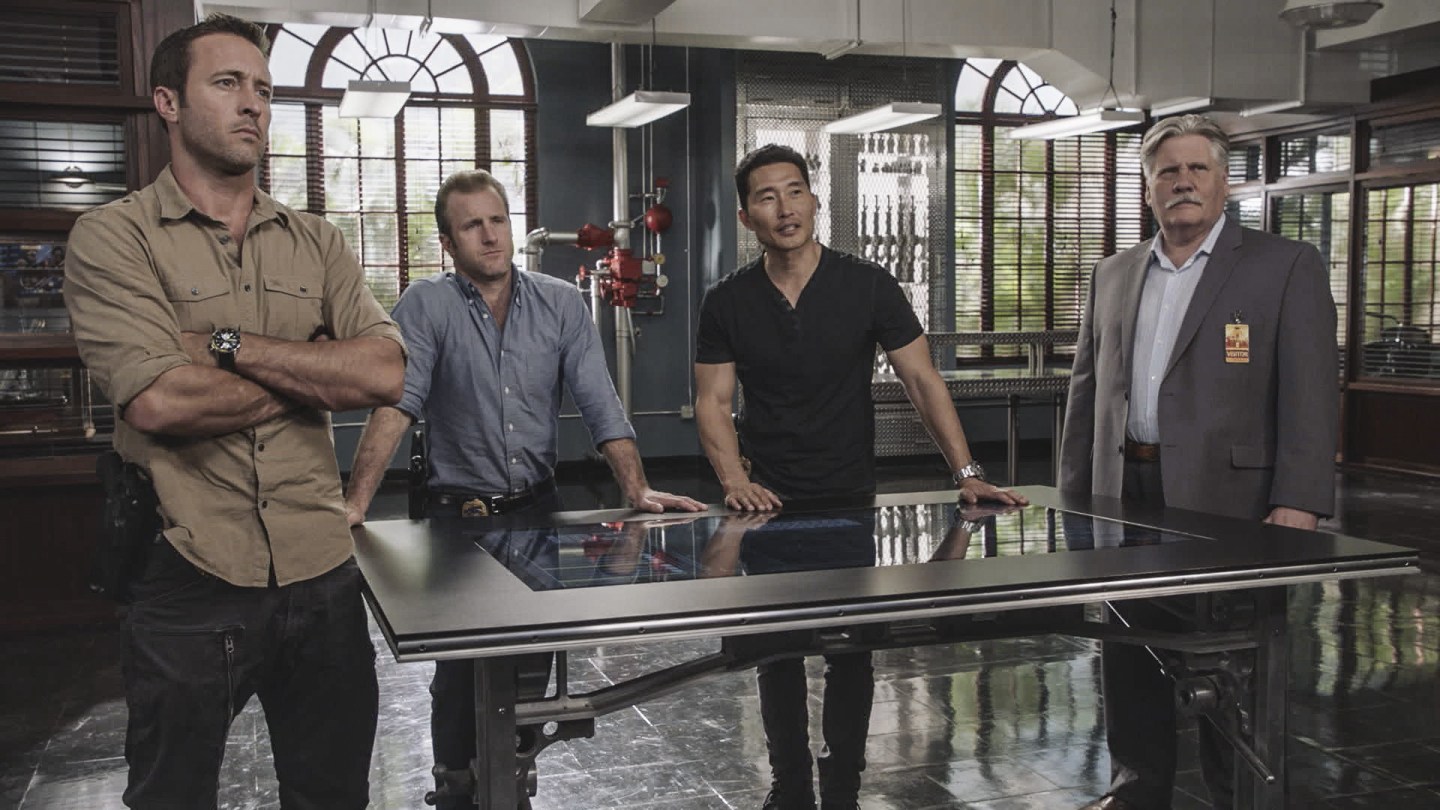 HONOLULU - MARCH 14: "Huikau n makau a n lawai'a" -- Five-0 helps PI Harry Brown (guest star William Forsythe) work the case of a kidnapped wealthy woman whose husband may have something to hide. Also, Rachel tells Danny that she is getting a divorce from Stan, on HAWAII FIVE-0, Friday, March 31 (9:00-10:00 PM, ET/PT) on the CBS Television Network. Pictured left to right: Alex O'loughlin as Steve McGarrett, Scott Caan as Danny "Danno" Williams, Daniel Dae Kim as Chin Ho Kelly and William Forsythe as Harry Brown. ("Huikau n makau a n lawai'a" is Hawaiian for "The Fishhooks of the Fishers Become Entangled") (Photo by CBS via Getty Images)
CBS via Getty Images

For all Hollywood’s talk about diversity, the major broadcast networks have made little progress this year in hiring more women and minorities, according to data compiled by Bloomberg and confirmed by the companies.

About 89% of executive producers of new series airing this season on the four U.S. broadcast networks are white, and 79% are male. Minorities have advanced by less than two percentage points since the 2016-2017 TV season, and women of color claimed fewer executive producer spots than they did a year ago at the two networks that provided data.

Television industry executives have pledged to do a better job of hiring women and minorities—not just as stars but as writers, directors and producers. Executive producers—a group that includes program creators, production and financing executives, and top writers or directors—are among the most important behind-the-scenes roles in TV.

The numbers for the upcoming season demonstrate how much more work is ahead. Take Fox. Even though its biggest hit, “Empire,’’ was created by a black man and stars a mostly black cast, the network fielded a crop of new shows where 42 of the 50 executive producers are white (that’s 84%). And 38 of 50 are men (76%).

“Unless you are putting the thumb on the scale that diversity and inclusion is a mandate, people default to people that they know,’’ Sarah Aubrey, executive video president of original programming at TNT, said in an interview. “We can’t rely on the same old pools of people, and the same pools of stories too.’’

In recent years, Hollywood has been been dogged by criticism of its lack of opportunity for women and people of color. Activists called out the Oscars for nominating no minority actors for two years in a row, forcing the Academy of Motion Pictures Arts & Sciences to recruit a more diverse membership.

TV critics have assailed all the networks for failing to hire more diverse casts, none more so than CBS. This summer, two Asian-American actors quit the TV show “Hawaii Five-O’’ amid reports they were paid less than their white peers. The co-heads of CBS studios got an earful from reporters earlier this month for fielding another crop of shows starring almost exclusively white men and cast by an all-white casting department.

CBS’s TV studio hired the highest percentage of female directors of the eight companies surveyed by the Directors Guild of America last year, and the highest percentage of directors who are minority women. HBO ranked last. CBS has improved in this area thanks to the efforts of Tiffany Smith-Anoa’i, an 18-year veteran of the company who created a department for diversity and inclusion in 2009.

Hiring a more diverse crop of directors is easier to achieve than in some other parts of production because companies can hire directors to make individual episodes of shows they didn’t create or write.

CBS, which has been run by many of the same executives for more than a decade, still lags in casting. The company has less urgency to experiment than some of its peers. Its broadcast network has been the most-watched on TV for 14 of the last 15 years.

Hollywood is hardly the only industry struggling to diversify, but the dominance of white men is particularly striking in an industry with so much power to shape the minds of people all over the world. It’s also notable in a town known for liberal values.

If top writers, producers and executives don’t hire more women and people of color at the lowest rung, even fewer will make it to the top of the heap, said Christy Haubegger, head of the multicultural department at talent agency CAA.

“If you say, ‘I want to have a huge pipeline of female showrunners and diverse showrunners,’ you needed to have created a crop of writers’ assistants who were overwhelmingly female and diverse 12 years ago,’’ Haubegger said.

CAA has run boot camps to train writers and introduce them to more people in the entertainment industry. The agency has also hosted dinners and mixers with writers and showrunners.

NBC, owned by Comcast Corp., has created programs to help promote writers and producers, opening doors for talents such as Aziz Ansari, Alan Yang and Mindy Kaling. The network just created an initiative in which 10 women will shadow other directors for a season and get to direct one episode of a show, said Jennifer Salke, president of NBC Entertainment.

“It’s too easy to say you have good intentions,” Salke said. “You have to create programs to build from the beginning.”

Some top producers, such as Lee Daniels, Ryan Murphy and J.J. Abrams, have mandated hiring more women and minorities for their TV shows, and started programs to mentor aspiring writers and producers. Shows such as “Empire,” “Black-ish” and “Fresh Off the Boat” have large portions of their writing staffs made up of minorities and women. Ava DuVernay hired only female directors for her TV show “Queen Sugar,’’ as did Frankie Shaw for her Showtime series “Smilf.’’

Diversity doesn’t guarantee ratings success. Fox’s viewership has slumped, even for “Empire,” and ABC has also lost ground despite featuring shows such as “Fresh Off the Boat” and “Black-ish” that star minorities.

But many networks do see hiring more women and people of color as a business imperative so they don’t leave potentially lucrative audiences untapped. The Oprah Winfrey Network has fielded some of the most popular TV shows by allying with Tyler Perry, one of the most prominent black writer-directors in Hollywood. Perry signed a deal last month with Viacom, which is looking for a similar boost to its programming lineup.

Netflix, which itself has contended with criticism that it overlooks non-white audiences, poached megaproducer Shonda Rhimes, whose credits include “Scandal” and “How to Get Away With Murder,” from ABC earlier this month.

Broadcasters have long-term initiatives to broaden their pools of talent, but progress can feel painfully slow, even to them.

“Am I happy with the balance of showrunner diversity? Not even close,” NBC’s Salke said. “We’re constantly pushing to do better.”