California Is Inching Closer to Single Payer Health Care. Is It Already Doomed? 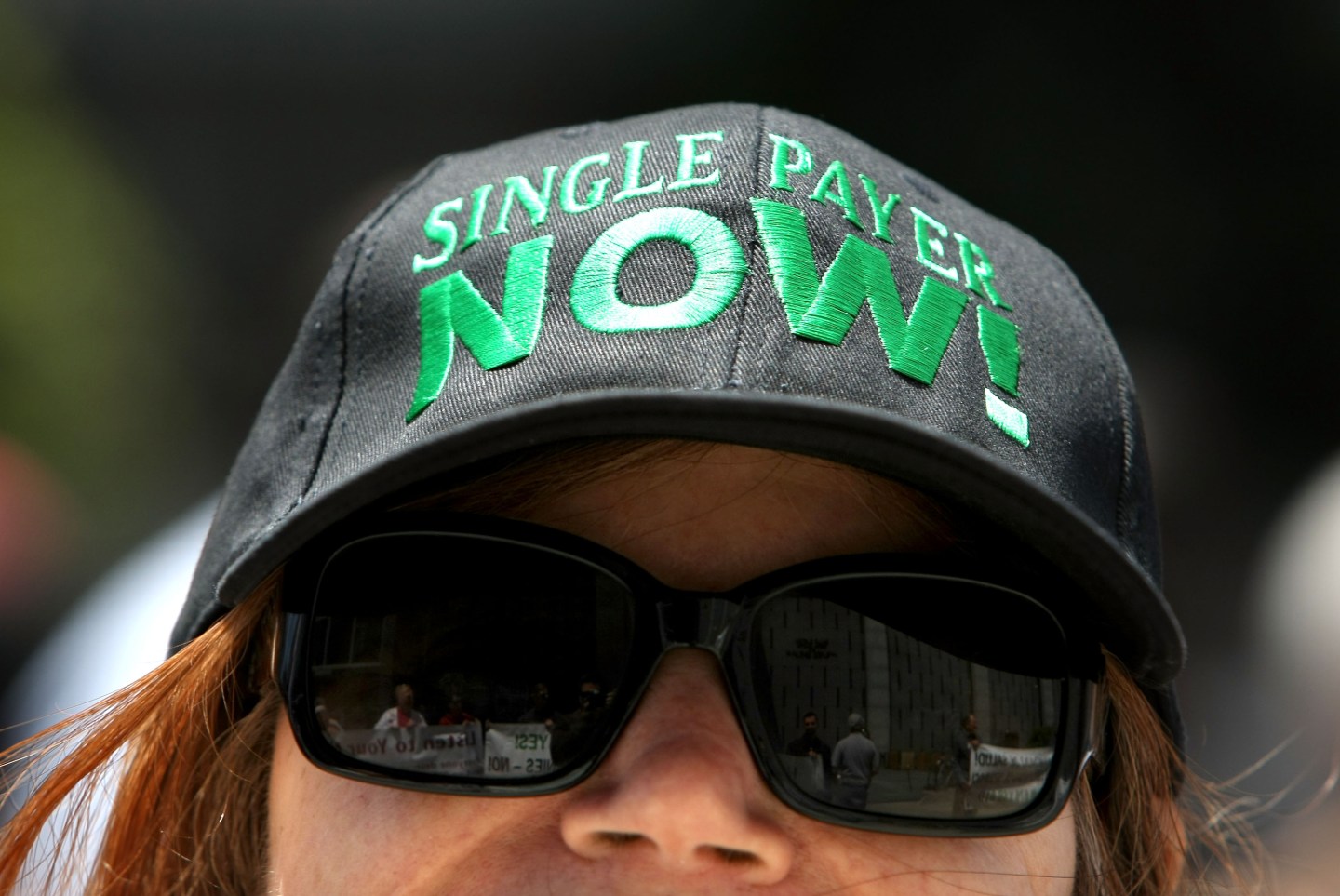 SAN FRANCISCO - MAY 29: A healthcare reform activist wears a hat as she protests outside the office of US Speaker of the House Nancy Pelosi May 29, 2009 in San Francisco, California. Dozens of healthcare reform activists staged a protest outside the office of Speaker Pelosi's office urging her to support single payer healthcare legislation HR 676, the US National Healthcare Act, authored by US Rep. John Conyers (D-MI). (Photo by Justin Sullivan/Getty Images)
Photograph by Justin Sullivan—via Getty Images

On Thursday, the California state Senate overwhelmingly passed a “single payer” health care bill (the vote was 23-14) that supporters claim would lead to universal coverage and lower medical costs for consumers. But the landmark legislation still has a long way to go–and many of its most crucial details are not yet concrete, raising the specter of a high-profile failure along the lines of another single payer plan passed in Vermont in 2011 which was ultimately scuttled less than three years ago.

States have been testing out various insurance market models amid the chaos which has engulfed the Affordable Care Act (ACA), or Obamacare, as the conservative House-passed American Health Care Act (AHCA) makes its way through Congress.

Single payer has long been a rallying call for liberal health reform activists who argue it’s the only way to ensure that everyone has access to medical treatment irrespective of socioeconomic status. However, such a system is easier said than done given the intense complexity and federated nature of U.S. medicine. And the fact that the California bill doesn’t lay out a way to pay for its estimated $400 billion tab could foretell major problems down the road. (There’s also no assurance the legislation will actually pass the California Assembly or receive Democratic Governor Jerry Brown’s signature.)

In the simplest possible terms, “single payer” indicates a health system which has, well, a single government entity responsible for paying for medical care and negotiating costs. That might mean the government pays this money to doctors, hospitals, and other parts of the health sector directly or creates a subsidiary outfit which does so, similar to the National Health Service (NHS) in the U.K.

The idea here is that replacing hugely decentralized, inefficient health care stake holders with a unified payer can eliminate the moral hazard of private firms which may profit at the expense of patients while also making the entire medical sector more transparent, reliable, and ostensibly cheaper.

But while some countries have achieved far more efficient outcomes than the U.S. with single payer systems, nascent attempts to establish them in the U.S. have fallen short. Vermont—the home state of former Democratic presidential contender Sen. Bernie Sanders, a prominent single payer champion—had to abandon its own single payer plan after supporter Gov. Peter Shumlin admitted that the “Medicare for all” approach wasn’t sufficiently funded and could potentially hurt the state’s economy.

California could brush up against the same problems if its plan ultimately passes the legislature and is ratified by voters in a referendum on how it’s funded. And it would certainly face major opposition from private businesses—the largest providers of health care in the country and recipients of massive health care benefit-related tax exclusions—and the various organizations whose taxes would almost certainly be hiked under such a system. That’s not even mentioning the private health insurance industry that single payer could theoretically put out of business.

There’s also the question of how California single payer would interact with a variety of state and federal health care programs which rely on a mix of private and public actors. For instance, benefits managers, insurance companies which service Medicare, and drug makers could balk at price controls put in place in just one state and tie up the Golden State’s medical experiment in court.