The Best Wireless Speakers You Can Buy Right Now 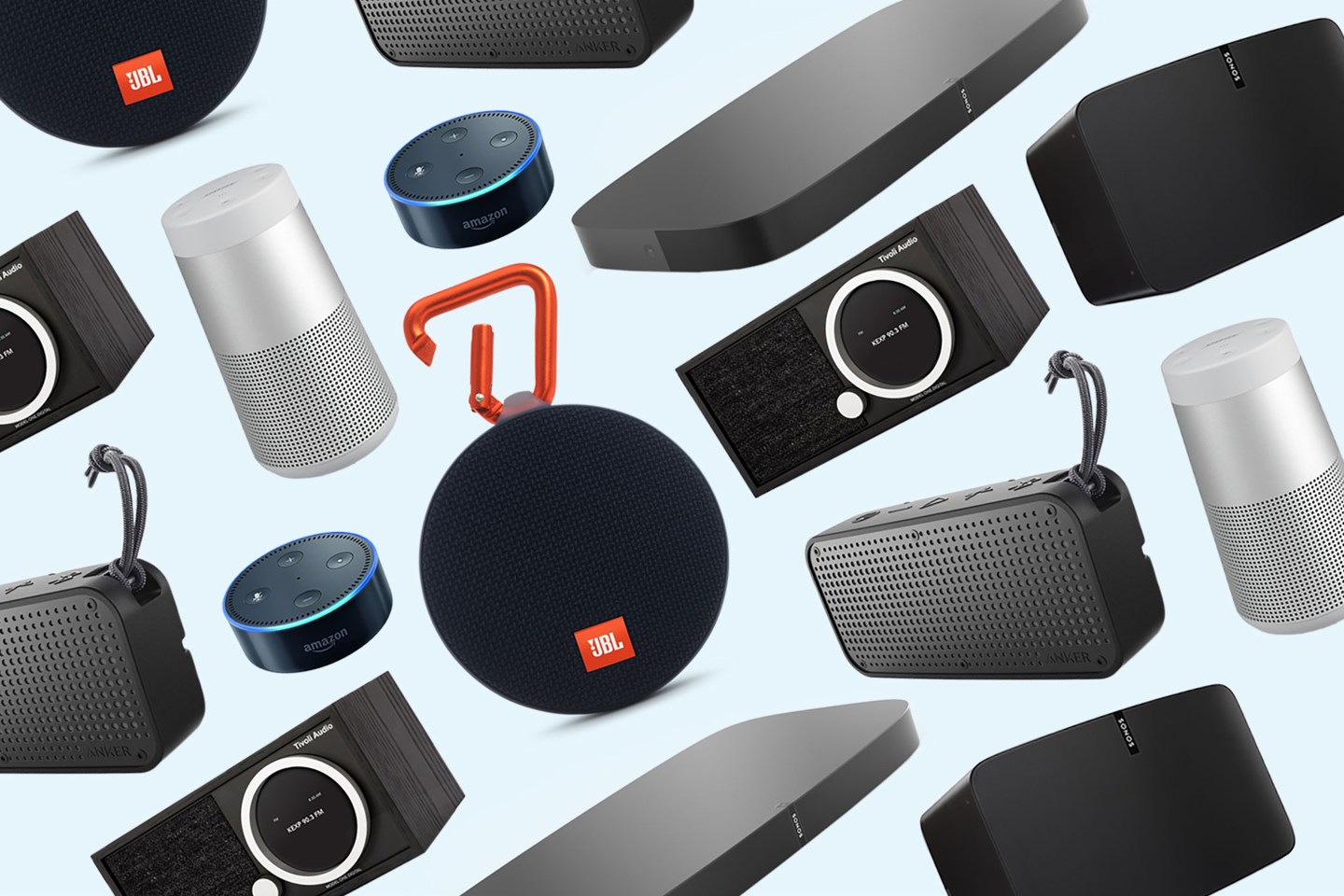 Remember the days when you waited in line for the midnight release of an album by your favorite band? If you don’t, you’re either so old that your memory is going or too young to have used CDs, cassettes, or records. Today, streaming is the music delivery method of choice — and wireless speakers offer a great way to listen.

From clip-on mini speakers to Wi-Fi connected entertainment center sound bars, these seven speakers represent the best tech in their respective categories. Get with the times and give one a listen.

A little sound can go a long way. Case in point: The baseball-sized JBL Clip 2. The Clip can kick out some low-key jams while on a bike ride or on a hike without all the bulk of some of the other so-called “portables.”

With IPX7 waterproofing, the Clip 2 can handle a quick dunk in the water, and with a mic, it can work as a speakerphone, protecting your phone from sand and sun while at the beach. With the ability to daisy chain with another Clip 2, this small wonder can easily double its output. And for its size, the eight hours of battery is impressive enough to give your adventures a full day of soundtracking.

As a Bluetooth speaker, Amazon’s Echo Dot is a controversial pick for a “best” list because its audio quality is rather poor. But it’s here because it has a nifty trick: It can connect to another speaker or even a home stereo system via headphone jack or Bluetooth. As a result, it can turn any speaker you’ve already got into a smart speaker — and that’s worth much more than the Dot’s $49 price tag.

With crisp sound and great bass at a low price, the Anker SoundCore XL is a solid investment. It’s rock-solid, in fact, with a rugged rubber shock-proof coating helping it take a tumble in stride. In addition, IP67 waterproofing lets the XL survive a dip in up to one meter of water without missing a note. And with a 66-foot range and 15 hours of battery life, it’s a very good portable speaker to boot.

The sound put out by this small brick hits above its weight, with solid bass and clear vocals, making it a worthy choice on the beach or in the bathroom. But the best perk of the XL is its ability to do double duty as a portable battery — plugging your phone into the speaker will charge the handset’s battery in a pinch.

Poor speaker placement can be a severe party fouls. The result is some guests get blasted with music, while others can’t hear the tunes. The Bose SoundLink Revolve’s 360-degrees of sound solves this problem in a slick, slender form factor that can rock both inside and out.

Directing sound down, out, and all around, the Revolve has rich depth and full bass, but it doesn’t overpower the room with the low end. And by linking together a pair of Revolves through Bose’s app, you can spread the sound throughout your space, keeping everyone grooving wherever they go. IPX4 water resistance will make sure a little rain won’t dampen the festivities, and the speaker’s 12 hours of battery will keep your party rocking until the break of dawn.

With a crisp, retro design and a simple, subdued monochromatic display, the Tivoli Model One Digital looks at home on a countertop or a bookshelf. But it’s how the Wi-Fi and Bluetooth connected speaker fills the room that matters most, and in that its smarts matches its good looks perfectly.

Connecting directly to music services like Spotify and TuneIn via its companion app, the Model One can work as a standalone sound system without involving your smartphone. But if you want to beam tunes from other music sources via Bluetooth, the Model One does that just fine, too. It also has an FM tuner for grabbing local stations in a pinch. If you’re disappointed that it doesn’t have voice-enabled smarts, you can always connect the aforementioned Echo Dot.

A beast of a speaker with the output to match, the 14-pound Sonos Play 5 will fill just about any space you’ve got with balanced, bassy, brilliant sound. And if one Play 5 is somehow still not enough, the Wi-Fi connected speaker can be paired with other Sonos speakers (including another Play 5) to utterly rock your house.

Bigger doesn’t always mean better, but with six amplifiers, three tweeters, and three mid-woofers, there’s an argument to be made for this kind of heft. Then there’s Sonos’ Trueplay speaker-tuning system, which uses your smartphone’s microphone to customize Play 5’s audio output for your home’s acoustics. The before and after of this experience alone will make you feel better about the $499 investment. Connecting to more than 80 streaming services, Sonos is experienced in grabbing audio via the Internet. One downside: There’s no Bluetooth in this big boy, but there’s an auxiliary audio port in the back.

The LG SJ9 may be far more expensive than the other speakers on this list, but with the ability to up-sample your songs, this sleek bar is a sound investment for streaming music fans. Featuring Dolby Atmos technology, the 55-inch, 5.1.2 SJ9 setup packs two front speakers, a center channel, and a pair of ceiling-angled surrounds, along with a beefy yet stylish external subwoofer. Featuring both Wi-Fi and Bluetooth connectivity, the SJ9 is easy to connect to a tablet or smartphone, whether you want to stream directly from apps or use the baked-in Chromecast technology for services including Spotify, Pandora, and Google Play.

But the magic in the SJ9 is how this sound bar can convert a stream that’s typically 16-bit audio into output that sounds more like 24-bit quality. The result is clear midranges and ample highs, along with warm, thumping bass. All this, and we haven’t even talked about how good it sounds when you watch movies.