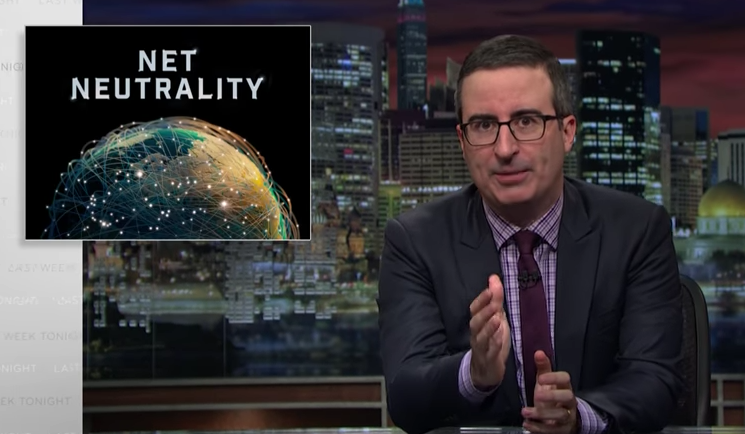 Three years ago, late night comedian John Oliver propelled an arcane telecom topic into the national debate by spurring millions of ordinary Americans to file comments with the Federal Communications Commission in favor of “net neutrality.”

On Sunday night, Oliver devoted a chunk of his Last Week Tonight show to condemning a plan by the FCC’s new Chairman, Ajit Pai, to tear up current net neutrality rules, which forbid Internet providers from delivering some websites faster than others.

In the clip, Oliver urges viewers to visit a website called “GoFCCYourself,” which redirects users to a section of the FCC site where people can comment on the net neutrality proceeding, known as “Restoring Internet Freedom” in Pai’s parlance.

It seems like net neutrality may be in jeopardy again. Here's our new story from last night: https://t.co/vSLVzoZp5k

Viewers took up Oliver’s offer in spades—so much so that the FCC’s servers appeared to be overwhelmed by the flood of traffic. The comment page is currently loading with delays and, according to reports from several outlets, including Motherboard, the site went down altogether for a while.

On Monday afternoon, the FCC blamed the issues on a denial-of-service attack.

“These were deliberate attempts by external actors to bombard the FCC’s comment system with a high amount of traffic to our commercial cloud host,” said the agency.

In Oliver’s new video, the comedian spends considerable time skewering Pai, a former Verizon (VZ) lawyer, and his plan to replace the current net neutrality regime with a more voluntary scheme. Oliver warned Verizon and other large Internet providers will regard any voluntary promises they make “as binding as a proposal on The Bachelor.”

It remains to be seen if Oliver’s exhortations will spur the sort of outcry that caused former FCC Chair Tom Wheeler to shift course in 2014, and introduce the current net neutrality rules. Those rules reclassified Internet providers as so-called “common carriers” under Title II of the Telecommunications Act—a classification that allows the FCC to prevent the companies from creating “fast lanes” from preferred websites or from slowing down other sites.

As in the past, the telecom industry is strongly in favor of Pai’s plan, while Silicon Valley is warning that ending net neutrality is a bad idea.

But even if Oliver’s latest broadside spurs a wave of activism, it’s unclear if that will do anything to sway Pai. The new chair is ideologically opposed to regulation and, with a Republican majority on the Commission, appears intent on ending net neutrality.

This story was updated to add the FCC’s response.