Why Boston Beer Got Into Alcoholic Seltzer Water 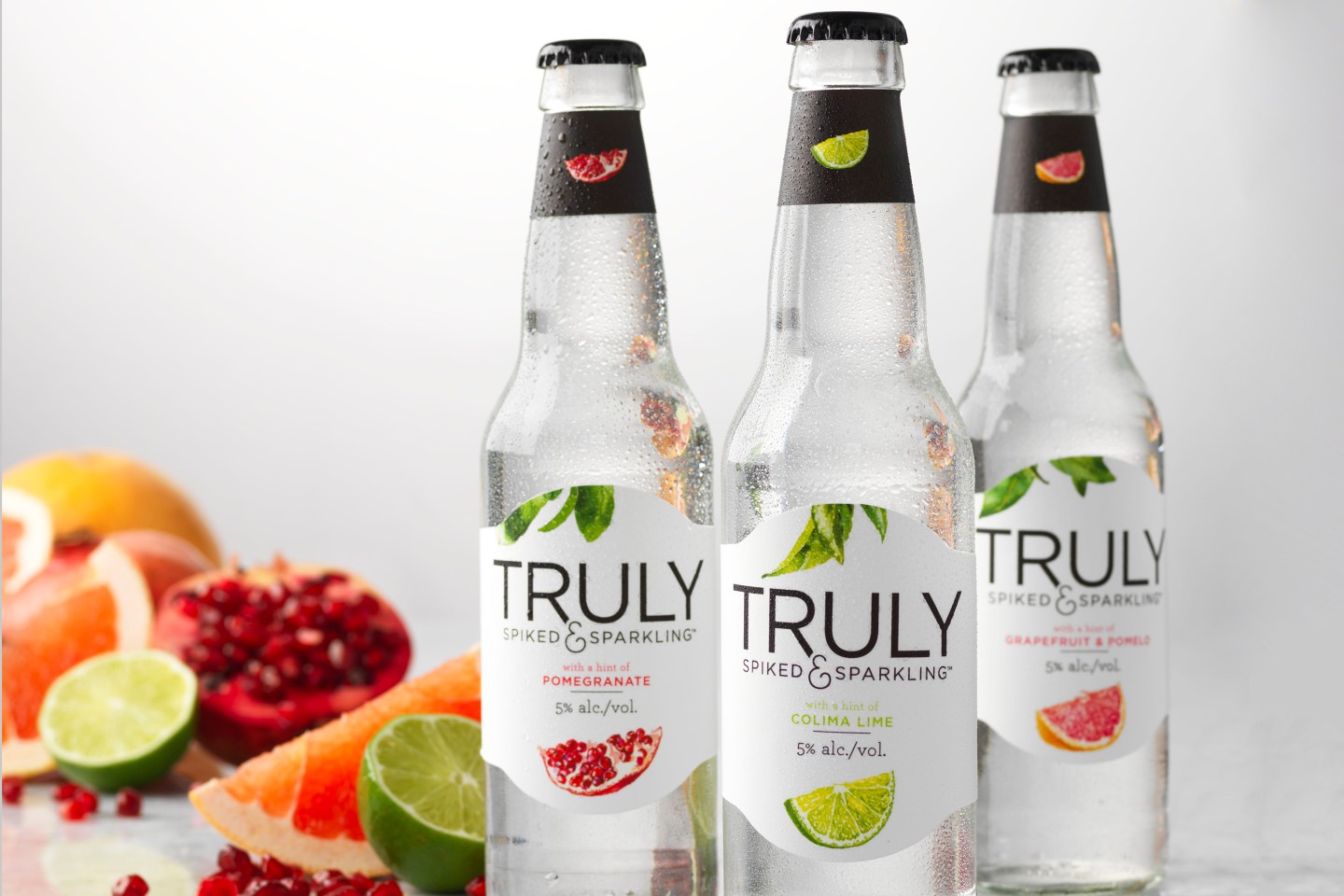 Two summers ago, hard soda—alcoholic versions of classic flavors like root beer and ginger ale—generated a lot of buzz across America’s bars and grocery stores. Hard seltzer could be next.

Roughly a year ago, Sam Adams brewer Boston Beer (SAM) debuted the company’s first hard seltzer under a brand called Truly Spiked & Sparkling, finding inspiration from the increased sales of carbonated bottled waters and broader interest in low-calorie alcoholic beverages. The line, which packs a light punch of 5% ABV and contains 100 calories per serving, comes in citrus flavors like Colima Lime and Lemon Yuzu and typically retails for about $10 per six pack.

“Drinkers and consumers as a whole are moving toward a more health-conscious lifestyle,” said Casey O’Neill, a member of the innovation team behind Truly Spiked & Sparkling. “Truly with 100 calories and one gram of sugar works well into that [trend].”

While hard variations of sodas and seltzers are both new and emerging categories within the broader $108 billion beer market, there’s an interesting interplay between the two. The former finds inspiration from a carbonated soft drink industry that has seen 12 straight years of sales declines in the U.S. as consumers buy more bottled water and other healthier drinks. Seltzer, meanwhile, is a booming business. The nation’s largest non-alcoholic seltzer brands, including Dr Pepper Snapple’s (DPS) Canada Dry and Schweppes and Coca-Cola’s (KO) Seagram’s, are all growing.

But hard soda came first. As Fortune reported in 2015, that trend was led by the soaring popularity of Not Your Father’s Root Beer, which is made by Illinois-based Small Town Brewery. Boston Beer followed Small Town into the category with a hard soda brand called Coney Island Brewing.

In the world of hard seltzer, Boston Beer’s goal is taking a market-leading position before others jump onto the trend. “Based on our prior experience in soda, I think we’ve concluded you’ve got to be very competitive in the first 18 months to emerge in the top two, three in a category,” said Boston Beer CEO Martin Roper during a conference call with analysts last month. “And if the category turns out to be big, then we wish to be a player; and if it didn’t, we would not regret having placed those bets.”

Boston Beer was also an early player in cider, where it has the top-selling brand with Angry Orchard. While cider sales have softened—partly because of competition from the emerging hard soda category—it remains the largest segment of the three with nearly $470 million in total category sales over the past year, according to Nielsen’s data tracking off-premise (i.e. retail and grocery) channels. Hard soda’s total is $289 million annually, while hard seltzer is a relatively small $52 million for those channels.

“I don’t think we are going to see [hard seltzer] reach the size of hard soda, but we will see as new players enter, especially this year,” Danelle Kosmal, vice president of Nielsen’s beverage alcohol division, told Fortune. Kosmal added that continued innovation on flavors could help the category. In March, Truly launched a new flavor called “Lemon Yuzu.”

Ciders, as well as hard sodas and seltzers, are a way for brewers to compete more aggressively with spirits makers, which have generally done a better job innovating around flavors and getting new consumers into their category. Flavored whiskeys, for example, helped companies like Beam Suntory and Brown-Forman (BF-B) lure more women to brown spirits. Brewers haven’t done as good of a job marketing and developing products for women over the past decade, though the launch of hard sodas and seltzers can help.

At Boston Beer, O’Neill‘s own thinking about innovation mirrors that trend. “I’m health conscious, I work out, and I was hanging with friends after a workout and wanted something fresh and light,” she said. “Cocktails can be complicated to make, wine is higher in alcohol.” So she thought: why not drink something that’s easy and packs a lighter punch?

O’Neill said another trend she was eying was the rising interest in sparking water as a non alcoholic drink. “My friends and I are switching over from soda to seltzer water, that’s where the inspiration came for me,” she added.

There are still a few things the industry needs to figure out as it aims to build out this business. First of all, there isn’t even a formal name for the category. Nielsen says that it has heard it called hard seltzer, spiked water, and spiked seltzer. Picking a single identity would help for marketing purposes.

There is also an issue with the retail distribution strategy. Roper last month said that retailers are being more cautious about their buying for hard seltzer after hard soda suffered from lagging interest from consumers after a big spike in demand when those products first hit shelves.

“We’re optimistic, but we don’t know how big is big and we don’t know whether it will act like sodas and boom-bust or whether it has a long going traction,” Roper said. “But what we have said is we want to play and we want to spend money to compete.”

For Boston Beer, a hit from the hard seltzer world could be helpful as it confronts demand weakness for the core Sam Adams brand and especially from seasonal beers amid a highly competitive craft beer market. Management has told Wall Street that one of the core long-term focuses is innovation, with the current focus on ensuring Truly Spiked & Sparkling stays atop the hard seltzer category.