Root beer is the next big thing in craft beer 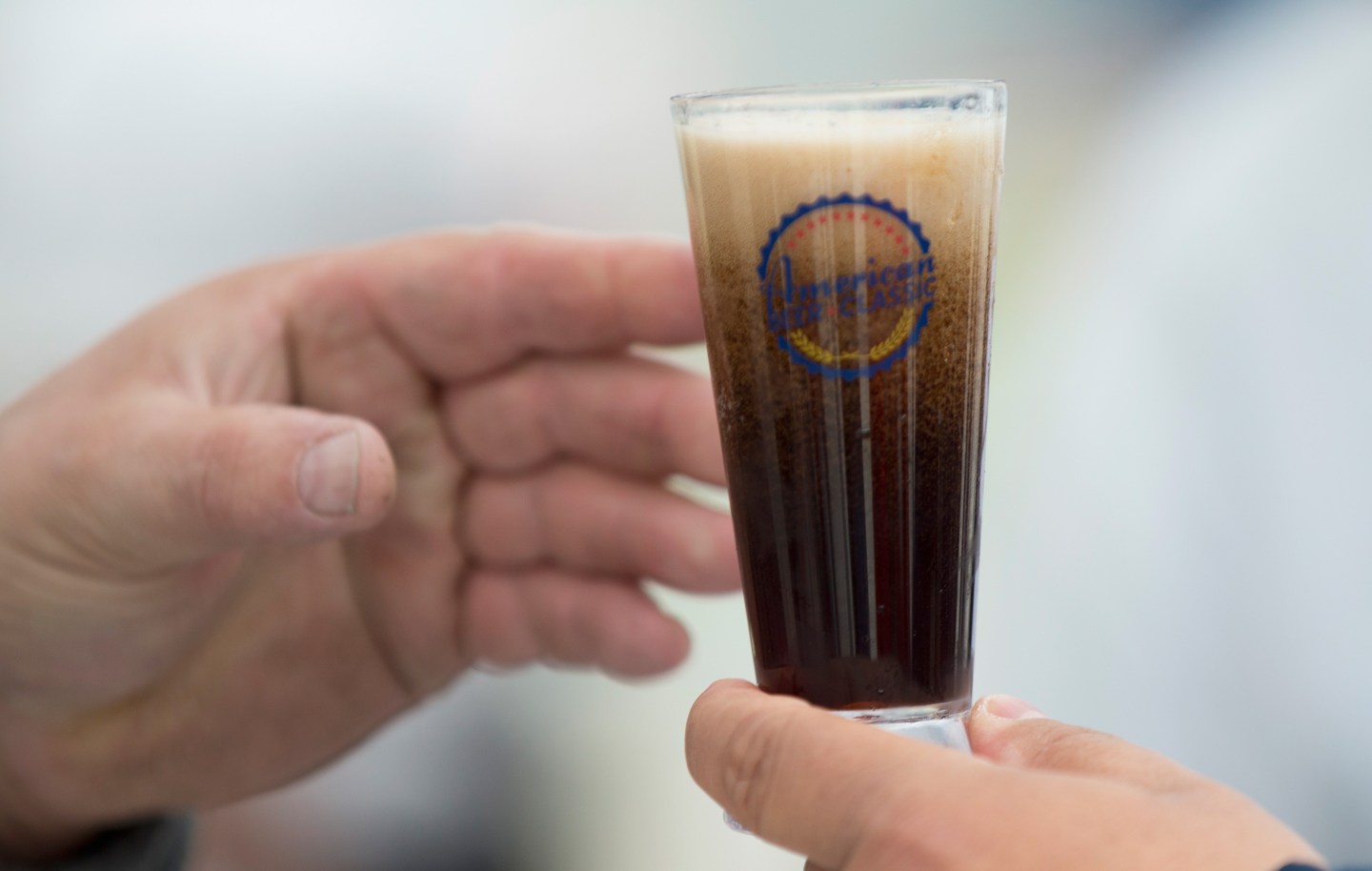 CHICAGO, IL - MAY 09: Small Town Brewery offers a sample of their Not Your Father's Root Beer spiced beer at the American Beer Classic craft beer festival at Soldier Field on May 9, 2015 in Chicago, Illinois. The annual festival attracts about 10,000 guests. U.S. store sales of craft beer surged 11.8 percent in 2014 and have gained 2.7 points of market share in the past four years. Large beer makers still dominate the industry but they have been trying to shore up sliding sales by purchasing craft breweries. (Photo by Scott Olson/Getty Images)
Photograph by Scott Olson — Getty Images

A few weeks ago, while out enjoying a few cocktails with my college friend Melissa, her last drink of the night ended up being the most memorable.

“Oh my god, this is so good!” she yelled at a packed bar in the Center City section of Philadelphia. I had a sip (it was delicious) and basically it tasted like root beer, but with a hint of alcohol. We ended up talking about the beer for 10 minutes. We even got the bartender in on the discussion. It was by far our favorite drink of the evening – even more enjoyable than my reliable drink of choice: ginger ale with whiskey.

This moment was unique for a few reasons. I’ve been enjoying cocktails with Melissa for 15 years now, and over that period of time, we’ve had hundreds of drinks together. This is the first time I recall such an elaborate and ecstatic discussion about what we were drinking.

It is the “eureka” moment that beer and spirits producers try to replicate at industry parties, in advertising and on massive billboards when promoting their brands. Ads often feature a group of friends holding the latest new drink or established brand. The hope is that in real life, they’ll spend time talking about it too. That rarely happens. People just want a drink to be tasty.

For Melissa and me, the discussion ended up centering on the fastest-selling new beverage in the craft beer category this year: Not Your Father’s Root Beer, which is made by Illinois-based Small Town Brewery.

It turns out the beer is a hit. Sales for the brand totaled $7.2 million from the beginning of the year through June 14, according to IRI data cited by Beer Marketer’s Insights. That is good enough to rank it among the top 30 craft beer brands. While it is a new, mega hit, Not Your Father’s Root Beer is far smaller than market leader Sierra Nevada Pale Ale, which notched almost $59 million in sales over the same period.

Still, that top 30 list rarely sees new entrants, so Not Your Father’s Root Beer is shaking up the industry in a notable way. It is even exceeding the sales of new offerings from larger rivals including Sam Adams, New Belgium and Sierra Nevada.

“Something is indeed going on,” said Chris Shepard, an assistant editor at Beer Marketer’s Insights. He said the beer is selling well and the industry is still trying to piece together just how sustainable this hit will be.

It helps that Small Town Brewery got a lift from a distribution agreement with Pabst Brewing, which last month announced it was taking the beverage national. It began selling the beer in March 2015 and the beverage is now in 38 states, though some retailers are reportedly having trouble keeping it in stock. Pabst said none of the retailers or distributors can keep it in stock. Of course, they are thrilled with the beer’s early success.

“Our distributors are saying this could be the beer of the summer – the beer of the year,” said Rich Pascucci, vice president of business development at Pabst. He says there is a lot of white space for the beer to expand, because it is so different in both taste and the production process utilized by Small Town Brewery.

The success is already leading to copycats. Coney Island Brewing, backed by Sam Adams maker Boston Beer (SAM), already has come up with a replicant brand. And beer observers say the popularity of a root beer beer may lead to more alcoholic-type soda drinks.

“A lot of people are asking the question: How long will this last?” said Shepard. “Is this a summer thing, is this a new category of hard sodas – those questions are still being asked. It is an important question: Is this just a fad?”

My first taste of the beer was in early July, so last night, I decided to buy a six pack. At my local Fairway (FWM), it wasn’t initially on the shelves and I was convinced it was sold out. But after asking an associate for help, he said “Oh, we just got a new order in” and proceeded to roll out a few dozen six packs. The Upper East Side Fairway is fully stocked.

Last night, I realized the limitations that Not Your Father’s Root Beer will likely confront. Sure, it is delicious. But would I want more than one in any sitting? Probably not. When Melissa and I had it earlier this month, we also agreed her boyfriend probably wouldn’t go for it. So while the beer is refreshing, it might be a tough sell to the stuffy craft beer connoisseur. And will it stay popular beyond the summer months? That’s hard to say, too.

But for now, Not Your Father’s Root Beer is having its moment. It was the first six-pack I bought for my own personal use in my home in well over a year. And if it can convince others to do the same, Small Town Brewery has a hit on its hands.

This post has been updated to add comments from an interview with Pabst Brewing.