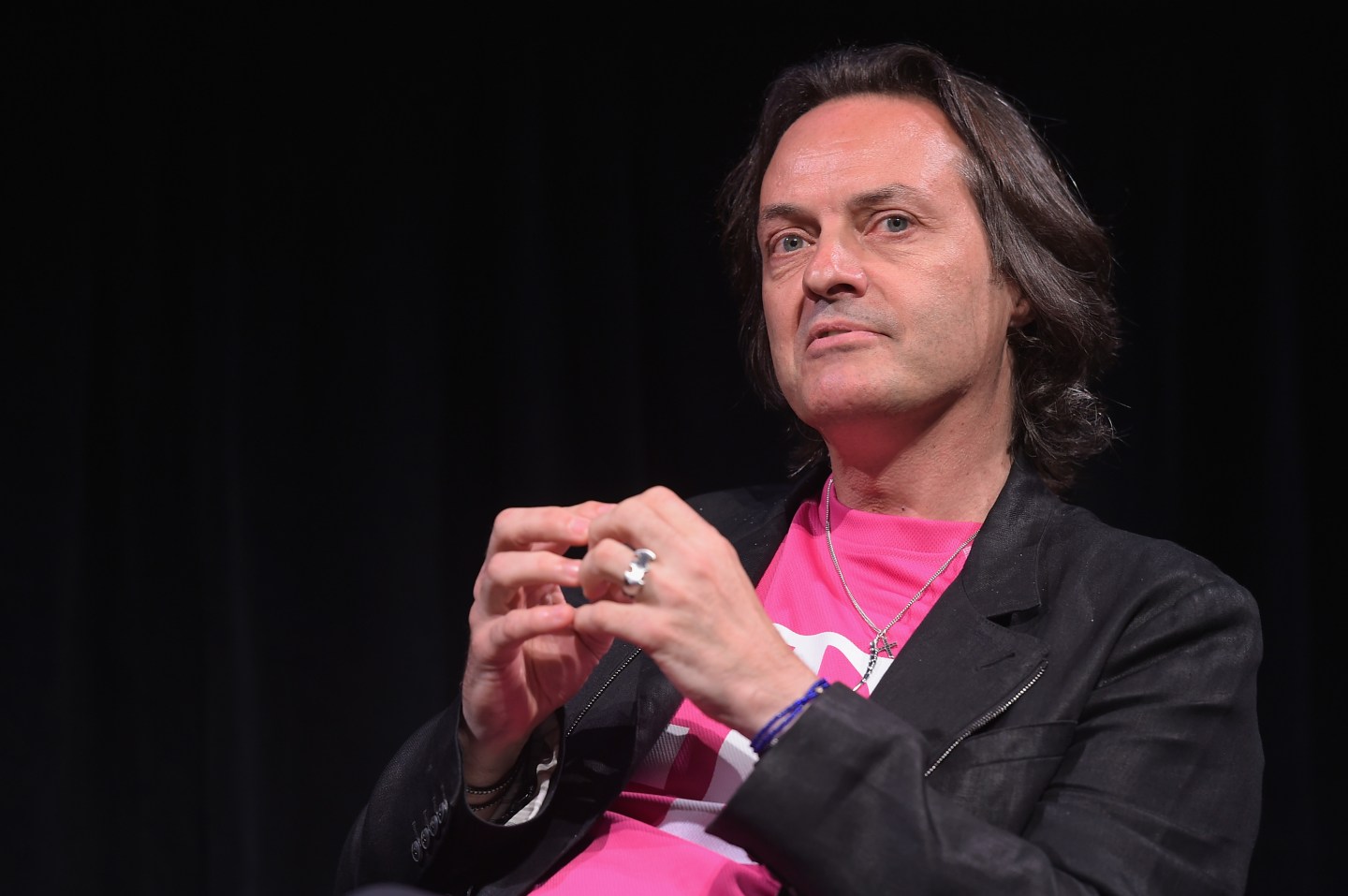 With so much attention paid to possible mergers and acquisitions for Verizon, AT&T and Sprint over the past week, T-Mobile CEO John Legere may have felt a little left out.

So after reporting strong first quarter results, he spent a lot of time on Monday talking his way back to the head of the M&A line.

“There are some real possibilities for creating shareholder and customer value through various scenarios with wireless carriers and other players or amongst wireless carriers,” Legere told Fortune after his first quarter earnings call. With a 12-month spectrum auction ban on merger talks for the industry about to expire, “it’s fun to come out the other side of that year in such a formidable position,” he adds.

On Monday’s earnings call with analysts, the CEO of by far the fastest growing wireless carrier put on the table the possibility of deals with satellite TV service Dish, smaller wireless competitor Sprint or a cable company like Comcast (CMCSA) or Charter Communications (CHTR).

Sprint’s majority owner SoftBank has made no secret of its desire to merge with T-Mobile, and Legere said he’s ready to talk, as well. “I look forward to being able to hear their opinion directly at some point,” he told Fortune.

Sprint has some challenges with high debt and mixed financial results, but Legere also sounded interested in a partial deal, perhaps for some airwave rights. “I think we all tend to agree that they’ve got a tremendous amount of spectrum that, in and of itself, is of value regardless of the enterprise,” he said.

The Federal Communications Commission prohibited wireless bidders from talking during the recently ended auction for broadcast airwave rights. But the ban finally expires on Thursday, and Legere sounds eager to get started.

“This period of not being able to talk to each other has caused a lot of churning around at a time when it seems like Washington would look favorably upon some of these things,” he says. “And that’s further accelerated by the several players who have admitted that they either want to or need to do something.”

Legere’s remark follows some hit-or-miss comments from Verizon (VZ) CEO Lowell McAdam last week. After a horrendous first quarter where the nation’s top wireless player lost regular monthly customers for the first time, McAdam first indicated he had little interest in a merger with a big cable company. Then in a subsequent interview, he expressed interest in talking to Comcast, CBS (CBS), and Walt Disney (DIS). That followed a year of McAdam saying he didn’t want to copy AT&T’s strategy of paying up for big content via the $109 billion Time Warner acquisition.

Sprint (S) CEO Marcelo Claure did not hit the interview circuit, but a Bloomberg report citing anonymous sources said the smallest wireless carrier wanted to get back in the M&A game, too, possibly by merging with T-Mobile (TMUS) or looking at other deals.

AT&T (T) boss Randall Stephenson is vying to buy tiny Straight Path Communications, which owns high-frequency airwave rights suitable for the next generation 5G networks coming in a few years. After rumors of other interest last week, Straight Path (STRP) said on Monday that AT&T’s $1.6 billion offer was surpassed by an unknown bidder. Aside from Straight Path, Stephenson still has a regulatory battle ahead getting his $109 billion Time Warner (TWX) deal approved and probably has to sit out the next round of industry consolidation.

Major telecom consolidation hit a regulatory roadblock under the Obama administration, which effectively killed attempts by both AT&T and Sprint to acquire T-Mobile. But those planned acquisitions were before Legere took over and rolled up four straight years of industry-leading growth in both wireless customers and revenue. Now it’s Legere sees himself the driver’s seat.

And many in the industry agree.

“T-Mobile’s continued growth in the face of the industry’s struggles ensures that T-Mobile will be the belle of the M&A ball,” analyst Craig Moffett of MoffettNathanson wrote after the analyst call. “They are arguably the only company involved that can make a credible case that remaining independent is a viable option. Any negotiator worth their salt will say that the most important success factor in any negotiation is having the option of saying no and walking away. T-Mobile has that.”