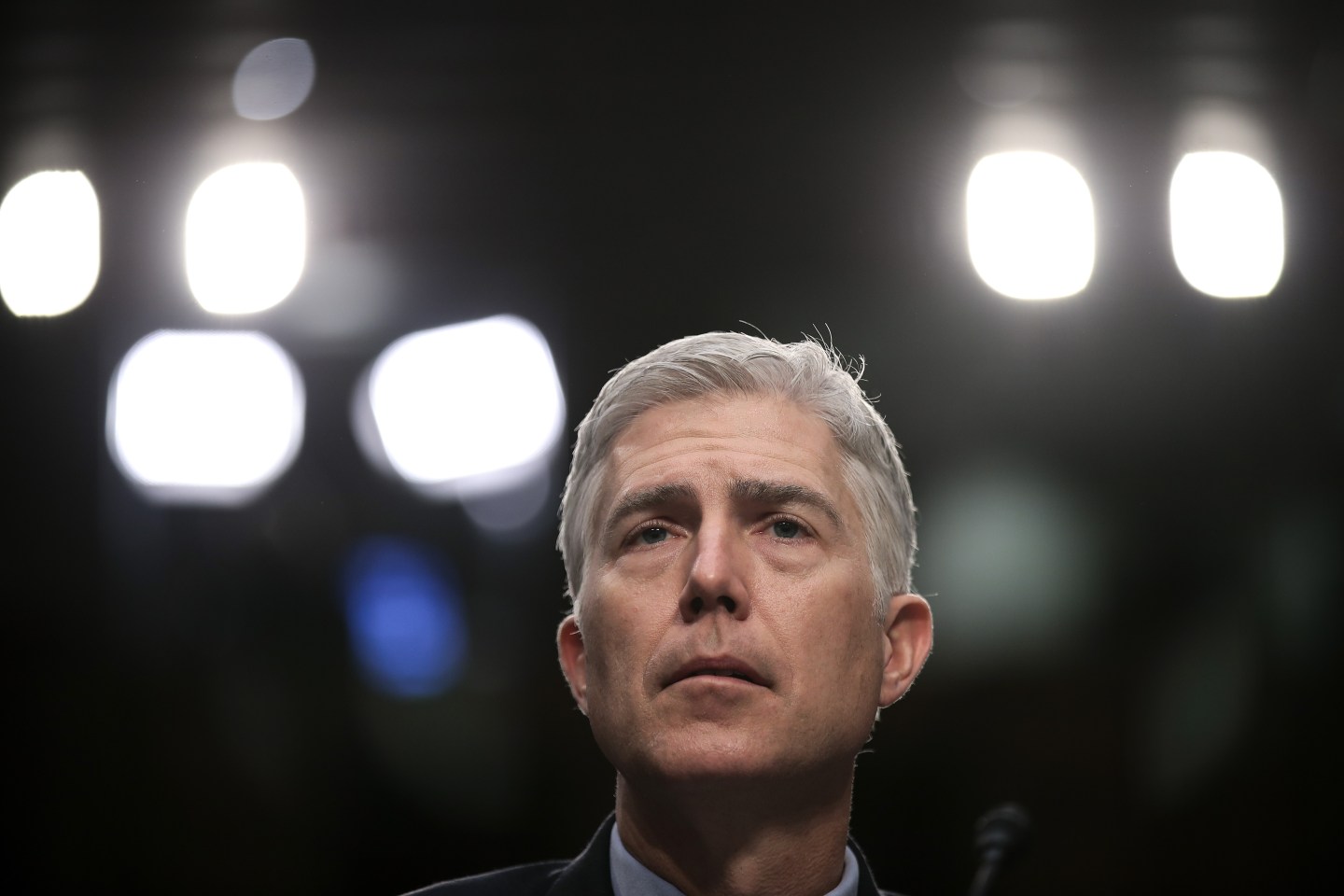 During Judge Gorsuch’s nomination hearing this week, senators pressed him on his views on issues relevant to President Trump’s ban on travel from six Muslim countries, which has thus far been blocked by courts. Gorsuch rightly declined to say what he thought about the pending litigation, which seems destined to come before the Supreme Court. When questioned on principles that might be relevant to the case, he replied in ways that seem facially reassuring, but avoided giving anything away – although his record as a Bush administration lawyer rings plenty of alarm bells.

Senator Patrick Leahy attempted to get at the nominee’s thoughts about the First Amendment’s religion clauses, which both forbid the government from preferring one faith over another and guarantee the right to freely practice one’s faith. Asked whether the First Amendment allowed a “religious litmus test,” Gorsuch replied that the issue was “currently being litigated” – obviously referring to the travel ban cases. An explicit religious litmus test would undoubtedly be unconstitutional and Gorsuch should have had no qualms about saying so. The issue being litigated is whether the travel ban is a religious test disguised as a national security measure. He was similarly cautious when asked whether the president could ban all Jews, simply referencing the constitutional guarantees of religious freedom and equal protection. Senator Leahy was able to get Gorsuch to concede that a religious test to serve in the military would be against the law, but not much more.

“No man is above the law,” Gorsuch declared in response to Senator Leahy’s query about whether the president’s national security determinations can be reviewed by the Supreme Court. Pressed on his willingness to stand up to Trump, Gorsuch explained that the hallmark of the rule of law was whether “the government can lose in its own court.”

It is hard to imagine a judicial nominee saying anything different. However, Gorsuch’s testimony gave little insight into how robustly he would review presidential decisions, a central issue in the Muslim ban lawsuits. When the first version of the ban came before the courts, Trump’s lawyers made a sweeping claim: not only was the president entitled to great deference in his national security judgments, his actions were “unreviewable.” It was easy enough for the court to smack down this argument, relying on a long line of cases in which the courts had reviewed, and even struck down, executive action on immigration and national security. When the next version of the ban was challenged, the administration made a narrower claim: that the president’s actions on immigration could only be reviewed to determine that they were “facially legitimate.” The president didn’t want the court looking at the motivation behind the order. That argument didn’t work either. Using the framework set out by the Supreme Court for cases challenging governmental expressions of religious preferences, the court looked at the context in which the order was issued finding “significant and unrebutted evidence of religious animus” towards Muslims and a “dearth of evidence indicating a national security purpose” and halted implementation.

In fact, we can glean greater insight into Gorsuch’s views on executive power from his record as a high-level political appointee in the Justice Department from 2005-2006 – a time when the Bush administration was advancing extremely broad claims of executive power to justify warrantless surveillance, torture, and Guantanamo. His involvement in crafting and defending these policies was disclosed in a number of documents relating to his tenure obtained by Senator Diane Feinstein. When questioned about his involvement in these matters, Gorsuch downplayed his role, suggesting that he was merely acting as a speechwriter. But today’s witnesses, many of of whom were central figures in the fights against these policies, detailed Gorsuch’s role in advancing them. Jameel Jaffer, who headed up the ACLU’s national security work during the time, raised an important point: “Judge Gorsuch appears not to have registered any disagreement with any of the policies he defended—though other officials did. Nor is there evidence that he registered discomfort with any of the broad arguments that the Justice Department advanced in support of those policies—though, again, others did.”

While it is difficult to read too much into Gorsuch’s fairly traditional and vague answers affirming courts’ role in serving as a check on the president and recognizing fundamental guarantees of religious freedom and due process, his work defending the worst of the Bush administration’s excesses raises serious questions about whether he would stand up to President Trump.

By Faiza Patel is co-director of the Liberty & National Security Program at the Brennan Center for Justice at NYU School of Law.