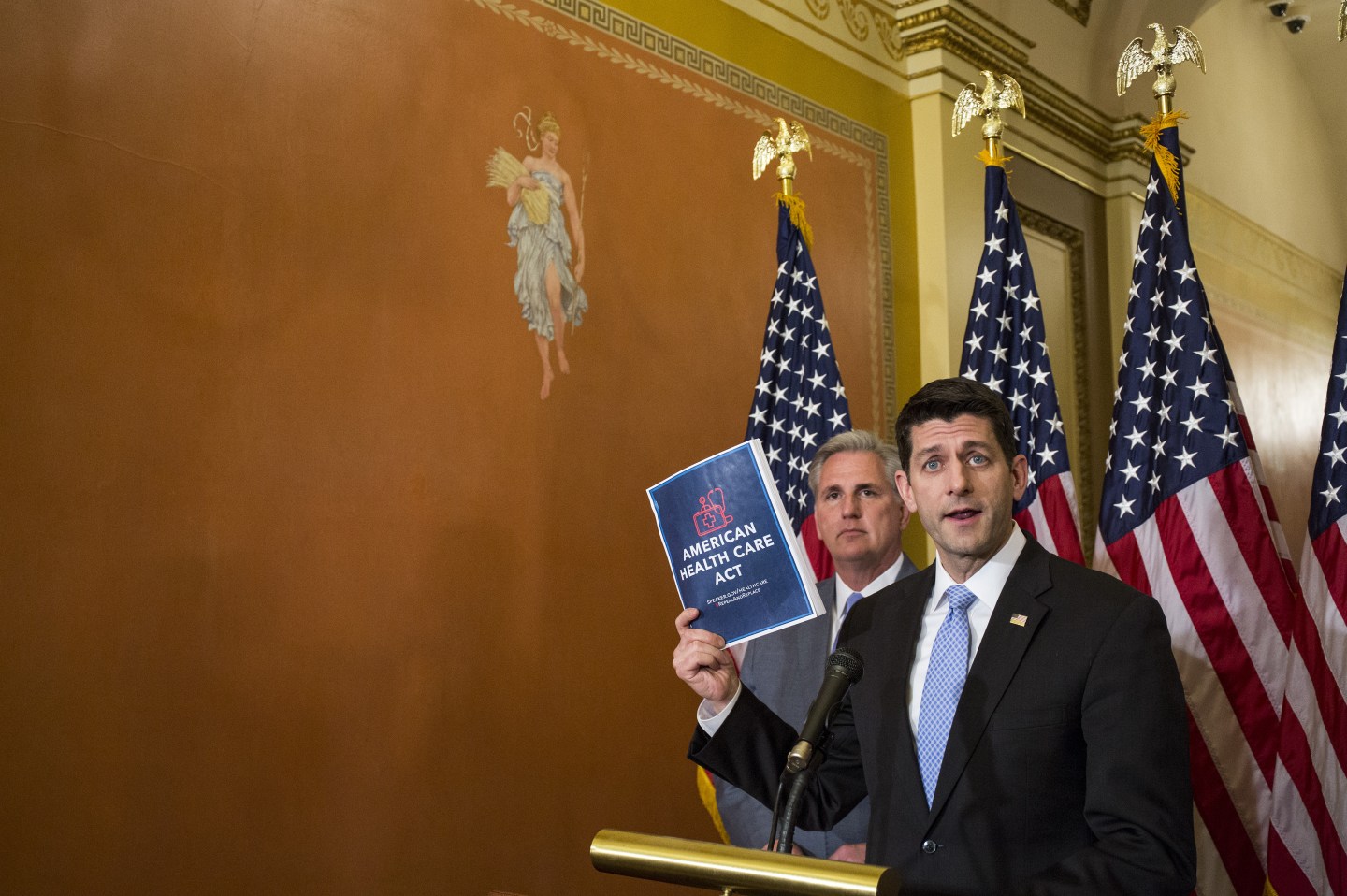 U.S. House Speaker Paul Ryan, a Republican from Wisconsin, center, holds up a copy of the American Health Care Act while speaking as House Majority Leader Kevin McCarthy, a Republican from California, left, listens during a news conference at the Capitol Building in Washington, D.C., U.S., on Tuesday, March 7, 2017. Ryan's new bill to replace Obamacare is being savaged by early bad reviews from a wide range of conservatives, with one Republican senator declaring it "dead on arrival" in the Senate -- if it can make it through the House. Photographer: Zach Gibson/Bloomberg via Getty Images
Photograph by Bloomberg via Getty Images

By 2026, 24 million fewer Americans would have health insurance under the House GOP’s Obamacare replacement that is currently working its way through Congress, according to a nonpartisan analysis of the legislation. And the number of insured Americans would drop by 14 million in 2018 alone while premiums would rise significantly over the next four years.

The report from the Congressional Budget Office (CBO), considered the official “scorekeeper” of Washington legislation, was already being dismissed by the White House before Monday’s report. The American Health Care Act (AHCA), which rolls back significant portions of Obamacare while keeping some of its more popular provisions, has been taking flak from lawmakers and advocacy groups from the left and right alike.

CBO’s analysis underscores the complex tradeoffs at the heart of health care reform. For instance, the group found that the Republican plan would also lead to more than $320 billion in savings to the federal budget, a major goal for conservatives. However, this is likely a consequence of widespread coverage losses and far less generous federal assistance to help Americans afford their health insurance premiums and out-of-pocket medical costs in exchange for massive tax cuts for the wealthy.

The coverage losses would stem from both the AHCA’s buzzsaw to Obamacare’s Medicaid expansion, which significantly boosted the number of poor working people with insurance, and an expected lapse in demand for private, individual health insurance due to the elimination of the individual mandate and higher costs (especially for older, poorer, and sicker Americans).

CBO also said that the country’s individual marketplace would not go into a death spiral either under Obamacare or the GOP’s replacement effort. The agency says that “average premiums for single policyholders in the [individual insurance] market would be 15 percent to 20 percent higher than under current law” in 2018 and 2019, but these steep hikes would begin to moderate in 2020 and beyond.

However, this is based in part on the assumption that the plan’s “high-risk” insurance pools for the sickest Americans are adequately funded and would therefore offset insurers’ high medical costs (these high risk programs have a noted history of being significantly underfunded).

The CBO also couldn’t issue projections on the Republican plans’ overall effect on the economy. “[B]ecause of the very short time available to prepare this cost estimate, quantifying and incorporating those macroeconomic effects have not been practicable,” wrote the agency.