Trump Hotel May Be Political Capital of Nation’s Capital 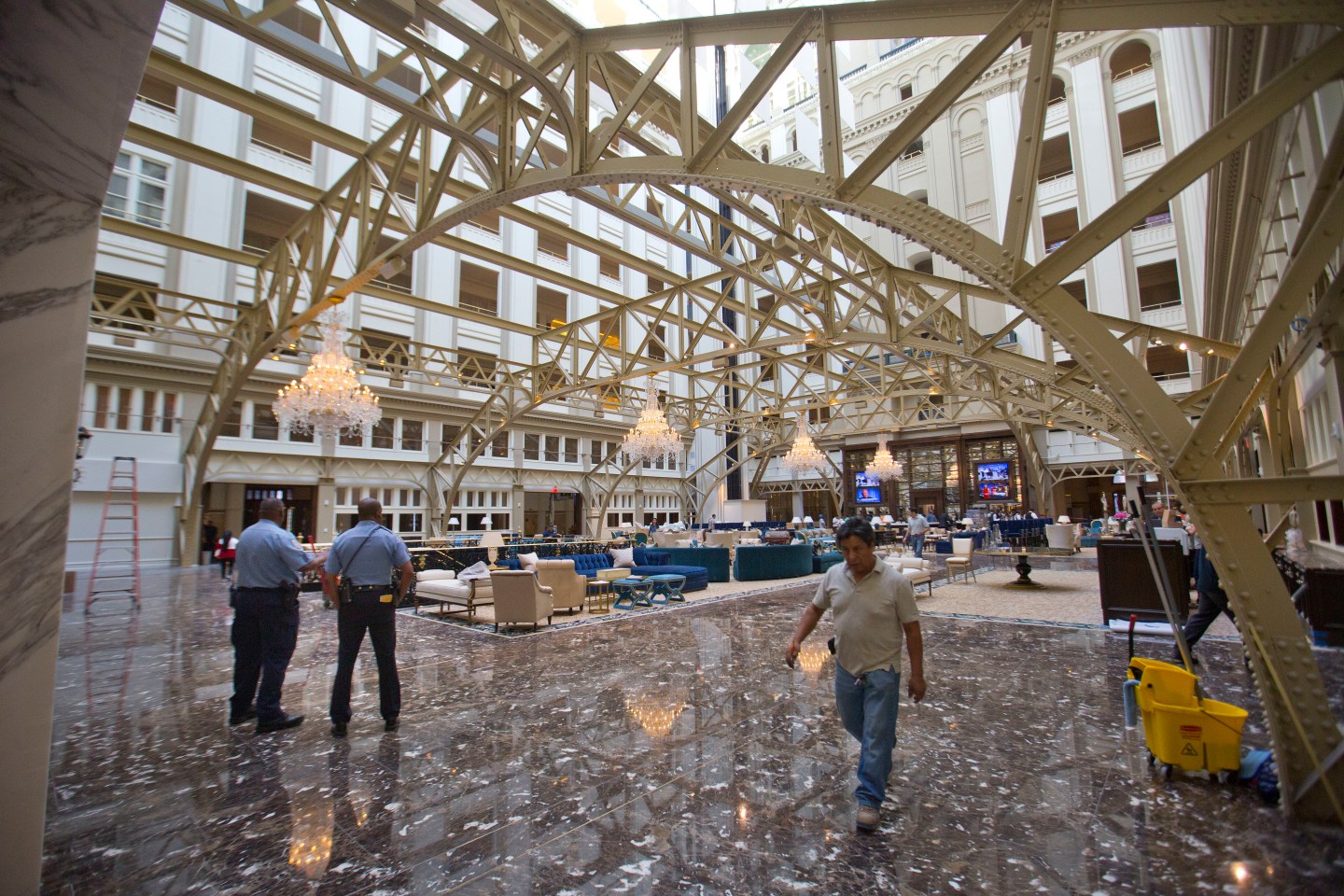 FILE - In this Sept. 12, 2016 file photo, the main lobby of the Trump International Hotel in downtown Washington. Trump's $200 million hotel inside the federally owned Old Post Office building has become the place to see, be seen, drink, network, even live, for the still-emerging Trump set. It's a rich environment for lobbyists and anyone hoping to rub elbows with Trump-related politicos, despite the veil of ethics questions that hangs overhead. (AP Photo/Pablo Martinez Monsivais, File)
Photograph by Pablo Martinez Monsivais—AP

At a circular booth in the middle of the Trump International Hotel’s balcony restaurant, President Donald Trump dined on his steak — well-done, with ketchup — while chatting up British Brexit politician Nigel Farage.

A few days later, major Republican donors Doug Deason and Doug Manchester, in town for the president’s address to Congress, sipped coffee at the hotel with Rep. Darrell Issa, R-Calif.

After Trump’s speech, Treasury Secretary Steven Mnuchin returned to his Washington residence — the hotel — and strode past the gigantic American flag in the soaring lobby. With his tiny terrier tucked under an arm, Mnuchin stepped into an elevator with reality TV star and hotel guest Dog the Bounty Hunter, who particularly enjoyed the Trump-stamped chocolates in his room.

It’s just another week at the new political capital of the nation’s capital.

The $200 million hotel inside the federally owned Old Post Office building has become the place to see, be seen, drink, network — even live — for the still-emerging Trump set. It’s a rich environment for lobbyists and anyone hoping to rub elbows with Trump-related politicos — despite a veil of ethics questions that hangs overhead.

“I’ve never come through this lobby and not seen someone I know,” says Deason, a Dallas-based fundraiser for Trump’s election campaign.

For Republican Party players, it’s the only place to stay.

“I can tell you this hotel will be the most successful hotel in Washington, D.C.,” says Manchester, adding that he would know because he has developed the second-largest Marriott and second-largest Hyatt in the world. Manchester says Trump’s hotel will attract people based on its location near the White House and Congress, the quality renovation and the management team.

Although Trump says he is not involved in the day-to-day operations of his businesses, he retains a financial interest in them. A stay at the hotel gives someone trying to win over Trump on a policy issue or political decision a potential chit.

That’s what concerns ethics lawyers who had wanted Trump to sell off his companies as previous presidents have done.

“President Trump is in effect inviting people and companies and countries to channel money to him through the hotel,” said Kathleen Clark, a former ethics lawyer for the District of Columbia and a law professor at Washington University in St. Louis.

She said the “pay to play” danger is even greater than it would be if people wanted to donate to a campaign to influence a politician’s thinking. Spending money at a Trump property “is about personally enriching Donald Trump, who happens to be the president of the United States.”

Trump can see his hotel from the White House. When a Fox News interviewer mentioned that to him recently, Trump responded, “Isn’t that beautiful?” But while the interviewer pointed out that he can see the property from his desk in the Oval Office, Trump said, “I’m so focused on what I’m doing here that I don’t even think about it.”

Still, Trump couldn’t resist the short trip over there for dinner on his only weekend night out in Washington since becoming president.

A reporter for the website Independent Journal Review was tipped off about Trump’s dining plans and sat at a table near him. He noted the president’s dinner fare and companions, who also included daughter Ivanka Trump and her husband, Trump adviser Jared Kushner.

On other nights, the posh hotel is the kind of place where on a mid-February evening, you could bump into Trump television personality Katrina Pierson having cocktails with Lynne Patton, a former Trump Organization executive who’s now working at the Department of Housing and Urban Development. Trump campaign and inauguration hands Tom Barrack, Boris Epshteyn, Nick Ayers and Rick Gates are among the many who have stayed there in recent weeks.

Rooms start at above $500 most nights, according to the hotel’s website and a receptionist. That’s up hundreds of dollars from when the hotel first opened, not long before Election Day. Patricia Tang, the hotel’s director of sales and marketing, declined to answer questions about how business is going.

The hotel has become a staging area for big political events.

Eric and Donald Trump Jr. posed for dozens of selfies with admirers at the hotel that bears their name before attending their father’s White House ceremony in late January to announce Judge Neil Gorsuch as the president’s pick for the Supreme Court.

Deason ran into the Trumps and fellow Texas donor Gentry Beach while at a meeting at the hotel that day with Trump’s campaign adviser Rudy Giuliani. During inauguration week, when Trump himself repeatedly visited, the hotel was “literally the center of the universe,” Deason said.

Last Tuesday, as Trump gave his first address to Congress, lobbyists and politicos watched the four large flat-screens above the bar, two tuned to Fox news and two to CNN. In what hotel staff said was an effort to avoid some of the obvious politics of the place, the TVs were muted, so people followed along on their own devices.

As Trump wrapped up, applause rose through the lobby and bar. Mnuchin waved to admirers gathered in the bar as he strolled through after Trump’s speech.

Mnuchin is one of the New Yorkers working in Washington who call it home during the week. White House economic adviser Gary Cohn is another. Linda McMahon, who heads the Small Business Administration, also has been staying there.

Billionaire Phil Ruffin, Trump’s partner for his Las Vegas residential tower, said he shelled out $18,000 per night while he was in town for the inauguration, which he said surprised him since he’d given $1 million to Trump’s inauguration committee. Ruffin says he lightly complained about the high rate to the president.

“He said, ‘Well, I’m kind of out of it.’ So I didn’t get anywhere, didn’t get my discount,” Ruffin recalled.

Trump’s continued ownership of his hotel and other businesses has spawned lawsuits and ethics complaints, but so far no action on any of them. One accommodation Trump says he is making on the ethics front is to donate profits from foreign governments that spend money at his hotels.

Last week, Kuwait’s ambassador, Salem Al-Sabah, and his wife hosted a reception in the hotel’s presidential ballroom, in what was one of the first known instances of foreign money changing hands with the hotel division of the Trump Organization since he became president. A spokeswoman for the Trump Organization did not respond to questions about whether the money from the Kuwait Embassy has been or will be donated.