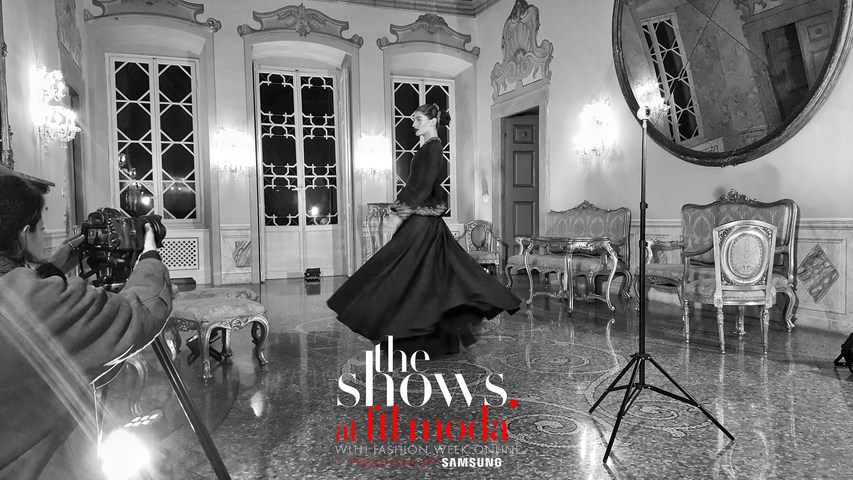 Fashion and tech are two industries that have danced around each other the last few years, but beyond the vague hybrid buzz term “fashion tech,” they’ve have had trouble finding a true love connection.

Tech appears to be more willing—or at least more ambitious—with some laudable strides with wearable technology as far as fitness trackers go. Fashion, however, has always seemed more reluctant. Sure, Google Glass made the runway at a Diane von Furstenberg show a few years back, but look how well that went.

Samsung—maybe not the first brand that comes to mind when thinking about high fashion—has had a low-key, but consistent presence at New York Fashion Week the last several seasons, usually as a sponsor with press lounges at the tents offering free extra battery juice (and sometimes some green juice) to smartphone-addicted journalists.

Apple (AAPL), the Korean tech giant’s most formidable foe worldwide, has made more of a vocal, flashy effort to court the fashion world, especially with the then-long anticipated unveiling of its Apple Watch in 2015. The iPhone maker made headlines alone for inviting more members of the New York-based fashion press than usual to what became the invite-only event of the spring season in San Francisco, followed by fête for the Instagram-set at self-described “brick-and-click” boutique Colette on Paris’s chicest street: Rue Saint-Honoré.

Yet sales for Apple Watch, and wearable tech overall, are still mixed. Thus, as far as appearances go, Samsung’s slow burn in fashion might finally be heating up.

It is Samsung (SSNLF) that is elevating its stature at New York Fashion Week this month, upgrading its fashion cred by toting in the most buzzed-about platform in tech these days: virtual reality.

“We think there’s a great opportunity for virtual reality in the fashion industry whether it’s a private fashion event like this one or taking that same experience to the everyday consumer,” says Minson Chen, a product manager for alliances and business development at Samsung Electronics America. “Using virtual reality also allows retailers and fashion professionals to collect data though [the Internet of things]. Designers really want to use information from the consumers and with VR we can capture this data, bring it back to the brand and ultimately help drive business.”

The electronics maker has teamed with FTL Moda, a fashion production firm that stages shows for New York Fashion Week, to produce what the two are touting as the first all-digital fashion presentation. Inspired by the theme titled “Dreaming of Italy,” the footage was shot in digital and 360-digital in Milan, Italy’s fashion capital, earlier this month.

Neha Singh, founder and CEO of Obsess VR, the startup behind the virtual reality software being used for show as well as building a VR shopping platform for fashion, says virtual reality will elevate the fashion industry to a level that’s not possible with other digital mediums today.

“With VR, we can create experiences that let anyone feel like they are sitting in the front row of a fashion show, or walk around and shop in a store anywhere in the world from your own couch,” Singh says.

Thus, instead of sitting alongside each other in cramped folding chairs dotting the sides of a traditional catwalk, attendees will be able to don Samsung’s Gear VR headset for an up-close, 360-degree view of the latest collections and corresponding details about each look. The event will include a museum-style backstage with digital video panels lining the walls as well as “Digital Mannequins” and mirror display technology showcasing the actual designer collections.

“The mirror display is really going be at the center of changing the retail experience for both the retailer and the customer,” says Ron Gazzola, vice president of marketing for visual display at Samsung. “The idea of developing digital display science for the fashion industry came about when we looked at the retail space. We knew developing a mirror display for fashion would be all about how to incorporate that experience.”

The virtual presentation will be hosted at an invite-only event (with the requisite fashion week after-party) on Tuesday at the Samsung 837 all-purpose gallery and flagship store in Manhattan’s Meatpacking District—a once-gritty neighborhood now home to luxe aspirational brands such as Tory Burch and Helmut Lang as well as a few lingering actual meatpacking plants.

There is also an Apple Store across the street.