How China’s Smartphone ‘Big Four’ Are Fighting for Global Customers 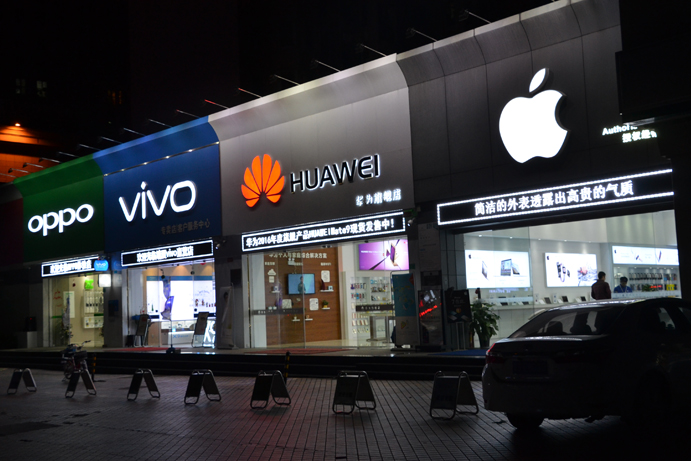 Worldwide, Apple (AAPL) and Samsung (SSNLF) dominate pricey smartphone sales, accounting for about a third of the market. But the next several names on the global bestseller list include four lower-cost Chinese competitors that collectively sell almost as many handsets as the big two.

In China’s smartphone market, the world’s largest, the four companies have been closely matched competitors over the last few years, taking turns at the number-one spot. (The figures in the chart below are from the third quarter of 2016, via research firm IDC.) Being No. 1 in China isn’t necessarily very profitable, however, as there are always new competitors willing to lose piles of money to build market share.

In recent years Huawei has broken out of the pack, becoming the No. 3 smartphone maker in the world and the first Chinese phone maker with a substantial global footprint. In a new feature article, Fortune shows how Huawei’s decades of experience making and selling telecom networking equipment helped it build better phones and establish relationships in markets worldwide—with the conspicuous exception of the U.S.—boosting its profile and its profit margins. Fortune looks at Huawei’s advantages and its obstacles to handicap its chances of catching Apple and Samsung globally.
Here’s a quick field guide to Huawei and its main Chinese competitors.

Oppo, owned by billionaire Duan Yong Ping, made its name selling cheaper phones in rural China (where it has 200,000 retail locations) and Southeast Asia. Its R9S looks like an exact copy of an iPhone 7—a winning formula in China.

Marketing for Oppo’s sister brand Vivo, also owned by Duan, focuses on its smartphones’ camera, a major selling point in selfie-obsessed China. Celebrity endorsements and its sponsorship of the NBA in China have propelled the brand.

The network-equipment giant sold an estimated $26.5 billion worth of phones in 2016, or 140 million handsets. It’s the only Chinese phonemaker whose devices are generally seen as being on par with Samsung’s in quality—which helps explain its strong recent growth in Europe.

For more on Huawei, read our feature “Can Huawei Catch Apple and Samsung?“

Xiaomi’s phones, all the rage in 2014, are falling out of favor almost as quickly as they became hits, hurt by mediocre reviews and a lack of retail distribution. The formerly online-sales-only company is making a big push to open retail stores.

A version of this article appears in the February 1, 2017 issue of Fortune as part of the feature titled “Is the World Big Enough for Huawei.”