Donald Trump Is Reportedly About to Name His Final Cabinet Pick 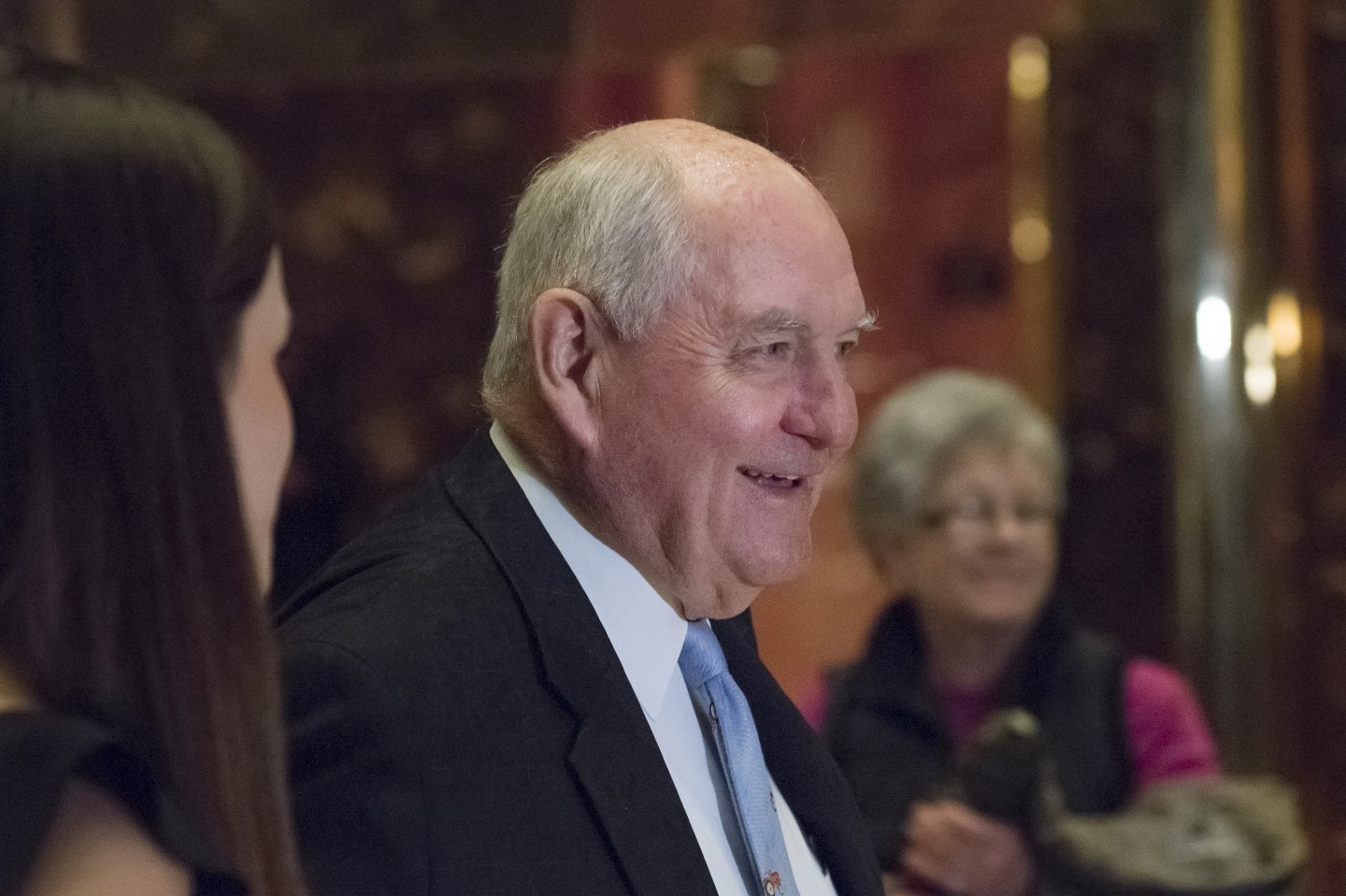 Sonny Perdue, former governor of Georgia, arrives at Trump Tower in New York, U.S., on Wednesday, Nov. 30, 2016. Trump said Wednesday he plans to leave his business "in total" to focus on the White House and will discuss the matter at a news conference Dec. 15 in New York with his children, some of whom are business associates. Photographer: Albin Lohr-Jones/Pool via Bloomberg
Albin Lohr-Jones/Pool via Bloomberg

President-elect Donald Trump intends to nominate former Georgia Gov. Sonny Perdue to serve as agriculture secretary, according to a person familiar with the decision but not authorized to speak publicly before it is announced.

Perdue, 70, would be the first Southerner to lead the Agriculture Department in more than two decades. He comes from the small city of Bonaire in rural central Georgia, where he built businesses in grain trading and trucking.

The agriculture secretary job is the last Cabinet position for which Trump hasn’t named a candidate.

Perdue is not related to or affiliated with the food company Perdue or Perdue Farms, the well-known poultry producer.

Agriculture secretaries are often from the Midwest, where corn and soybeans dominate the markets. U.S. farm policy has long been favorable to those crops, and congressional battles over massive farm bills every five years often divide along regional lines. Southerners have pushed for subsidy programs that are more favorable to rice and cotton, which can be more expensive to grow.

The last three agriculture secretaries were from Iowa, North Dakota and Nebraska.

Nebraska Sen. Ben Sasse said Thursday in a statement that he wants to talk to Perdue about “the unique interests of Midwest agriculture,” including trade and regulatory burdens.

“Nebraskans feed the world and our agriculture secretary needs to understand what we bring to the table,” Sasse said.

Many farm-state lawmakers and agriculture groups grew concerned as Trump approached his inauguration without having named an agriculture secretary candidate. Earlier Thursday, Iowa Sen. Charles Grassley tweeted that he was frustrated with the process.

Perdue began his political career as a Democrat in Georgia’s state Legislature in the 1990s. But it was after switching his allegiance to the Republican Party that Perdue made history.

In 2002, Perdue was elected the state’s first Republican governor since the end of Reconstruction more than 130 years earlier. Perdue’s victory over an incumbent Democrat completed Georgia’s shift to a solidly Republican state, ending generations of Democratic control of state government.

Despite the seismic political change, Perdue showed little interest in pushing big programs or signature legislation during his two terms. Instead he focused on finding ways to save money while improving customer service by state agencies — such as reducing wait times for renewing driver’s licenses. He often referred to himself as Georgia’s CEO.

“If I could choose my legacy it would be the epithet that he made government work,” Perdue told The Associated Press in 2010 before he left office. “That’s really what I’ve focused on. It’s not some big monument.”

Critics accused Perdue of failing to tackle some of Georgia’s biggest problems, such as struggling public schools.

Perdue didn’t rely only on his business acumen as governor. A devout Southern Baptist, he also found a place for faith in his administration. In 2007, when a withering drought gripped Georgia and neighboring states, Perdue held a prayer rally in front of the state Capitol in Atlanta to pray publicly for rain.

It was also Perdue who brought an end to Georgia’s longstanding conflicts over a state flag that featured the Confederate battle emblem. The controversial flag was replaced by lawmakers under Perdue’s Democratic predecessor, but the new design proved unpopular. Perdue insisted Georgia voters should pick the flag. A referendum was held in 2004, though Southern heritage groups were outraged that the options did not include the old flag with the Confederate symbol.

Under Perdue’s watch, Georgia adopted tough new food-safety regulations after a deadly U.S. salmonella outbreak was traced to Georgia-made peanut butter. He moved the state office that issues water permits for irrigation and other agricultural uses from Atlanta to rural south Georgia, where it would be closer to farmers. And Perdue poured millions of state dollars into Go Fish, a program that aimed to lure bass fishing tournaments to the state.

The ex-governor, whose full name is George Ervin Perdue III, grew up in central Georgia. He attended the University of Georgia, where he played football as a walk-on and earned his doctorate in veterinary medicine. Following a stint in the Air Force, Perdue returned to Georgia and settled in Bonaire, a city of about 14,000 people.

Perdue already has family serving in Washington. His cousin, former Dollar General CEO David Perdue of Sea Island, Georgia, was elected to the U.S. Senate in 2014.