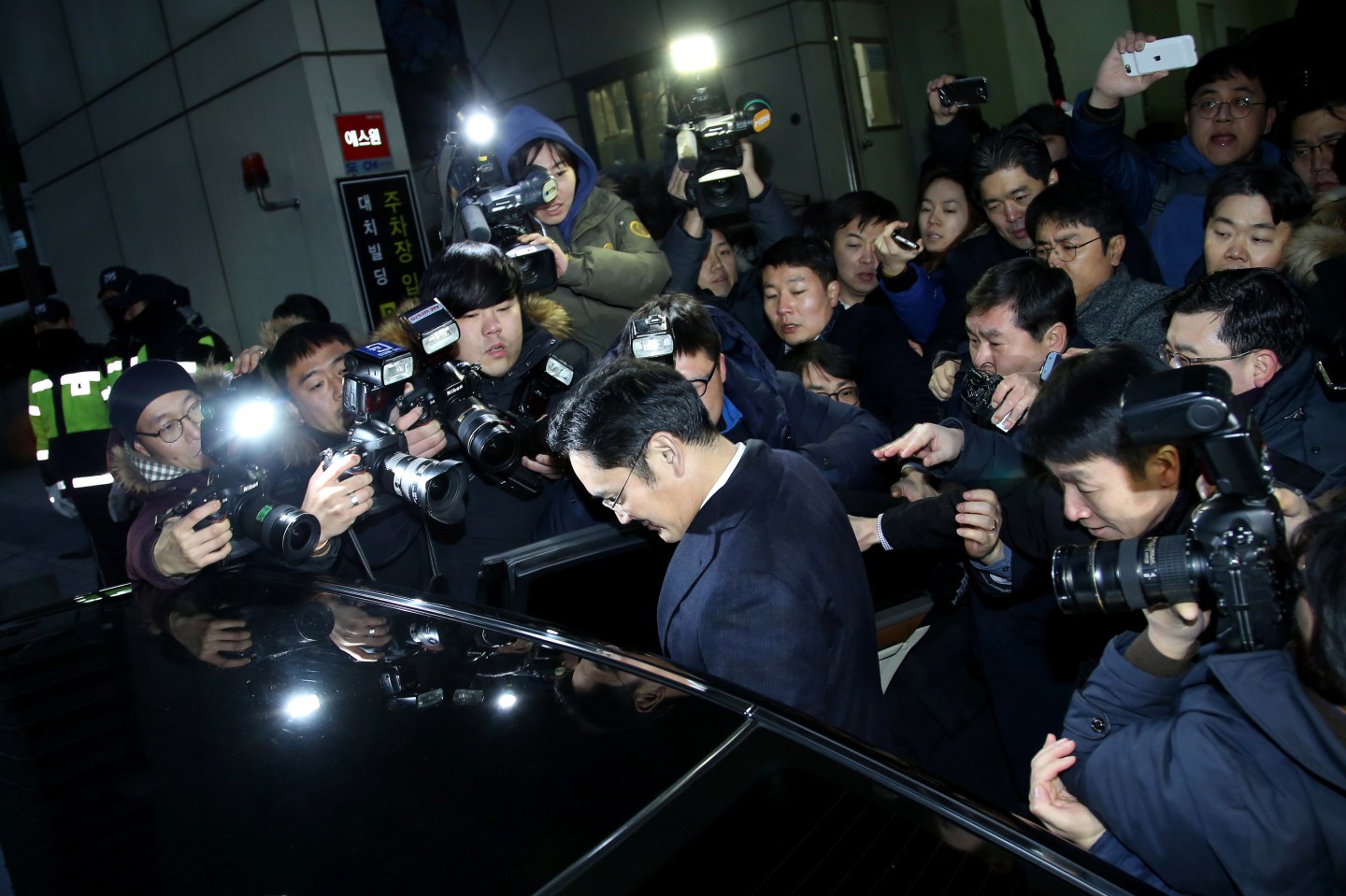 Jay Y. Lee, co-vice chairman of Samsung Electronics Co., center, is surrounded by members of the media as he enters his vehicle while leaving the special prosecutors' office in Seoul, South Korea, on Friday, Jan. 13, 2017. Special prosecutors began questioning Lee on Thursday as a suspect in a bribery investigation, deepening an influence-peddling scandal that has already led to the impeachment of South Korea's president. Photographer: SeongJoon Cho/Bloomberg via Getty Images
SeongJoon Cho/Bloomberg via Getty Images

Jay Y. Lee, who heads South Korea’s massive Samsung Group, was given a $5 box meal for lunch and did not sleep in over 22 hours of questioning in a corruption scandal involving impeached President Park Geun-hye.

Lee, who has a net worth of $6.2 billion and is the third-generation leader of the country’s biggest conglomerate, or “chaebol,” left the special prosecutors’ office in southern Seoul on Friday morning in what appeared to be the same suit and tie he’d worn when he entered a day earlier.

The tall, bespectacled 48-year old did not look visibly affected by the session, in which he was questioned by two prosecutors, including one nicknamed the “Chaebol Sniper.”

Lee did not speak to reporters before getting into a waiting car.

“Two prosecutors interrogated him and they came in and out of the room to report to their chief,” a prosecution official told Reuters.

“None of them – prosecutors or Jay Lee – slept before the questioning was over,” the official said.

The official, who declined to be named due to the sensitivity of the matter, said Lee’s lawyer was present during the questioning.

Prosecutors have been investigating whether Samsung provided 30 billion won ($25.46 million) to a business and foundations backed by the president’s friend Choi Soon-sil in exchange for the national pension fund’s support for a 2015 merger of two Samsung affiliates.

Lee was named as a suspect on Wednesday and summoned for questioning on Thursday morning. He became the de facto head of the Samsung Group after his father Lee Kun-Hee was incapacitated by a heart attack in 2014.

Samsung has acknowledged making payments to two foundations at the center of the scandal, as well as to a consulting firm controlled by Choi, but has repeatedly denied accusations of lobbying to push through the merger of Samsung C&T and Cheil Industries Inc.

Park was impeached by parliament in December, a decision that must be upheld or overturned by the Constitutional Court. Park, who has been stripped of her powers in the meantime, has denied wrongdoing.

Choi, who is in detention as she undergoes trial, has also denied wrongdoing.

One of the two prosecutors grilling Lee was Han Dong-hoon, the prosecutors’ office said.

Han has been nicknamed the “Chaebol Sniper” by local media for his record in previous high-profile corporate investigations, including a 2003 case involving the SK Group and another in 2006 focused on Hyundai Motor (HYMTF).

After a box meal for lunch, Lee ate jajangmyeon, a Chinese black-bean-paste noodle popular as a cheap meal, for dinner, according to the special prosecutor’s team.

Local media reports said Lee was questioned in a room known as the “digital recording interrogation room” in the office that was set up specially to investigate the presidential corruption scandal.

The special prosecution official could not confirm to Reuters in which room Lee was questioned.

The digital recording interrogation room, shown previously to reporters, has one table and about six chairs and is equipped with a closed-circuit television camera as well as a desktop computer and printer. An air purifier stands in the corner.

The room has a one-way mirror through which proceedings can be seen unobserved from a neighboring room.

Lee will not be summoned for questioning again, a spokesman for the special prosecutors’ office said. But he said prosecutors will decide soon whether to arrest him.

Lee had denied some of the suspicions against him but had admitted to others, the spokesman said. He declined to elaborate.