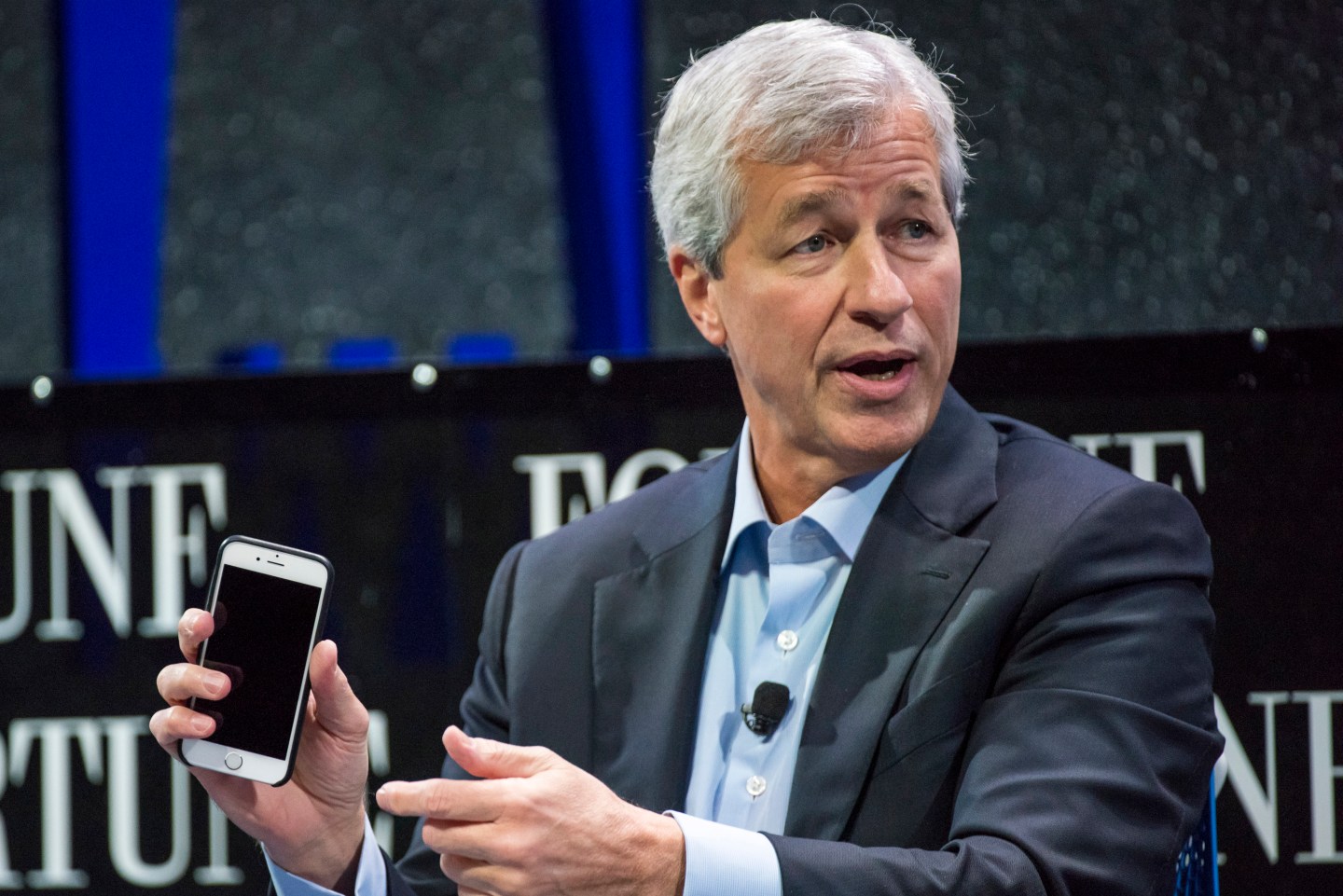 Jamie Dimon, chief executive officer of JPMorgan Chase & Co., holds an Apple Inc. iPhone smartphone as he speaks during the 2015 Fortune Global Forum in San Francisco, California, U.S., on Wednesday, Nov. 4, 2015. The forum gathers Global 500 CEO's and innovators, builders, and technologists from some of the most dynamic, emerging companies all over the world to facilitate relationship building at the highest levels. Photographer: David Paul Morris/Bloomberg via Getty Images
David Paul Morris—Bloomberg via Getty Images

Jamie Dimon thinks it’s not just the market that is up. The economy’s momentum is building as well.

In announcing that J.P. Morgan Chase’s profits had jumped 30% in the fourth quarter of 2016, the bank’s CEO Dimon opined in a statement Friday morning, “The U.S. economy may be building momentum.” But on a conference call with analysts shortly after, Dimon was pushed to describe exactly what he was seeing that had led to his recent optimism. Markets have been rising since Donald Trump won the presidency. But there has been some concern that while stock prices have been going up, the actual economy is not really all that much better.

Dimon disagreed. He named a number of factors, including improving capital investment from business and retail spending from consumers, that he said suggested the economy is continuing to expand — and not, after eight years of recovering from the financial crisis, starting to slip toward another recession.

“Looks like the economy is getting stronger to me,” Dimon said. “But that’s my own perception.”

Of course, as the head of the world’s largest bank, Dimon’s perception is a pretty good one to, well, bank on. J.P. Morgan’s CFO Marianne Lake said that the bank’s clients have grown more optimistic about the economy since the election.

Dimon, who has been named to a CEO advisory forum by President-elect Donald Trump, said he thinks Trump will pass a mixture of regulatory reform and tax relief that will boost the economy. Dimon, though, said there is a lot to get done, and he’s not pushing the President-elect toward banking reform or any one priority.

Dimon added that he does believe Trump will lower corporate taxes, and likely in 2017, but not right away. “I’m not expecting anything for nine to 12 months,” Dimon said. “What we need is growth that will make everyone better off. And that’s what the CEOs and I are pushing for [with Trump].”