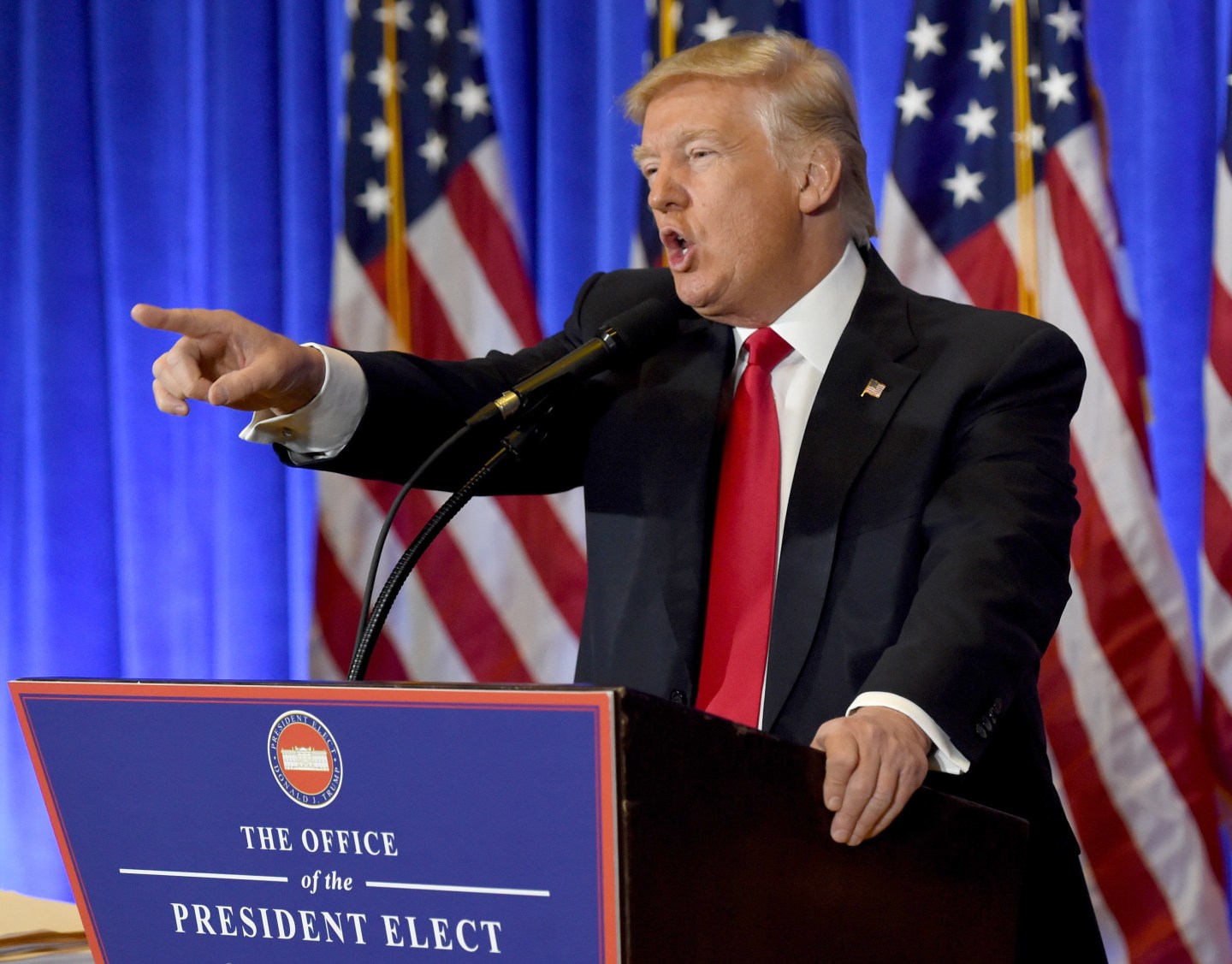 In courtroom TV dramas, when a witness is testifying and starts to lie or refuses to answer, the lawyer asking the questions will often ask the judge for “permission to treat the witness as hostile.” At that point, the gloves come off, and the attorney starts to ask pointed questions, and then usually gets the witness to confess to the murder, or whatever the crime is.

That’s the way things work in the movies. It’s not always so simple in the real world, with all of its shades of grey. But there’s an argument to be made that the media needs to treat President-elect Donald Trump as a hostile witness. He and the press are not on the same page—they’re not even reading the same book. And that isn’t likely to change. If anything, it will probably get worse.

If you want a picture of what the next four years might look like, take a look at what happened during Trump’s first press conference in six months, held at Trump Tower in New York on Wednesday. According to several of those who were in attendance, the number of Trump loyalists and staffers—who clapped after almost every statement the president-elect made—outnumbered members of the actual press.

Before the conference, CNN reported on the existence of a document that was included in a high-level intelligence briefing given to Trump and President Obama, a document that contained allegations about back-room deals between Russia and the president-elect, and reports of sexual activity. After the CNN report, which didn’t go into the details, BuzzFeed published the entire document.

Trump’s anger at the CNN and BuzzFeed reports was obvious on Twitter—where all of the president-elect’s emotions are on full display— and that carried over to the press conference. When Jim Acosta of CNN repeatedly tried to ask a question, Trump shouted him down and said: “Your network is terrible. You are fake news.” Trump also described BuzzFeed as a “failing pile of garbage.”

After the news conference, Trump’s spokesman and soon-to-be press secretary Sean Spicer went up to Acosta and accused him of being rude, and said that if he tried the same approach again, he would be removed and would not be allowed to ask questions.

This isn’t the first time Trump has taken this kind of confrontational approach to the media. During the election campaign, he shouted down Univision anchor and veteran reporter Jorge Ramos when he tried to ask a question, and then had his security staff physically remove Ramos from the room (the Univision journalist was later allowed back in, but never got a response to his question).

Media organizations could respond to this kind of behavior in a few different ways. One is to apologize and try to curry favor with Trump and his staff so as to be called on during press briefings, be invited to off-the-record meetings, and get invitations to parties at Mar-a-Lago.

CNN, for its part, went to a considerable amount of effort following the news conference to differentiate itself from BuzzFeed—in the same way a child facing punishment will try to shift blame to his or her siblings. And a number of other media outlets continued to ask questions during the press conference, rather than showing any kind of support or solidarity for either CNN or BuzzFeed (although Fox News’ Shep Smith) stood up for CNN after the fact).

Trump essentially blackballed CNN today. We should expect more of this, and be ready to respond. https://t.co/cd6OBalyzI pic.twitter.com/2aqGdNsD20

The media game being what it is—a hotly competitive business that is under increasing financial pressure—it’s natural for reporters in such an environment to look out for themselves, and throw whomever they can find to the wolves, if that’s what it takes.

That kind of strategy, however, only plays into the hands of someone like Trump, a man who has talked publicly about loosening libel laws so he could more easily sue news outlets like the New York Times, and who repeatedly banned news organizations from his campaign if he didn’t like the stories they wrote. He will almost certainly play favorites with certain outlets when it suits him, and cut them off at the knees when it doesn’t.

A Russian journalist wrote recently about how Trump’s press briefing reminded him of the annual press conferences that President Vladimir Putin holds, which have a kind of circus-like atmosphere and elicit virtually no useful information. As Alexey Kovalev put it in his post, “It’s in this man’s best interests to pit you against each other, fighting over artificial scarcities like room space, mic time or, of course, his attention.”

A policy of accommodation or détente may be tempting for media outlets that feel they have already lost the trust of a large portion of Trump voters. They might feel as though being actively hostile—or referring to his false statements as lies—isn’t the best approach, because it will only increase the hatred that Trump supporters feel for the media.

But that battle is all but lost. And normalizing Trump’s behavior or treating him with kid gloves isn’t going to make all of those Trump voters sign up for New York Times or CNN subscriptions all of a sudden. It will only give him even more license to continue to treat the media as a punching bag and then go about his business doing whatever he feels like doing. If the president wants a fight, then he should get one.