Who is Jorge Ramos and why is Donald Trump so mad at him? 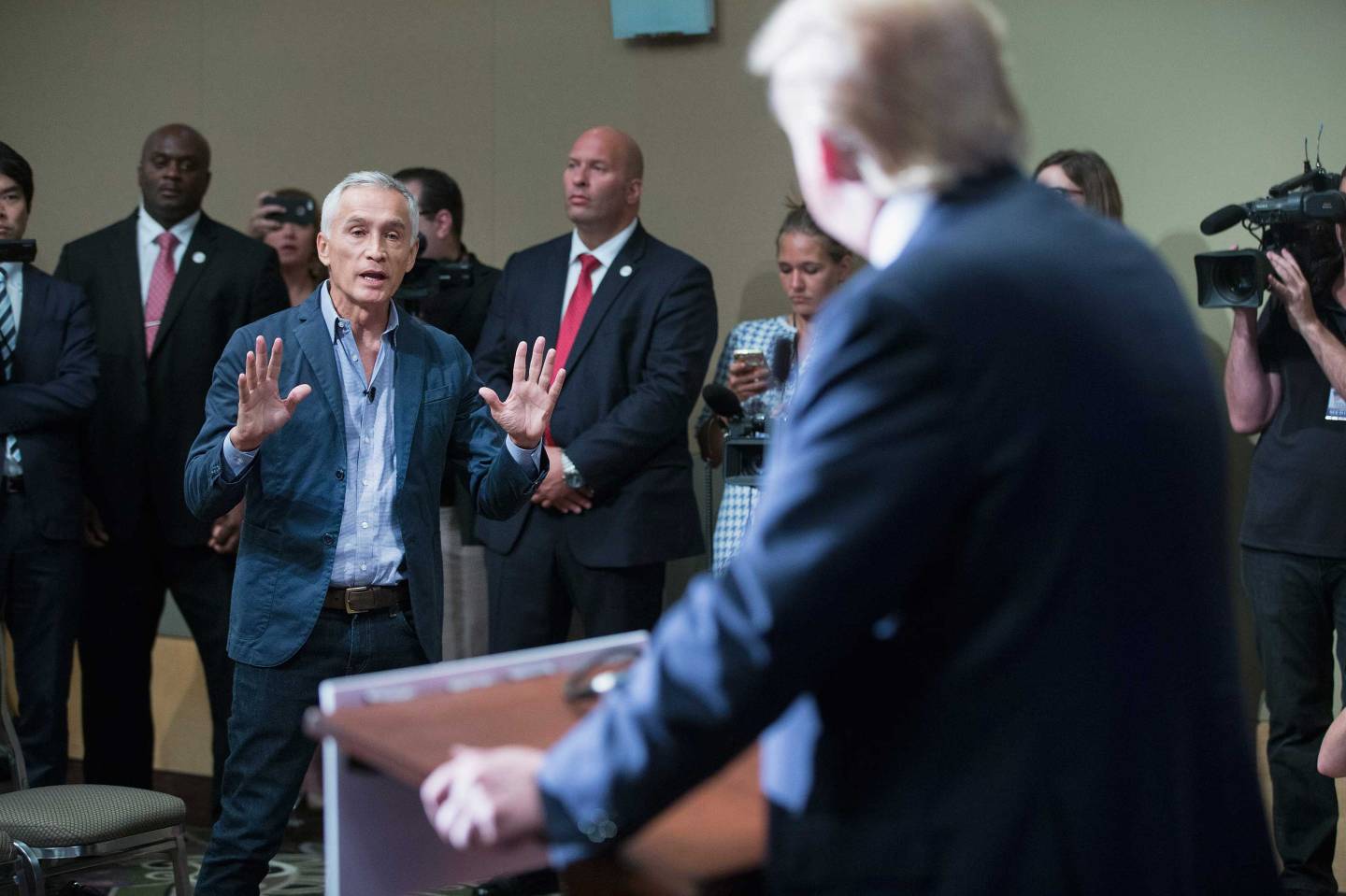 DUBUQUE, IA - AUGUST 25: Republican presidential candidate Donald Trump fields a question from Univision and Fusion anchor Jorge Ramos during a press conference held before his campaign event at the Grand River Center on August 25, 2015 in Dubuque, Iowa. Earlier in the press conference Trump had Ramos removed from the room when he failed to yield when Trump wanted to take a question from a different reporter. Trump leads most polls in the race for the Republican presidential nomination. (Photo by Scott Olson/Getty Images)
Photograph by Scott Olson — Getty Images

Republican presidential hopeful Donald Trump and his followers may think that Jorge Ramos is just another loudmouth reporter trying to derail their campaign. But for millions of Hispanic viewers, the Univision anchor is the equivalent of a modern-day Tom Brokaw or Walter Cronkite: A trusted source of news and opinion, and quite possibly the most influential Spanish-speaking journalist in the world.

During a news conference on Tuesday in Iowa, Ramos shouted a question at Trump about his views on immigration, at which point the candidate’s security detail hustled the journalist out of the room, as Trump told him to “Go back to Univision.” He was subsequently allowed back into the room and continued to question Trump about his position.

Born and raised in Mexico, Ramos is the co-anchor for a top-rated news program on Univision called Noticiero Univision and the host of a Sunday morning political-news program on the Spanish-language network called Al Punto. He also hosts an English-language program called America with Jorge Ramos, which is broadcast on Fusion, a channel that is co-owned by Univision and Disney/ABC.

The Univision anchor’s influence is difficult to compare to that of other mainstream journalists, in part because Univision’s reach within the Hispanic market is unlike anything in the English-speaking media world. The network reaches 97% of Hispanic households in the U.S., according to Forbes, and its daily news program Noticiero pulls in an average 1.9 million viewers. There are an estimated 25 million eligible Hispanic voters in the U.S.

On an average evening, about 65% of all Spanish-language TV viewers are watching Univision, and it routinely out-performs much larger English networks such as ABC and CBS in certain markets such as Los Angeles. “Based on our research, there are two institutions in the Latino immigrant community that rank as highly trustworthy,” Simon Rosenberg of the New Democrat Network told Washington Monthly. “They are the Catholic Church and Univision.”

Donald Trump has a history with Univision that goes beyond just his heated response to Ramos’s questions in Iowa: The billionaire reality-TV star is suing the network for $500 million for dropping his Miss USA pageant, which it did after Trump made some offensive remarks about Mexican immigrants.

Ramos, who is 57, got his start on a 60 Minutes-style news program at Grupo Televisa’s flagship XEW-TV channel in Mexico City, but later quit his job after a story he worked on that was critical of Mexico’s government was censored by the station. He then moved to Los Angeles and worked for the local affiliate of the Spanish International Network, which later became Univision.

I'm a reporter. My job is to ask questions. What's "totally out of line" is to eject a reporter from a press conference for asking questions

Ramos has been an anchor on the network’s Noticiero news program since 1986, and has interviewed multiple U.S. presidents and foreign dignitaries, and reported on everything from the fall of the Berlin Wall to the war in Afghanistan. He has won eight Emmys for his TV journalism and has written eleven books, including one called “A Country for All: An Immigrant Manifesto.”

Although Ramos may have as large a following as Cronkite or Brokaw, the Univision journalist is unlike them in one way: He is not afraid to express his opinion, and to take a stand on issues that affect his viewership, particularly the U.S. government’s approach to immigration and its treatment of Hispanic citizens. He has confronted politicians like Ted Cruz, as well as and right-wing commentators such as Ann Coulter on his program, and has criticized Trump for his views.

Ramos was named one of Time magazine’s 100 most influential people earlier this year, and in her short profile of him, CNN correspondent Christiane Amanpour wrote:

“Jorge Ramos is silver-haired and gray-eyed, but inside that ring of steel beats a heart of gold. Ramos wrangles with President Obama and House Speaker John Boehner; he swims the Rio Grande; he says he asks every question as if it’s his last, determined to get an answer or go down trying. What happened to immigration reform? He knows he has a voice and is not afraid to use it. He shouts from every rooftop that Hispanic rights are human rights.”

Matthew Dowd, a campaign adviser for George W. Bush, told the New York Times earlier this year that Ramos has become as influential among Hispanic voters as Cronkite ever was for middle-class white Americans. “He is not only a journalist, he’s become the voice of the Latino constituency,” Mr. Dowd said. “And that’s where Republicans have to worry — you don’t want to lose Jorge Ramos.”