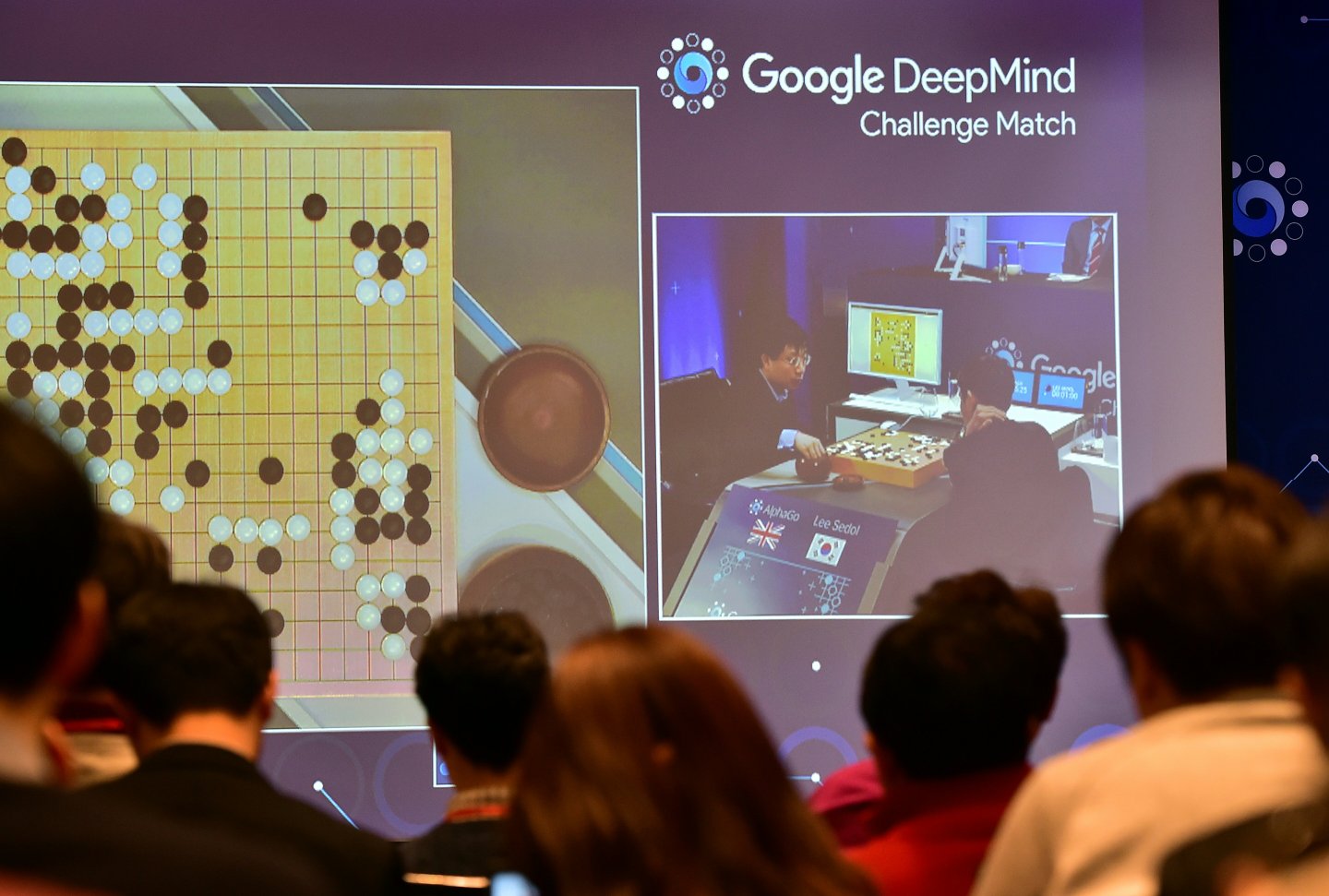 Journalists watch a big screen showing live footage of the third game of the Google DeepMind Challenge Match between Lee Se-Dol, one of the greatest modern players of the ancient board game Go, and the Google-developed supercomputer AlphaGo at a hotel in Seoul on March 12, 2016. A Google-developed computer programme took an unassailable 3-0 lead in its match-up with a South Korean Go grandmaster on March 12 -- marking a major breakthrough for a new style of "intuitive" artificial intelligence (AI). / AFP / JUNG Yeon-Je (Photo credit should read JUNG YEON-JE/AFP/Getty Images)
Photograph by Jung Yeon-Je—AFP/Getty Images

In a series of unofficial online games, an updated version of Google’s AlphaGo artificial intelligence has compiled a 60-0 record against some of the game’s premier players. Among the defeated, according to the Wall Street Journal, were China’s Ke Jie, reigning world Go champion.

The run follows AlphaGo’s defeat of South Korea’s Lee Se-dol in March of 2016, in a more official setting and using a previous version of the program.

The games were played by the computer through online accounts dubbed Magister and Master—names that proved prophetic. As described by the Journal, the AI’s strategies were unconventional and unpredictable, including moves that only revealed their full implications many turns later. That pushed its human opponents into deep reflections that mirror the broader questions posed by computer intelligence.

“AlphaGo has completely subverted the control and judgment of us Go players,” wrote Gu Li, a grandmaster defeated by the program, in an online post. “When you find your previous awareness, cognition and choices are all wrong, will you keep going along the wrong path or reject yourself?”

Another Go player, Ali Jabarin, described running into Ke Jie after he had been defeated by the program. According to Jabarin, Jie was “a bit shocked . . . just repeating ‘it’s too strong’.”

For more on AI, watch our video.

Predictably, the official statement from developers DeepMind is less angsty, emphasizing the potential for AI to “explore the profound mysteries of the game further in this spirit of mutual enlightenment”—and promising that AlphaGo will take its next-level game to more official venues soon.

How Computers Made Humans Better at Chess

That optimism might not resonate with the Go players’ real-economy counterparts—for instance, the group of Japanese insurance workers supplanted by an artificial intelligence this week.

What industrial robots have been to factory jobs, it seems, decision-making programs are becoming for white-collar workers. And though AlphaGo has mastered a game, the machine learning techniques behind its development will help build AIs to solve ever more complex real-world problems—and take ever more human jobs.