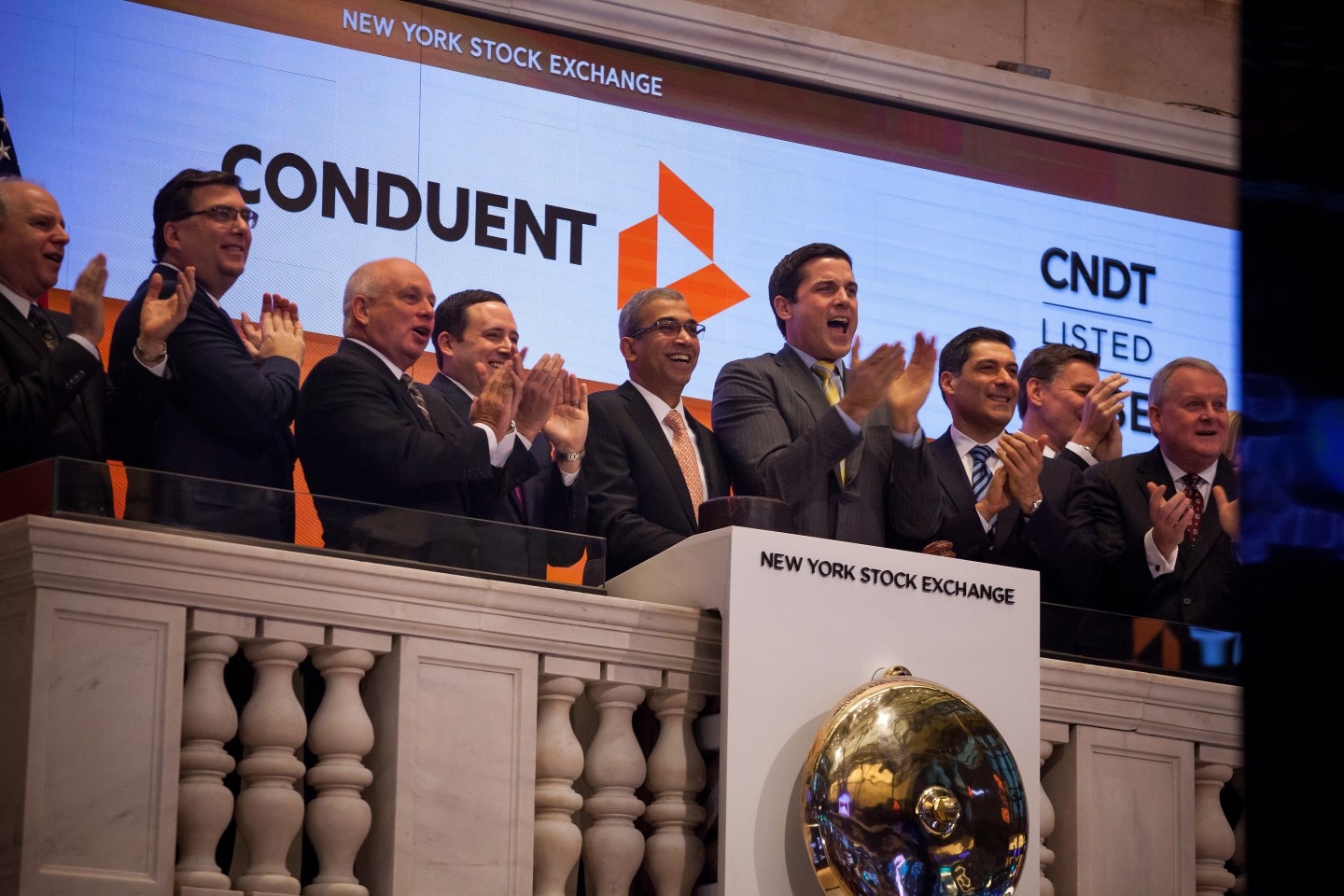 Xerox’s sibling business services unit, Conduent, spun off into a separate company on Tuesday. It must now find a way to lift its growth amid stagnant sales and a tough market.

Xerox acquired the roots of Conduent, which handles everything from human resources services for healthcare companies to mobile parking apps for the city of Los Angeles, by buying Affiliated Computer Services for nearly $6.4 billion in 2010. The deal was supposed to help Xerox find another source of revenue beyond it’s core copier and printing business.

But like other big business tech companies like IBM and Hewlett Packard Enterprise, Xerox’s overall revenue has declined in recent years. With few people printing and copying, Xerox’s annual sales have dropped each year since 2011.

During much of that time, Xerox’s business services group struggled. In a nine-month period ending in September, Conduent had $4.9 billion in revenue, or nearly flat compared to the previous year.

Xerox’s executives say that two smaller, more nimble businesses will be able to better adapt to a rapidly changing technology world. The argument echoes that of Hewlett Packard, which split into two companies last year.

But Wall Street didn’t exactly give Conduent a happy birthday. In its first day of trading, the company’s shares fell 8% to $13.72.

In this edited interview with Fortune, Conduent CEO Ashok Vemuri talks about splitting from Xerox (XRX), competing with IBM (IBM) and HPE (HPE), and new beginnings.

Fortune: Tell me about splitting from Xerox.

Vemuri: If you go back six to seven years when Xerox acquired a company called ACS [Affiliated Computer Services] in 2010, the thesis of that acquisition was that Xerox was a hardware manufacturing company. This was during a recession, and management thought the best would be to serve your clients soup-to-nuts, if you will, by acquiring a services company.

Why did hardware companies think that they also had to have business services?

It was the height of the recession. This was considered a sort of natural hedge in terms of buying revenue. Secondly, it was believed that if you sold a piece of equipment to a client, they were servicing that equipment with somebody else. So why would I not, if I sold you that equipment, service it instead? Thirdly, services companies were on the ascendancy. Remember, even 10 years ago, print, paper, ink was on decline, and it continues to be so. The services business is where the margins are—where the cash flow is—and your need for spending is much less. If you look at an equipment provider like Xerox, it’s more a finance operating lease company, because they fund your purchase of a printer. A services business is asset light. It does not require you to invest your balance sheet in a big way.

Some analysts believe the downside of a service company, however, are the costs of hiring employees, which can eat into profitability.

That’s wrong. That is the conventional way of thinking about services businesses. In our model, 80% of our business is transactions based. We do everything off the back of technology. That allows me to add a multitude of services off a particular platform. Let me give you an example. If I have three or four clients, I cannot repurpose my people because they aren’t fungible. I can’t say, “Hey, for two hours you be on the call center, for two hours you do transaction processing, for two hours you work for Client A, and for two hours you work for Client B.” But I can do it if I do it on the back of technology, because my platform aggregates and creates air pockets that allow me to work for multiple clients. I can repurpose my platform to do multiple functions. With people, I can’t expect them to work more than eight hours.

What are the services that your company does?

We serve two broad segments. One is the public sector. We work with all 50 U.S. states and over 500 government entities worldwide. We do a lot of work in transportation. Think about parking: You use a parking app pay over the phone, and the phone reminds you after 45 minutes to pay more We are now handling road tolls—so think EasyPass in California and SunPass in Florida.

We are the world’s largest prepaid card processor. We do things like welfare, Social Security, Food Stamps. The other part of the business is commercial. We work with 74 of the top Fortune 100 companies. We support them on mission-critical systems.

Apple (AAPL) co-founder Steve Jobs once publicly criticized Xerox for not capitalizing on its technology.

Now that you’re an independent company, how do you balance spending on research into new technologies with pleasing investors?

Clearly today, technology is at a place where you don’t necessarily have to build components in-house; you can buy them from others. We have to rid ourselves of the sensibility we’ve had that if it’s not invented in-house it’s not worth looking at. We are now a public company, so our research dollars have to give a return in the year that I give the dollar in, unlike in the past in which the time to yield was like five to seven years.

Having said that, technology will be the underpinning of every process we bring. Therefore we must invest in our technology platform and make it modern. The speed of technology is changing and the way it is being consumed is dramatically changing in such a short time frame that our investments have to reflect that time horizon as well as the fact that these changes are happening.

Who are your biggest competitors?

We are in a wide range of industries, so we have a lot of them. A lot of them are very niche and specialized companies. Across our various businesses, we see as competitors like Accenture, we see IBM, we see HPE. My advantage is I’m a pure-play business process provider. I’m the largest in revenue and in size and scale.

How do you distinguish yourselves from the big business services groups of companies like IBM that may brag that their technology separates them from the pack?

Technology is a commodity. I can buy technology every other day at half the price I paid the day before yesterday. The technology product isn’t going to give you any differentiation. What gives you differentiation is what you do with that technology. If I understand processes and have functional and domain knowledge, then I can actually leverage that technology and literally make it jump through hoops to provide me the answer or the outcome that the business really needs.