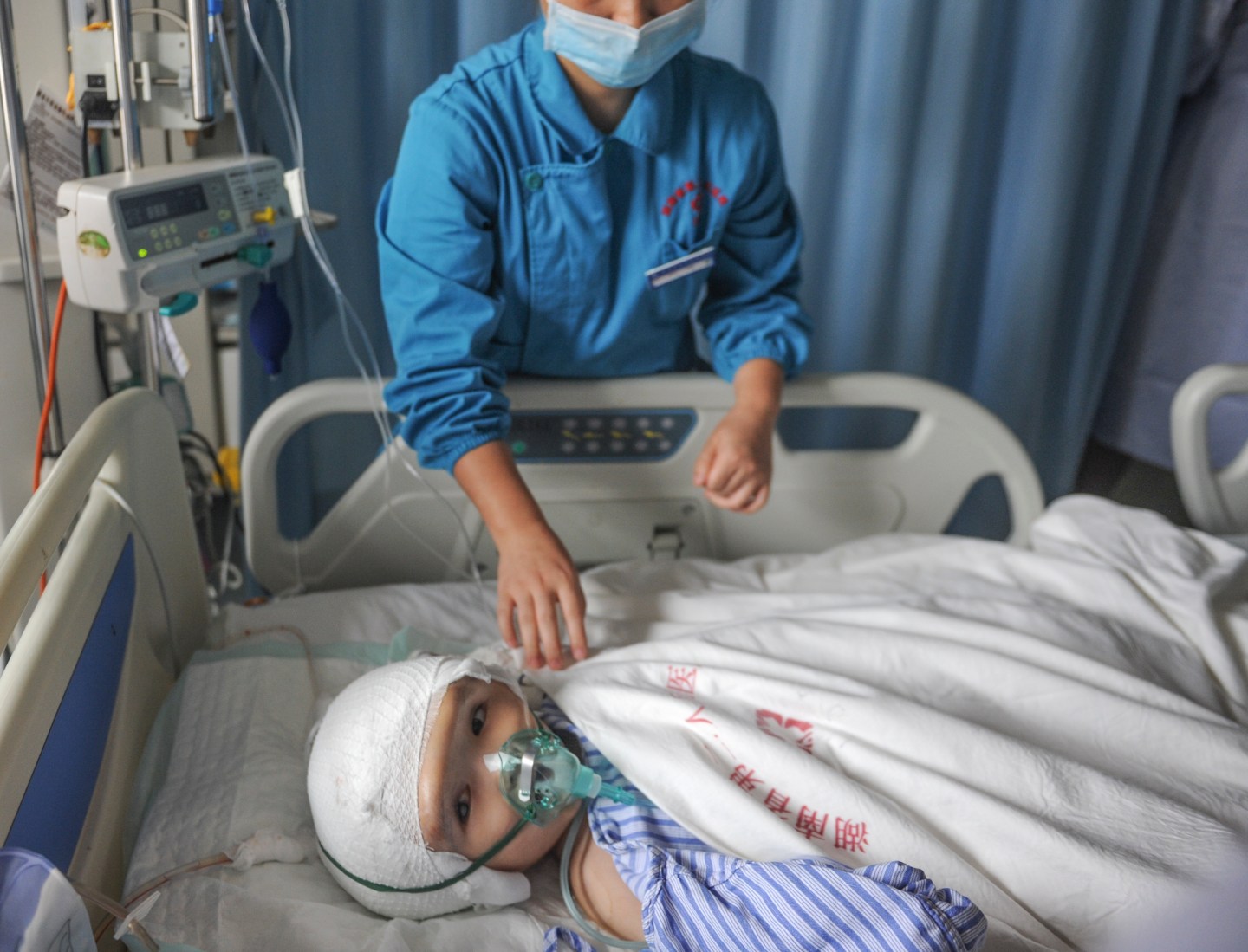 CHANGSHA, CHINA - JULY 15: (CHINA OUT) A 3-year-old girl named Hanhan lies in a hospital bed after receiving an operation that changed her oversized skull with a normal sized skull created with a 3D printer at the Second People's Hospital of Hunan Province on July 15, 2015 in Changsha, Hunan Province of China. 3-year-old Hanhan's congenital hydrocephaly (with 85 percent hydrocephaly) made her skull 3 times bigger than average. Doctors of the Second People's Hospital of Hunan Province used 3D printing technology to create a titanium alloy skull and successfully set it into Hanhan's head made duringa 17-hour operation. (Photo by Yang Xu/Xiaoxiang Moring Herald/ChinaFotoPress via Getty Images)
Photograph by ChinaFotoPress via Getty Images

As we look at a new year ahead with a new administration, it’s time to ask, what should we collectively be doing to improve our overall well-being. Should we decide to lose weight? Or to exercise more?

With this in mind, I would like to suggest an alternative focus for our New Year’s goals, one that engages with the core causes of health, taking the form of the following six resolutions, to truly improve the health of all.

Income determines the quality of our food, the safety of our neighborhood, the level of education we can afford to access, and our opportunities for economic and social advancement. The extent of its influence taans that the lack of income, or, worse, the accumulation of debt, can seriously undermine health.

Increasingly, more and more Americans are experiencing this disadvantage, a problem best characterized by the growing income inequality in this country. The Congressional Budget Office recently reported that, in 2013, 76% of all family wealth was concentrated among families in the top 10% of the wealth distribution. To tackle this problem, we have no choice but to focus on improving incomes for those in the lower fiftieth percentile. There are many ways we could do this. For example, we could do this by extending coverage of the Earned Income Tax Credit (EITC), a cash-transfer benefit for the working poor that ranges from approximately $500 to $6,2000 annually, depending on income and family size. We could also address this challenge by updating our estate tax, minimizing loopholes to ensure that all pay their fair share, and using the extra funds for projects that benefit the public good.

Work towards gender equity, both in the United States and abroad

In many countries, including the US, education and employment opportunities are unequally distributed between women and men, with women often at a disadvantage. These imbalances in gender equity are a threat to the health of populations. Education, employment, and income are all key determinants of health. Lack of access to these assets also means lack of access to the benefits that they can confer — benefits like power, social connections, and political agency.

Women must also contend with threats to their reproductive health. In the US, these threats include policy challenges to women’s right to abortions and safe reproductive care. Globally, women face difficulties like female genital mutilation and the cultural enforcement of rules governing marriage and childbearing. Resolving to improve these conditions means improving not only the lives of women, but of men, too. Gender inequity has intergenerational effects that shape the lives of families and communities. Leveling the gender playing field therefore means, ultimately, creating greater equity for everyone.

Income/wealth and gender equity gaps are both examples of the broader problem of social divides that undermine the health of populations, a central concern of public health. These divides shape health by creating barriers to the economic, social, and political resources that promote well-being. Race, for example, is a stubbornly persistent marker of social divides. In the US, black-white health disparities characterize a number of health challenges. Take obesity. Between 1976 and 2004, black women had a consistently higher obesity rate than white women. The challenge of HIV/AIDS provides another example.

We can now mitigate HIV through the use of several highly effective measures, from condoms to Tenofovir disoproxil/emtricitabine (Truvada). Within the context of these advances, the UN has set 2030 as a target date for “the end of AIDS.” Yet this may prove unrealistic, due to challenges to prevention posed by social divides. These challenges include stigma, as well as, in some cultures, a power imbalance between men and women, which can put women at greater risk of infection. Narrowing social divides would go far towards reducing these risks and safeguarding the health of vulnerable populations.

Improve education at all levels.

Education is perhaps the single most important determinant of population health. Lack of quality education can widen health disparities between groups, increase vulnerability to diseases, and shorten life expectancy. The better-educated enjoy better health for a number of reasons, chiefly due to education’s link to income, with all the attendant health advantages of earning more money. Education may also be associated with better life choices, and the avoidance of risky behavior. We can promote education through a broader investment in early education, which represents a chance to both widen access to quality schooling and deepen its influence throughout the lifecourse. With minority students often at a disadvantage compared to white students, an investment in education also means an investment in equity, maximizing the potential of education to create healthier populations.

In the US, 2016 was characterized by a number of high-profile acts of mass murder, where guns enabled hate-filled individuals to carry out attacks on populations. In addition to these well-publicized crimes, many thousands of gun-related incidents—often involving children—have led to an annual injury and death rate that is truly horrific. These statistics make it clear that any discussion about ending violence must engage with the challenge of guns, and their proliferation in this country. Our failure to do so is reflected by legislative inaction on this issue at the federal level. This failure is compounded by our inability to even study the problem—as a result of the current ban on Centers for Disease Control and Prevention gun research funding. Gun violence is a clear threat to the health and well-being of all Americans. If we are serious about promoting health, we should begin 2017 by addressing the problem of gun violence in this country through meaningful legislative action.

Globally, close to 5% of total years of life lost have been attributed to alcohol and illicit drug use. In the US, nearly half a million Americans died from drug overdoses between 2000 and 2014, with the opioid crisis, in particular, an all-too familiar driver of this mortality burden. The scope of this problem is perhaps best illustrated by the fact that, for close to a decade, drug-related deaths have exceeded motor vehicle deaths in the US. There are several solutions that could be applied towards mitigating the problem of substance abuse—from education campaigns, to making overdose prevention medication more widely available and teaching people how to effectively use it.

We must also confront the stigma that has thus far prevented us from embracing lifesaving measures, like safe injection sites, which could potentially make a dramatic difference in efforts to prevent addiction. By resolving to apply practical, data-based solutions to the challenge of substance abuse, we could generate real progress towards minimizing preventable health hazards in our society.

Resolutions are, of course, aspirational. Will we achieve progress on all of these in 2017? The recent election casts real doubt on how far we will get on these issues during the coming presidential term. The President-elect’s stated positions seem to be in opposition to many of the issues discussed here. But that does not make them any less important. It seems to me that the present uncertainty means that it is truly up to all of us to hold ourselves as a society accountable for what actually needs to happen to create a healthier world. If we can do so, we have a chance to build a future where each year is healthier than the last. Happy New Year.

Sandro Galea is the Robert A Knox Professor and Dean of Boston University School of Public Health.