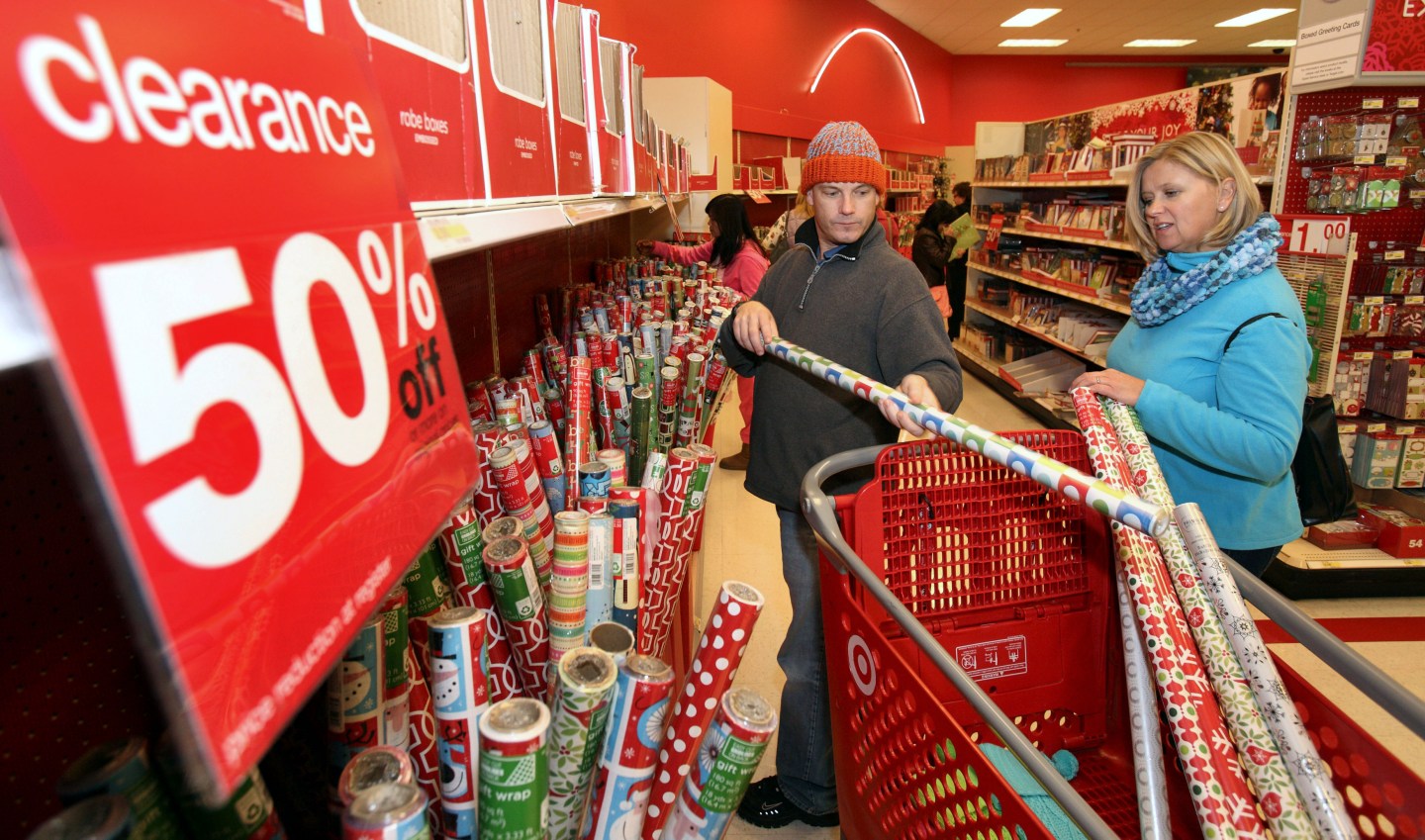 Robert and Yvonne McGillis of Oakland choose gift wraps, taking advantage of after-Christmas sales at a Target Store in the Bay Fair Mall in San Leandro, California December 26, 2011. Shoppers found a mixed bag of bargains and so-so deals on Monday, as a day off for many Americans and warm, dry weather lured some out for what was likely to be the third busiest shopping day of the holiday season. Chains were also hoping that shoppers coming in to redeem the millions of gift cards given as presents might be willing to spend a bit more cash of their own. REUTERS/Dino Vournas (UNITED STATES - Tags: BUSINESS) - RTR2VNDC
Dino Vournas / Reuters

A jump in consumer spending in the final stretch of December significantly offset a slow start to the U.S. holiday shopping season, and is likely to help many retailers beat sales forecasts, industry research groups said on Tuesday.

The December spending boost is in contrast to a muted November, when early holiday promotions and expectations among consumers that deals would always be available took a toll. Spending over the Thanksgiving weekend in November fell 3.5% from a year ago despite a strong jump in online sales, according to the National Retail Federation.

“It was a hot start with Cyber Monday, followed by a lull for the last couple of weeks and then a big-bang finish,” said Pete Madden, a director at retail consultancy AlixPartners.

Brick-and-mortar sales in the week ending Dec. 24 rose 6.5% year-over-year after having fallen for the rest of the month, according to data from analytics firm RetailNext.

Strong demand for furniture, home furnishings and men’s apparel from the start of November through Christmas Eve pushed U.S. retail sales up 4%, higher than the previously expected 3.8%, according to data from MasterCard’s (MA) holiday spending report, also released on Tuesday.

The report, which tracks spending by combining sales activity in MasterCard’s payments network with estimates of cash and other payment forms, offers an early look into how the holiday season shaped up. Official government data and results from retailers will not be available until next month.

The jump in spending prompted a prominent retail consultant to raise his holiday sales forecast. Craig Johnson, president of consultancy Customer Growth Partners, told Reuters that he now estimates sales growth of 4.9% in November and December, up from his initial estimate of 4.1%. Johnson said he expects this year to be the strongest since 2005, and sales momentum is likely to remain strong until the New Year.

There is growing evidence that an improving job market, lower gasoline prices and growing consumer optimism all contributed to the surge.

President-elect Donald Trump attributed the spending increased to his impending arrival at the White House.

“The world was gloomy before I won – there was no hope. Now the market is up nearly 10% and Christmas spending is over a trillion dollars!” Trump wrote on Twitter.

Whatever the reason, shoppers remained ebullient.

“I’m here just to shop,” said Eddy Flores, 46, as he lugged three bags stuffed with clothing through Macy’s in New York City. He was there to take advantage of post-Christmas deep discounts.

Despite the late-December surge, not every retailer will benefit. Department stores like Macy’s (M), J.C. Penney (JCP), Kohl’s (KSS) and others are still heavily discounting items, as growth in women’s apparel remained weak.

J.C. Penney offered the deepest average discount level of any retailer this year, according to retail pricing and data analytics firm Market Track.

Jewelry retailers also had a lackluster season that could hurt the likes of Tiffany & Co (TIF) and Signet Jewelers (SIG), industry groups said.

The verdict on electronics as a category remained mixed. MasterCard said electronics sales were weak while analytics firm Slice Intelligence said electronics was a top revenue-earner, with Best Buy (BBY) and Apple (AAPL) gaining share the week leading up to Christmas.