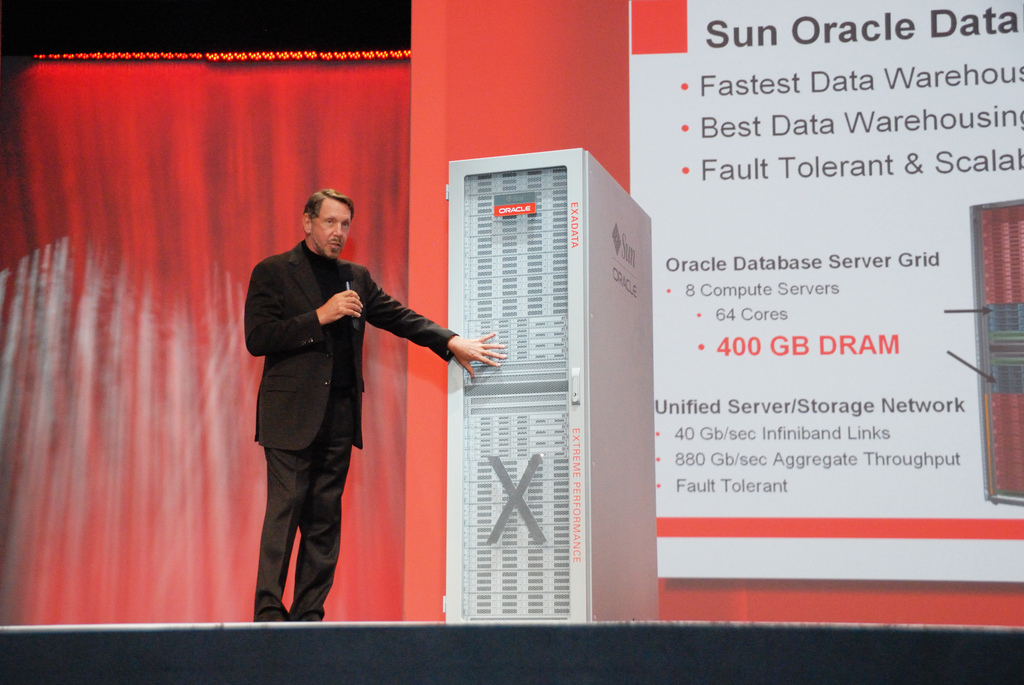 Oracle co-founder Larry Ellison talked a lot about wringing high software-like profits from the stingy server and chip businesses after paying $7.4 billion for Sun Microsystems and its hardware portfolio six years ago.

He and his team also argued that the acquisition would combine Oracle’s software strength with Sun’s hardware (and software) expertise to create a one-stop shop for business technology that would rival IBM (IBM) in its heyday.

But what followed was a series of quarters during which Oracle (ORCL) hardware revenue fell and then fell again.

Co-chief executive Mark Hurd has put the best possible spin on this, saying that Oracle sells its high-end servers at a profit, but that the company’s overall hardware sales fall because fewer people buy its lower-priced servers. In any case, it is hard to argue that Oracle’s overall hardware numbers are anything to brag about.

Fast forward to the second quarter earnings call late last week. Oracle’s total hardware revenue was down again, by 9%, to $497 million on product sales and $517 million for customer support. Then, Safra Catz, who shares chief executive duties with Hurd, acknowledged that the company is taking a look at that hardware business, the first public indication that changes might be afoot.

She did not elaborate other than to tell analysts on the call that the company is “proactively evaluating” expenses needed to sell hardware that runs on customer premises. That’s because more business customers are renting computing capacity on public clouds like Amazon (AMZN) Web Services—although she did not mention that name—instead of buying more of their own servers to run in house.

Given that more businesses are turning at least some of their IT budget over to third-party cloud providers like AWS, Catz’s statement makes sense. Another huge wrinkle is that most big companies now use other types of cloud providers like Salesforce.com to run their business applications instead of running them on their own hardware.

For more on Oracle, watch:

In the old days, say 10 or 15 years ago, a Fortune 500 company would buy a ton of new servers every few years to run its human resources, sales, email, and other corporate applications internally. But, that same company now is more likely to turn to Workday (WDAY) for its human resources software or Salesforce.com(CRM) for its sales software. These “software as a service” companies run the software on their own data centers and deliver it over the Internet to customers. They take care of the hardware and software updates themselves, freeing the customers from that concern.

And, customers have flocked to this sales model which is why older software companies like Oracle and Microsoft (MSFT) have pushed their own customers to use Internet-streamed versions of their own products that had previously run on premises.

Meanwhile, anonymous posts to the website TheLayoff.org, claim that Oracle is curtailing work on some Sparc chips and the Solaris operating system. Separately, Oracle insiders who requested anonymity told Fortune that the server group overall will likely see cuts.

Asked for comment, an Oracle spokeswoman said the company remains committed to Sparc chips, servers, and Solaris. She also reiterated that Oracle is always evaluating its businesses and options in light of changing market conditions.