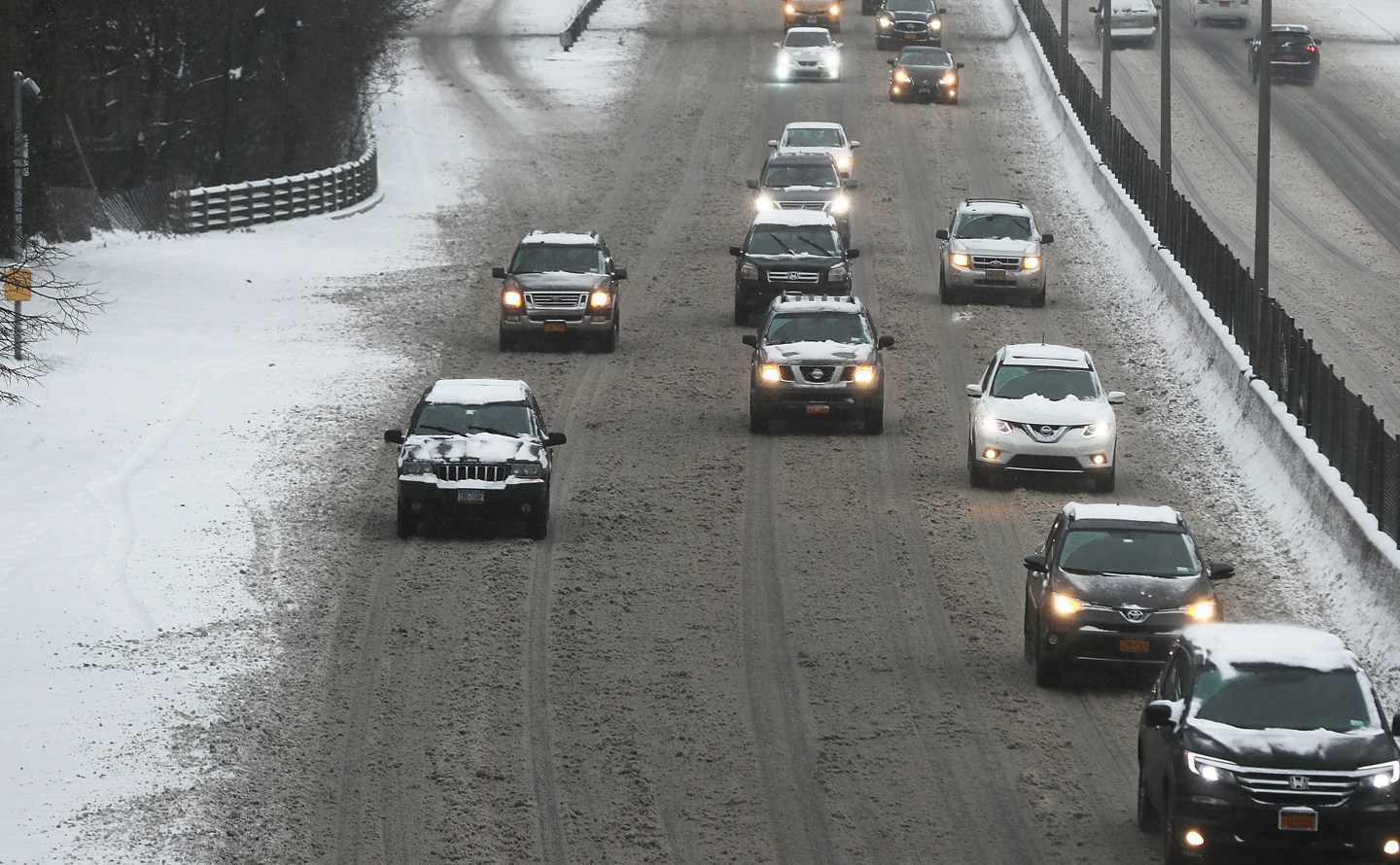 A winter storm of snow, freezing rain and bone-chilling temperatures socked the nation’s mid-section and East Coast on Saturday, causing hundreds of accidents on icy roads and putting a crimp on Christmas shopping.

At least five deaths were blamed on the slick roads and authorities were investigating a few other traffic fatalities as possibly weather-related. Perhaps the biggest accident happened in Baltimore, when a tanker carrying gasoline skidded off a highway and exploded, authorities said.

Two people died and at least 15 were injured in the 55-vehicle pileup on Interstate 95, Baltimore City Fire Chief Roman Clark said. He said it was too early to determine the cause of the crash.

“We have nothing but sheets of ice throughout the city, sidewalks,” Clark said.

It was unclear whether the pileup started before the tanker crash or was caused by it. The northbound lanes of I-95 were closed while crews cleaned up the mess.

The nasty weather put a damper on holiday plans for Luke Perez, who was hoping to make it home to Los Angeles on Saturday for a family party. Perez’s flight out of D.C., where he is in graduate school, was canceled, so he said he’s going to try again Sunday or Monday.

“My family has a Christmas party … and I was hoping to make it to that tonight, but that’s not going to happen anymore,” the 23-year-old said.

There were dozens of crashes in Indiana — two of them involving fatalities — due to freezing rain and ice, officials said. It was not immediately clear how many people were killed. The roads were so slick that authorities had to move motorists stranded on an overpass with a ladder.

In Ohio, a Columbus woman died Saturday when her car skidded off a slick road, authorities said. In another accident in Baltimore, six people were taken to the hospital after a crash on I-695 involving 15 to 20 vehicles, Baltimore County tweeted.

Temperatures plummeted and people braced for the cold. Temperatures in the Minneapolis-St. Paul area were expected to drop to minus-20 degrees overnight. People were advised to stay indoors for the weekend. The low temperature was expected to reach 4 degrees in Chicago on Sunday.

In Virginia, a Fairfax County firetruck slid off an icy road while responding to a crash, local news media reported. No one was injured.

Meanwhile, more than three dozen crashes and a fatality were reported in the northern part of the state, authorities said. Police said a man was found dead on the side of I-495, about a mile from a 23-vehicle crash. It appears the man was involved in the crash and had walked away from disabled vehicle. It wasn’t immediately clear how the man died.

In Colorado, up to a foot of snow fell in places, snarling traffic. Even weather-hardened locals apparently had trouble driving.

“I worked for the fire department for 45 years, and we used to call this highway hockey because people keep bumping into each other,” said Kevin Sweeney, of Brighton, a town about 20 miles northeast of Denver. “I think it’s that first big snow thing.”

In North Carolina, police and emergency workers reported more than 100 crashes overnight in Raleigh and Charlotte as the drizzle combined with temperatures below freezing to create dangerous icy patches.