Why Standing Rock’s Victory Is Fragile 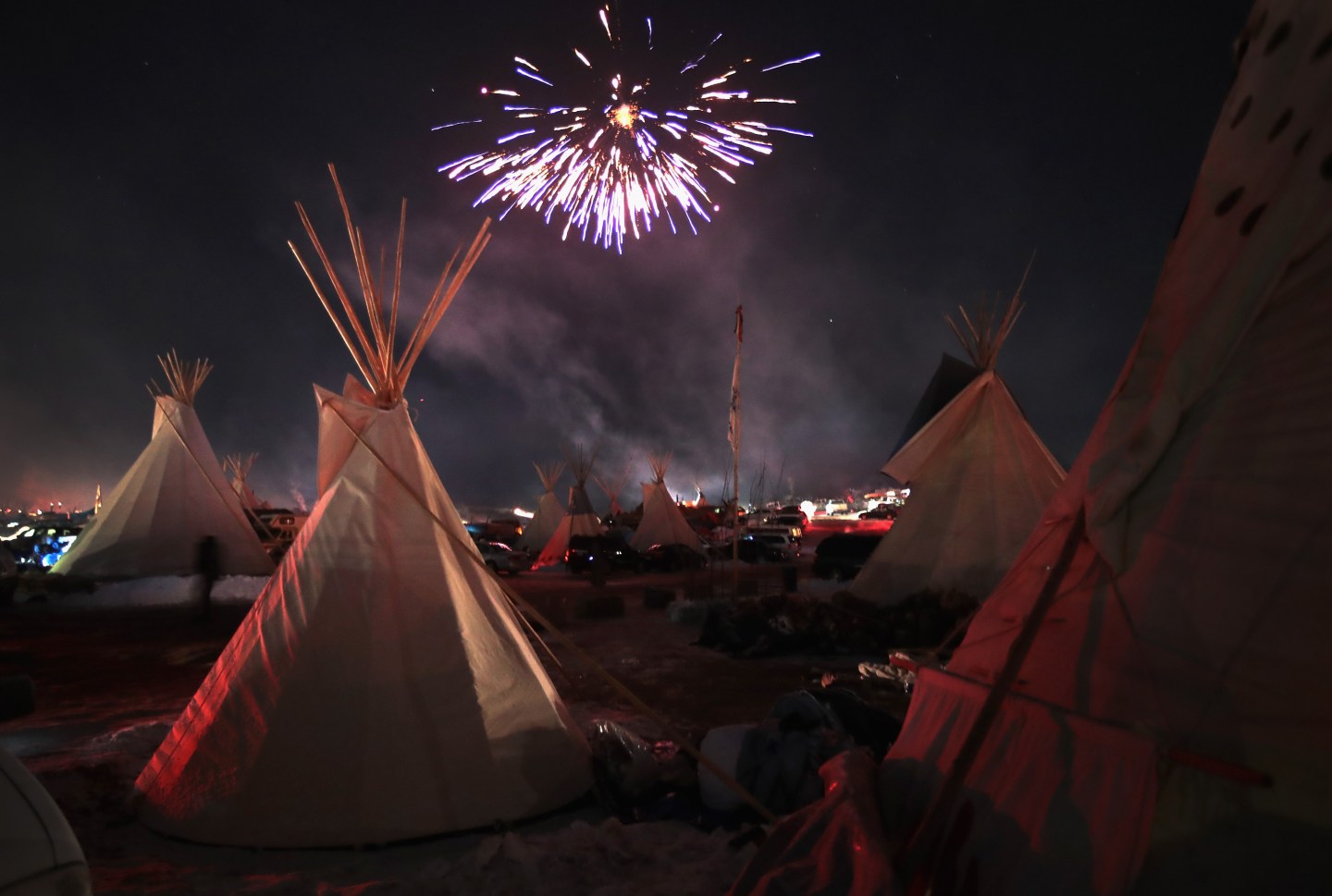 CANNON BALL, ND - DECEMBER 04: Fireworks fill the night sky above Oceti Sakowin Camp as activists celebrate after learning an easement had been denied for the Dakota Access Pipeline near the edge of the Standing Rock Sioux Reservation on December 4, 2016 outside Cannon Ball, North Dakota. The US Army Corps of Engineers announced today that it will not grant an easement to the Dakota Access Pipeline to cross under a lake on the Sioux Tribes Standing Rock reservation, ending a months-long standoff. (Photo by Scott Olson/Getty Images)
Scott Olson — Getty Images

The Standing Rock Sioux Tribe won a significant victory yesterday in its battle with Energy Transfer Partners, the company looking to complete a $3.7 billion oil pipeline through tribal lands.

The Department of the Army announced that it would not allow the pipeline to be drilled under a dammed section of the Missouri River, and would look for alternate routes instead.

“Although we have had continuing discussion and exchanges of new information with the Standing Rock Sioux and Dakota Access, it’s clear that there’s more work to do,” Army’s Assistant Secretary for Civil Works Jo-Ellen Darcy said in a statement. “The best way to complete that work responsibly and expeditiously is to explore alternate routes for the pipeline crossing.”

It is a substantial victory, but a fragile one, say the protestors.

Though the Army’s decision will likely trigger an environmental impact review that could take months or years to complete, the company building the pipeline has clearly indicated that it is not giving up its plans. “[We] are fully committed to ensuring that this vital project is brought to completion and fully expect to complete construction of the pipeline without any additional rerouting in and around Lake Oahe. Nothing this Administration has done today changes that in any way,” said Energy Transfer Partners in a statement.

The incoming Trump administration is more favorable to the pipeline builders, so both sides are now in a waiting game until January. President-elect Trump owns stock in Energy Transfer Partners but has said that his support has nothing to do with that investment.

For now, the protestors are continuing the fight. The organizers have declared every day in December “a day of #NoDAPL action,” and are maintaining a list of solidarity actions.

And despite the harsh winter, the encampment continues to grow, a living symbol of collaborative organizing in divisive times.

“We know that the next presidency stands to jeopardize our work but we are by no means backing down. We will continue protecting everywhere we go and we will continue to stand for all our relations,” said Eryn Wise of the International Indigenous Youth Council in a statement.

“We say Lila wopila [many thanks] to everyone who has supported the resurgence of indigenous nations. This is just the beginning.”