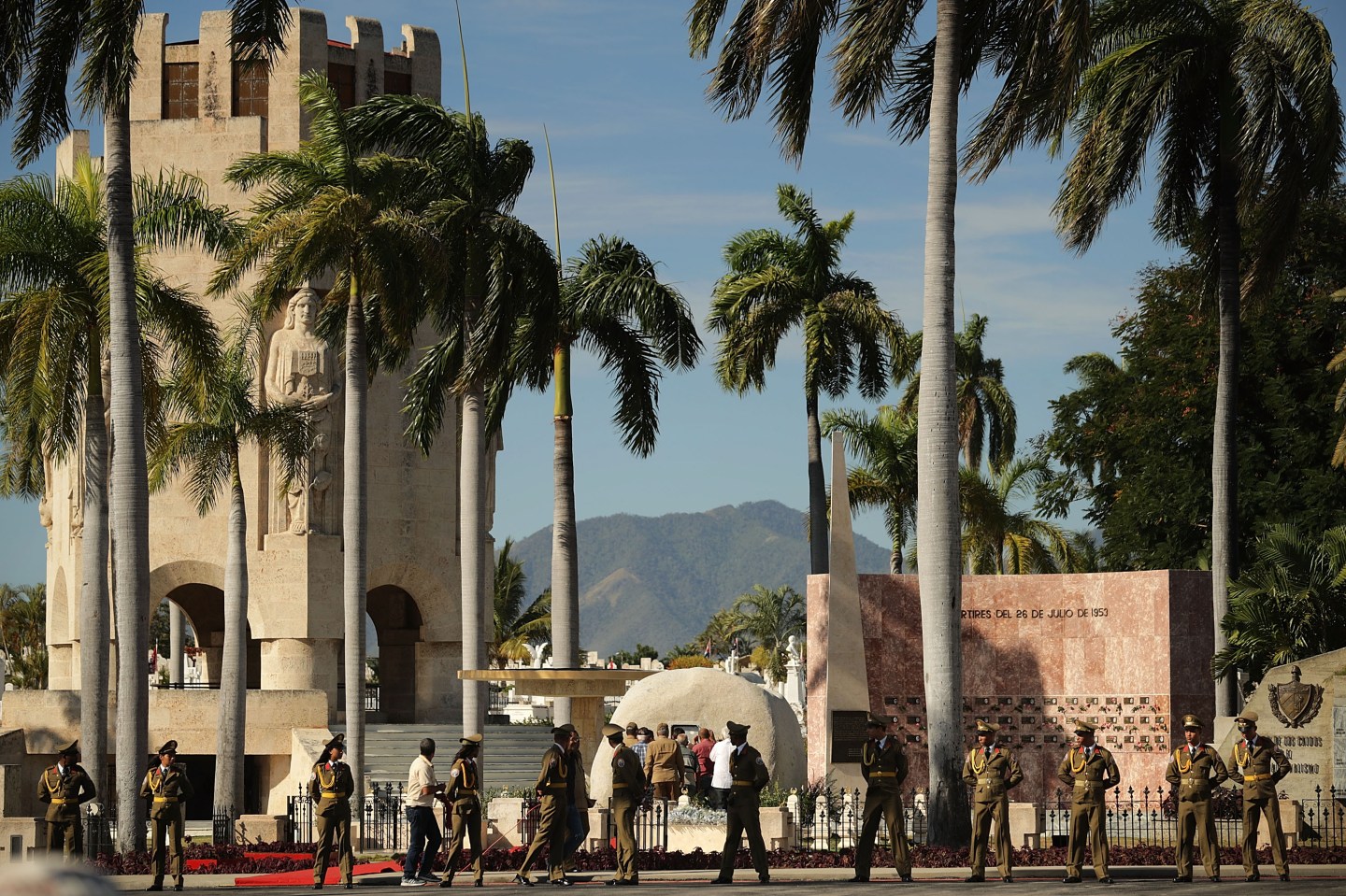 SANTIAGO DE CUBA, CUBA - DECEMBER 04: Workers place a plaque with the word 'Fidel' on the tomb holding the remains of former Cuban President Fidel Castro in the Cementerio Santa Ifigenia where he will be buried December 4, 2016 in Santiago de Cuba, Cuba. Sunday marked the last of a nine-day mourning period after Castro died November 25 at the age of 90. (Photo by Chip Somodevilla/Getty Images)
Chip Somodevilla Getty Images

Fidel Castro’s ashes were laid to rest on Sunday, capping nine days of official mourning when hundreds of thousands of Cubans said farewell with a combination of tears, Castro-like defiance and choruses of “I am Fidel!”

A private ceremony was held at Santiago’s Santa Ifigenia Cemetery, state media reported. Castro’s cremated remains were due to be placed a few steps from the mausoleum of independence hero Jose Marti, another towering figure of Cuban history who Castro long admired.

Castro, who had been out of power for a decade but never far from the center of public life, died on Nov. 25 at age 90.

In his final years he wrote a periodic column on world and local matters and received foreign dignitaries at his home on the outskirts of Havana.

Castro gave Cuba an outsized influence in world affairs. He was feted by Nelson Mandela for helping to end apartheid at a time the West supported the racist system, but helped take the world to the brink of nuclear war during the Cuban missile crisis.

How Trump Could Embolden Cuba’s Hardliners

Forced to step down due to an intestinal ailment, Castro ceded power to his younger brother Raul, the current president, at first provisionally in 2006, then definitively in 2008. Cuba has not revealed the cause of his death.

In keeping with his wishes, Castro’s image will not be immortalized with statues and public places will not be named after him, his brother said on Saturday.

Initially the ceremony at the cemetery was due to be carried live on television, but hours before official media announced it would be “solemn and private.”

Castro’s memorial at the cemetery is a large, round stone placed close to, but dwarfed by, Marti’s mausoleum, according to a Reuters witness. It is a few steps from a monument to rebels who died fighting in Castro’s failed 1953 attack on the Moncada barracks in Santiago, the start of the revolution.

Cuban television cut from live coverage at the appointed hour of 7 a.m. EST (1200 GMT). At that moment in Havana, military cannons unleashed a 21-gun salute that thundered across the capital city.

For more on Castro, watch:

Seeing greatness in himself long before taking power, Castro created his own, enduring persona, and played the role with a flourish throughout his long public life.

He was at various times a triumphant revolutionary, an indefatigable speaker, and a military strategist. His larger-than-life character instilled Cuba with pride and national identity, while also generating acute hatred among his enemies.

It even came with its own wardrobe and props: olive green fatigues and military hat, boots and a beard, and, until he quit smoking in the 1980s, a long lancero cigar.

He ruled for 49 years, longer than any contemporary except for Queen Elizabeth of England, after overthrowing a U.S.-backed dictator in 1959. He went on to align Cuba with the Soviet Union and sustained a near-permanent confrontation with the United States, sending both doctors and soldiers overseas to burnish Cuba’s revolutionary character.

In recent years, Cuban doctors have been widely praised for their quick deployment in international health crises, including the Ebola outbreak and the aftermath of Haiti’s 2010 earthquake.

Even after ceding power to his brother Raul, now 85, Fidel was a guiding light to leftists and anti-imperialists around world and a lightening rod for the barbs of his critics, who loathed him for confiscating private property, jailing opponents, and shutting down almost all dissent.

The impact of his long clash with the United States is still being felt. Cuban-Americans in Miami celebrated his death, and Washington maintains a trade embargo that Castro long used as the reason for Cuba’s economic troubles.

U.S. President Barack Obama changed course on U.S. policy toward Cuba in December 2014, agreeing on a prisoner exchange, declaring his intent to restore diplomatic ties and asking the U.S. Congress to end the embargo.

Fidel Castro gave begrudging approval to the detente brokered by his brother. He did not meet Obama during his historic visit to the island, instead penning a column that warned Cubans not to trust the president’s “honey-coated” words.

President-elect Donald Trump has threatened to reverse Obama’s rapprochement after he assumes the White House on Jan. 20 unless Cuba enacts internal changes, the kind of pressure both Castro brothers have vehemently rejected.