The Inventor of General Tso’s Chicken Dies at 98 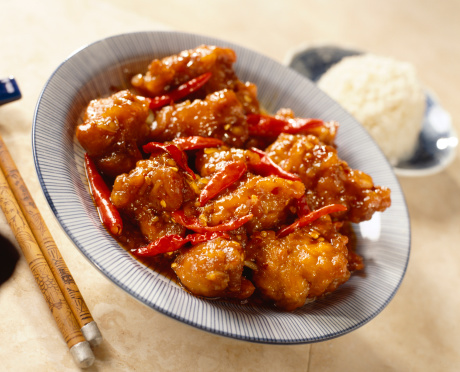 Lovers of the classic Chinese-American General Tso’s chicken have cause to lament.

Chef Peng Chang-kuei, creator of the popular fried chicken dish served in a sticky sweet and sour sauce, died on Tuesday, the Taiwan News reports. He was 98.

Peng reportedly created his dish in 1952, for U.S. Admiral Arthur W. Radford, who was then visiting Taiwan with the U.S. Seventh Fleet. Peng was running through standard Hunan dishes when he decided to improvise. Radford was said to have been so impressed with the dish that he asked Peng the name for it. On the spot, Peng called it General Tso’s chicken in honor of General Zuo Zongtang, the famous 19th century Chinese military leader.

In 1973, Peng opened an eponymous restaurant in New York City near the United Nations that served General Tso’s and other Hunan specialties to world leaders and politicians including former Secretary of State Henry Kissinger. A New York Times review of Peng’s in 1977 called General Tso’s chicken, “a stir‐fried masterpiece, sizzling hot both in flavor and temperature.”

General Tso’s became the most widely known Chinese food in the U.S. in the 1970s and 1980s, according to the book From Canton Restaurant to Panda Express, a History of Chinese Food in the U.S. Over time, the dish turned sweet and included vegetables such as broccoli to accommodate American tastes, somewhat to the dismay of Peng, the book’s author writes.

Related: Why This Lebanese Street Food Is Gaining Traction in the U.S.

November has been a cruel month for American lovers of classic take-out food dishes.

Peng’s death followed the death earlier in the week of Jim Delligatti, a McDonald’s franchise owner in Uniontown, Pa., who invented the Big Mac in 1967. Delligatti created the double-decker sandwich to compete with other fast food restaurants in the area. McDonald’s sells more than half a billion of the sandwiches annually, the New York Times reports. Delligatti was also 98.