Why This Lebanese Street Food Is Gaining Traction in the U.S. 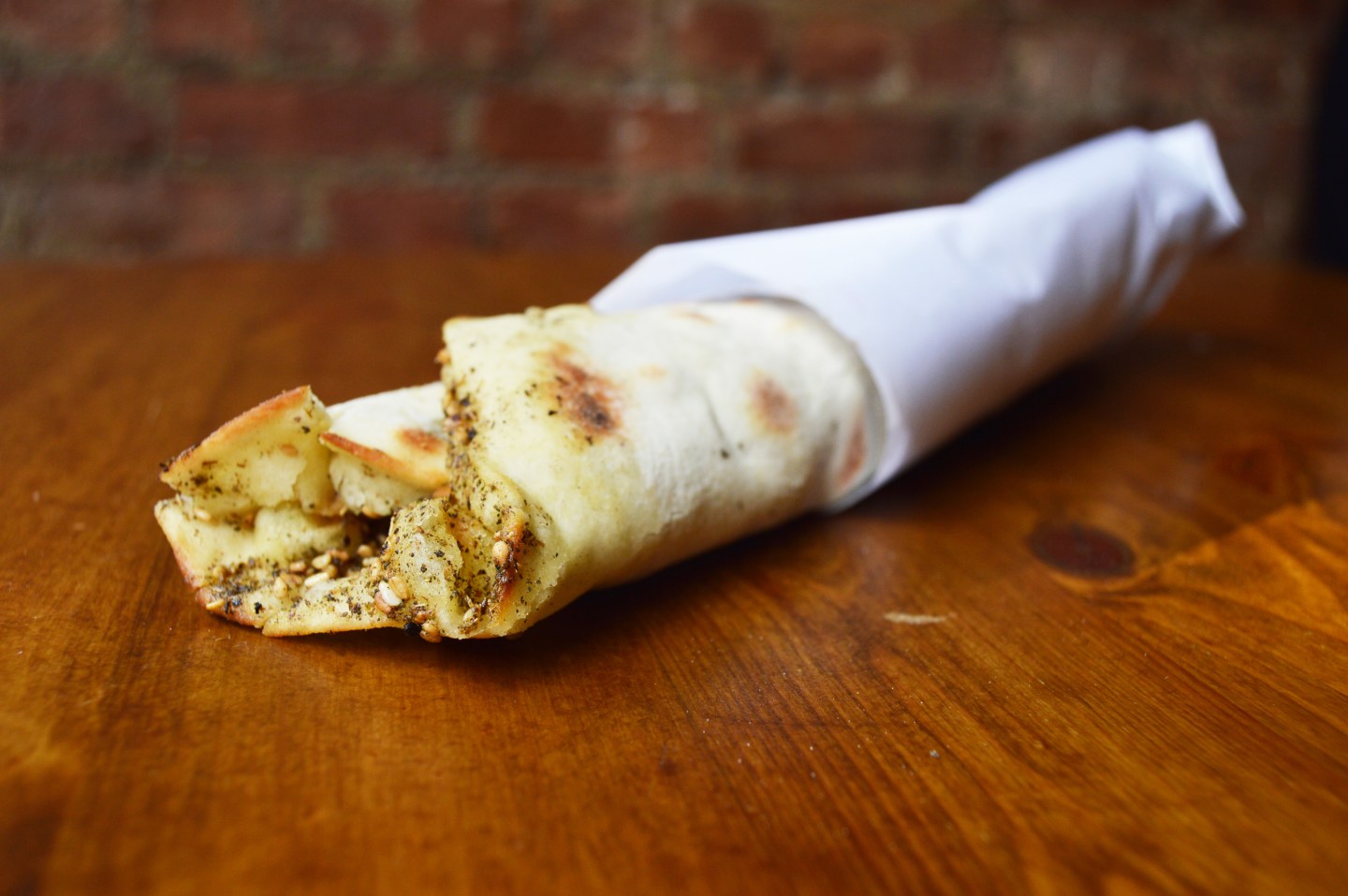 In Lebanon, the manoushe is omnipresent — a flatbread best served fresh from the corner bakery’s oven and eaten on the go. It’s typically slathered in zaatar, a thyme herb mix with sesame seeds, often with dollops of labneh, a tangy thick yogurt. Despite the waves of Lebanese immigrants who have immigrated to the U.S.and made manoushe at home or at local bakeries, it has yet to be widely available to the general public.

But that’s changing. A handful of immigrant entrepreneurs have launched manoushe-centric businesses in city centers across the country geared towards a diverse customer base—and they’re flourishing.

“Somebody needed to do it,” laughs Ziyad Hermez, 32, the owner of Manousheh NYC, New York City’s only “manousherie” (falafel, hummus, and other regional staples like baba ganoush, are not on the menu). At the tiny, sleek, glass-front eatery — which opened in March 2015 in the trendy West Village — a carefully curated mix of American indie-pop songs and Arab classics play over the speakers. Hermez and his employees dress casually, speaking in English with a sprinkling of Arabic. Customers range from curious passersby who probably couldn’t locate Lebanon on a map, to NYU students, to natives of Lebanon and the surrounding region who are living or traveling in New York.

A young woman visiting from Lebanon nibbles on a manoushe. “If I close my eyes, it’s like I’m in Beirut,” she says.

Amid the scent baking bread, which wafts from the colossal central oven, Hermez, who is of Lebanese descent but grew up in Kuwait, explains that the inspiration for Manousheh NYC was simple: Longing. When he moved to Washington, D.C., for college in 2002, he was astonished he couldn’t find a fresh baked manoushe (sometimes spelled manousheh, mana’oushe, man’oushe, and man’oushé in English). The hunt continued when he moved to New York City and was working in IT.

He missed the taste of a freshly baked manoushe and the intimate experience of walking into the neighborhood bakery that sold them. And he felt New York City was ripe for a manousherie; the flatbread is the perfect snack—like a slice of pizza, a bagel, or falafel—for busy city dwellers eating on the go.

Today, business is brisk. Each manoushe at Manousheh NYC sells for $5 to $8, and customers can choose from a number of styles, including a daily special and “lahem bi ajine,” which is topped with minced beef, tomato and spices. Hermez estimates he sells an average of 200 manaeesh (the plural of manoushe) per day.

Over on the West Coast, Reem Assil has been selling manaeesh at pop-ups, catered events, and a local farmer’s market in San Francisco for several years. She offers a few non-standard artisanal toppings like pickled turnips, but uses the traditional, albeit slow, domed saj grill, which is similar to an upside-down wok. At the farmer’s market, customers of all types patiently wait in line.

“We’re making a little extra effort to translate, but not water it down,” she explains.

Related: How to Find a Female Mentor in a Sea of Male Entrepreneurs

Assil, 33, was born in America to Syrian and Palestinian parents and grew up outside Boston, eating homemade manaeesh. She believes the fresh baked flatbread has the potential to take off in the U.S., especially because buying food is no longer just “transactional” for the millennial generation. According to Assil, “it’s about the experience.”

Having raised $50,000 on Kickstarter as part of an OpenTable competition for aspiring restaurant owners (which she won), Assil is planning to open a cafe selling Arab street foods in Oakland this fall.

Jay Hosn, a Lebanese immigrant who arrived in the U.S. in the early 1970s, is the owner of Goodie’s, a Mediterranean specialty food shop in Northern Seattle. He began making and selling fresh manaeesh in January 2014, because he, like Hermez, missed the taste. Having previously lived in Southern California, with its sizable Arab and Arab-American communities, he could buy a manoushe “every mile.”

When Hosn launched his manaeesh endeavor in a corner of Goodie’s, the business exploded. He even paid for a baker to come from Lebanon to teach manoushe making for a week. Eventually, Man’oushe Express replaced Goodie’s, which has since moved downstairs.

“I am very surprised,” says Hosn of the manoushe’s instant popularity. He guesses 40 to 50% of his customers are American-born with no connection to Lebanon or the surrounding countries. “They’re hooked on it!” he says with delight.

None of these manoushe entrepreneurs know why previous generations of Lebanese immigrants didn’t market the fresh baked manaeesh to the general public. Some believe it was the scarcity of good zaatar in the U.S., others guess they figured manoushe, which is considered a simple street food and is often eaten for breakfast, wouldn’t translate.

But in 2013, with the U.S. publication of Man’oushé, Inside the Street Corner Lebanese Bakery, a beautiful, coffee table-style cookbook by Barbara Massaad, the manoushe received a dose of mainstream publicity.

“People used to make fun of me,” Massaad recounts, speaking from Beirut. When she started working on the project, everyone thought an entire cookbook dedicated to the common manoushe was odd. But Massaad’s loving and respectful treatment, visible in her gorgeous photos and 70 recipes, has since elevated the manoushe, even in Lebanon. Assil calls Massaad’s cookbook her “bible” and Hermez proudly displays it on the counter of Manousheh NYC.

Related: What Obama’s New Proposal Would Mean for Immigrant Entrepreneurs

Time will tell if manoushe eateries will become part of the U.S’s cultural and economic fabric, as so many other establishments selling international food have. Early signs are promising: Hermez has received franchising inquiries from Los Angeles, Toronto, Montreal, Berlin and Amsterdam.

While he believes Manousheh NYC’s success can eventually be replicated in cities globally, he’s focusing on the one store. “It’s way too soon,” he says. The franchise offers can wait — for now.